Turkish artist in Netherlands: Bringing tangibility to an intangible world 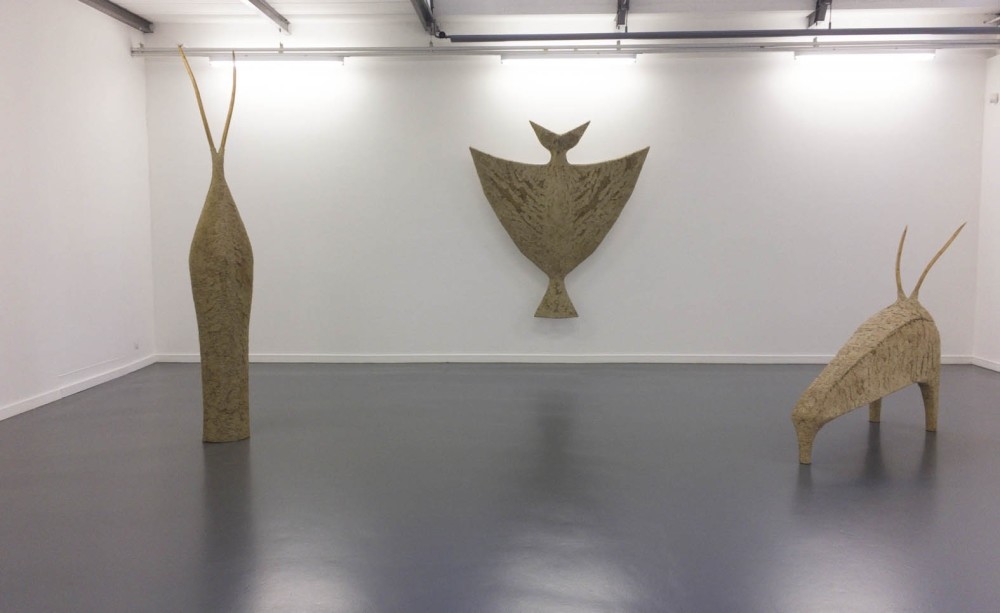 Inspired by Islamic scholar and mystic poet Mevlana Celaleddin Rumi, Yiu011fitou011flu uses Islamic & Anatolian culture as a reference point for her art forms. Her sculptures aim to decipher the intangibilities of the spiritual world and make them tangible.
by Cihad Caner Dec 07, 2016 12:00 am

Revolutionary Turkish artist Esma Yiğitoğlu, who draws inspiration from the teachings of Rumi, is being featured at TENT art gallery in Rotterdam with an exhibition featuring her works, transforming the art space for foreigners in the Netherlands

Turkish artist Esma Yiğitoğlu's last exhibition was opened in the TENT gallery in Rotterdam in October. The daughter of famed Turkish politician Ali Kemal Yiğitoğlu, the artist was born in Kayseri in 1944 and died in Rotterdam in 2009. One of the first Turkish artists to attend the well-known Dutch art school Willem De Kooning Academy in the city, Yiğitoğlu's works include sculptures, paintings and drawings created from natural materials such as loam, terracotta and handmade paper.

The exhibition, the last part of a series featuring underexposed Rotterdam artists, is the result of a collaborations between TENT gallery and the Museum Boijmans Van Beuningen. Noor Mertens from the curatorial team at the Dutch museum is the curator of the exhibit. 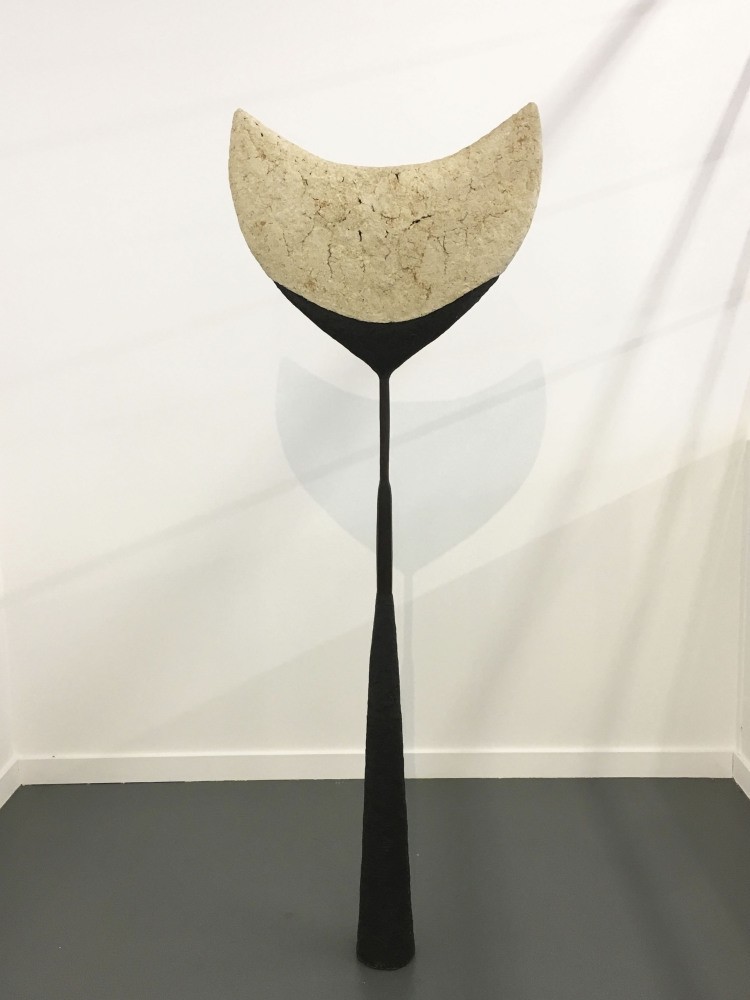 The city of Rotterdam is home to the largest population of Turkish immigrants in the Netherlands, making this exhibit even more significant for the locals there. The exhibit offers a new perspective for Dutch locals, who typically associate the Turkish community with the working class. One of the materials used in Yiğitoğlu's works, loam, has a strong scent which filled my nostrils as I entered the exhibition. This nostalgic material is typically used in Turkish villages in rural areas and Yiğitoğlu's use of this unique material to make large, abstract sculptures and shapes hints of the artist's nostalgic feelings for Turkey. I was instantly taken back to my times visiting villages in Turkey and memories came to my mind as I smelled the scent of the material. When I finally saw the sculptures, my reaction was compounded by my own nostalgic memories and left me with an indescribable feeling that, in my opinion, reflects what it means to live at the crossroads between the East and the West, "between two worlds."

Inspired by Islamic scholar and mystic poet Mevlana Celaleddin Rumi, Yiğitoğlu uses Islamic and Anatolian culture as a reference point for her art forms. A vast portion of her art was inspired by the teachings of Rumi, whom she acknowledges as a great master and inspirational figure. The artist also incorporates early-Islamic architecture, Islamic graves, minarets and mosques attest to her inspirational sources. For Yiğitoğlu, "Graves have a protective function during the voyage through the unconscious regions of the spirit." Some of her sculptures reminded me of the first loam mosque in history, the Djenne Mosque in Mali. This influence can be clearly seen in the small, minaret-shaped terracotta sculptures in the exhibition. Yiğitoğlu's sculptures aim to decipher the intangibilities of the spiritual world and make them tangible. 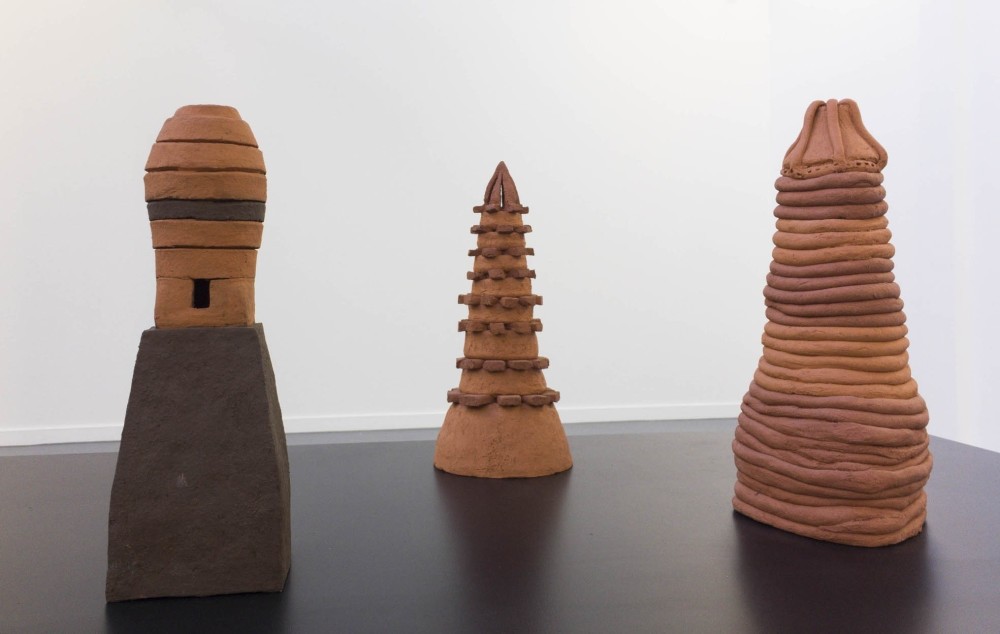 I believe that the artist's use of unique materials, including loam and terracotta, was inspired by one of Rumi's most famous sayings, "I was raw, I became cooked and I was burned." There are three steps to make matter or form out of earthy materials. First, you shape the raw material, such as clay or terracotta, before placing the raw objects in a "kiln," a type of oven, to cook. After solidifying, you apply glaze to the surface of the objects to give them their last touch before placing them in a kiln again to burn. According to her, "This process is a way to release an intangible element from the bounds of matter because transforming the material will provide shelter and protection to the secret world within."

Yiğitoğlu's abstract paintings in the exhibition make it appear as though she made her paintings on earth and framed them, using terracotta and its derivatives as paint. A sense of warmth and depth were the feelings that arose inside me as I encountered the paintings. I dove into these paintings and lost myself in a sense. These art forms do not dictate the subject that drives them; rather, they are a free space of interpretation that was Yiğitoğlu's way of leveling the abstract. In that regard, I believe that her choice to title this collection "Traces" was befitting.

What makes her even more interesting is that in addition to her artistic practice she also played an important role in the Turkish community in the Netherlands by founding a Turkish Cultural Center for women in the early 1980s during a period of unrest among the Turkish community in Rotterdam. Faced with increasing tensions and socioeconomic challenges, the struggles of the community inspired Yiğitoğlu to organize various exhibitions about Turkish culture. Foreign workers, or"gastarbeiders" as they were called in those days, were given a face, and the group was excited to establish a place for themselves in Dutch society while maintaining their own identity.
RELATED TOPICS