114 years of aviation history on display in Istanbul 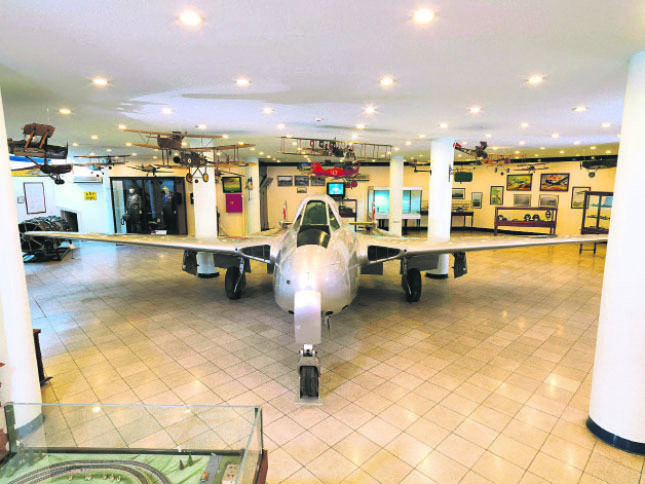 History offers us little information concerning humanityu2019s passion for flying, but the Rahmi Kou00e7 Museum sheds some light on the known history of aviation with its aeronautical collection.
by Zeynep Esra İstanbullu Jan 02, 2017 12:00 am

It has been 114 years since the Wright Brothers made their first flight in the town of Kitty Hawk, North Carolina. After a 3.5-second-long failed attempt on Sept. 23, 1903, they flew a distance of 36.6 meters (120 feet) for 12 seconds, making the first flight in human history. Now, Rahmi Koç Museum has invited visitors to come and share in the rich history of aviation.

Leonardo da Vinci, Ibn Firnas, Hezarfen Ahmet Çelebi, Otto Lilienthal and İsmail Cevheri were historical figures who had one common passion: Flying. History offers us little information concerning humanity's passion for flying, but the Rahmi Koç Museum sheds some light on the known history of aviation with its aeronautical collection.

The museum has a variety of aeronautical materials on display, including a Douglas DC-3, which is one of the most important aircraft of all time, as well as an F-104S Starfighter and trainer, reconnaissance, fighter and bomber aircraft types in the Mustafa V. Koç / Lengerhane Building. These were British, German, French and Italian aircraft used by pilots and original aircraft engines in the late 19th and early 20th centuries. The following are a few examples of what can be seen at the exhibition:

The diorama is a model that represents the first flight by the Wright Brothers on Dec. 17, 1903, created by Aykut Suavi of Istanbul.

Welcoming visitors at the museum's entrance, this fighter aircraft is definitely one of the symbols of the museum. Produced under the license of Fiat in Italy in 1974, the aircraft was used by the Turkish Air Force for 20 years. While its short and extraordinarily thin wings offer a high performance, with speeds exceeding 2.2 Mach, they make it hard to control the aircraft, which lead to many pilots losing their lives during flight training. It has been donated to the museum by the Turkish Air Force.

Being one of the most important aircraft of all time, the Douglas DC-3 first flew in 1935. The backbone of civil aviation in 1940s and 1950s, the aircraft has become one of the most favored and successful aircraft in history. The aircraft was used in the United States Air Force as a military C-47 Skytrain, and then changed to a DC-3. It was donated to the museum by Nedim Sulyak.

First flown in 1943, the British De Havilland DH100 Vampire was used by the Royal Air Force during World War II. Named the "Spider Crab" because of its shape, the aircraft is the last example of composite wood and metal materials being used in high-performance military aircraft production.

Jet Provost is a trainer aircraft that was used by the Royal Air Force from 1955 to 1993. These aircraft were produced by the Hunting Company, which was then part of the British Aviation Corporation (BAC), and developed from the Percival Provost, which was a piston-engine basic trainer aircraft. The Rolls Royce Viper 101 was used as the engine of the aircraft on display in the museum.

It is one of the 178 Liberators that flew from Benghazi on Aug. 1, 1943, which is also known as "Black Sunday," to bomb oil refineries in Ploesti, Romania. After it bombed the target and was hit by a German fighter aircraft, it attempted to land in the Royal Air Force airfield in Cyprus, but made an emergency landing at sea near Antalya. In 1955, the aircraft was retrieved with the help of Roy Newton, one of the seven survivors, and put on exhibition after restoration.

The J79 Turbojet engine belonged to an F-104S Starfighter aircraft that was produced by General Electric in the U.S. in 1963 and is exhibited in the garden of the museum. When the afterburner is used, it has an impulse of 79.3 N. The aircraft was donated to the museum by the Turkish Air Forces.

Rahmi M. Koç Museum is an important museum dedicated to the history of transportation, industry and communication in Turkey. It has an area of 11,250-square-meters (121,094-square-feet) with two historic buildings, the Lengerhane Building and Hasköy Shipyard. It was originally founded in the Lengerhane Building in 1991 and underwent a three-year-long renovation process. Opening in December 1994, the museum was a quick success, and Hasköy Shipyard was purchased near Haliç in 1996. Fourteen desolated buildings and a historic sledge were renovated based on the original plans, and the second part of the museum opened in July 2001. The museum's collection includes thousands of objects, ranging from a gramophone needle to life-size ships and aircraft.
RELATED TOPICS