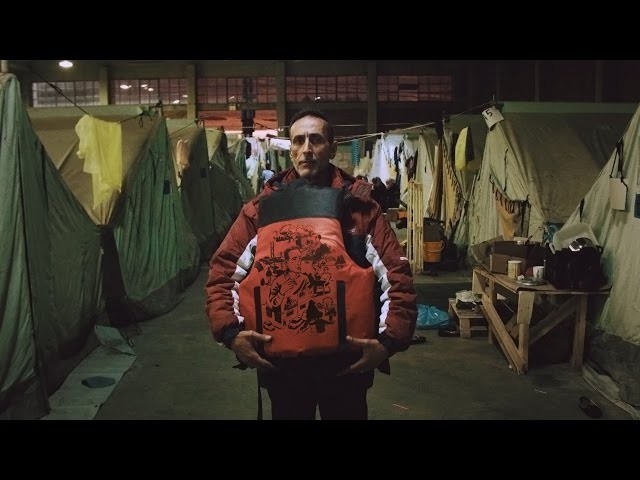 European NGOs and volunteers are calling for the displaced to be viewed as people and not merely refugees with their new art project, ‘Project Life Jacket.' By interviewing nine people, the project aims to remind the world that displaced people are no different from the rest of us

We left a horrible year behind us, hoping 2017 would give mankind a clean slate, however, the Syrian civil war still continues with all its rage and Syrians are still en route to a new life, stigmatized with a label: "Refugee." A group of volunteers and the nongovernmental organization (NGO), the Voice of Thousands, realized that the media coverage of the refugee crisis in Europe has been on the decline, as if the crisis is now over. To be able to draw the attention of Europeans back to the problem that is unlikely to fade away any time soon, the volunteers decided to focus on the people labeled as "refugee," as these people were all once a part of a community and had lives.

The world is aware of the dire conditions of the refugee camps. To solve this problem, Greek volunteers transformed an old and abandoned textile factory into a refugee shelter where nearly 1,000 Syrians are residing. "Project Life Jacket" focuses on the lives of nine refugees who are waiting for a transit in their factory-turned-refugee-home. Swiss artist Matthias Leutwyler used life jackets as his canvas and drew happy moments from these refugees' lives with ink, as a reminder of their previous lives before they had to flee their country.

Speaking to Daily Sabah, a spokesperson for the project, Natalie Eggen, said the orange life jackets have been symbols of the refugee crisis from the beginning. "Everybody knows the pictures shown in the media with masses of life jackets at the beaches of Greece and other places. But what those jackets really mean to those people who had to flee, nobody realizes. The drawings on the life jackets bear witness to their lives before the war, their lives before they had to put on a life jacket, and with that, the stigma of 'refugee.' Regarding the naming of the project: We used the word 'Life Jacket' in a dual sense - we used the life jackets to show their life stories," she added.

The nine Syrians, who, apart from being a refugee, are also either a mother, father, lawyer, photographer, rather than a "refugee" only, are interviewed by Michael Grossenbacher, the co-founder of the Voice of Thousands, which has been active in Greece for a while now. The interviews were also recorded on video, where the Syrians talk about their previous lives, drawing attention to the fact that they are people just like everyone else.

Abeer, 25, is one of the nine Syrians who was interviewed at the refugee camp in Greece. She was living in the Syrian city of Daraa, located about 13 kilometers north of the border with Jordan. She studied English at the University of Damascus and her only dream was to teach children. However, before she even began teaching the future of Syria, the bombs began to fall from the sky and she had to leave her beloved country. During the interview, Abeer remembers the good, old happy days with her husband and the day she gave birth to her daughter. When she was asked about her memories about Syria, tears ran down from her eyes, saying she cannot even describe how beautiful her country was and how secure she used to feel. Now, she is on her way to a new life, fearing going back to her country. Artist Matthias Leutwyler portrays Abeer on the life jacket as a happy mother and wife, teaching other children in the classroom.

Eggen said the main focus of the project is to bring the refugee crisis to European people's attention once again and make them realize people who are labeled "refugees" are human beings just like anyone else. "We are trying to change the talking point within the refugee crisis. From the flight, the situation in the camps back to the human beings themselves. We want to bring the human being who is suffering the most from the crisis in the focus of attention," Eggen added.

The nine life jackets painted by Swiss artist Leutwyler were exhibited in Switzerland and the project initiators are planning to organize more events and exhibit the project as much as possible all over Europe. However, they are not intended to keep the jackets to themselves. Once the interviewed Syrians reached a safe haven, they will hand the jackets over.
RELATED TOPICS