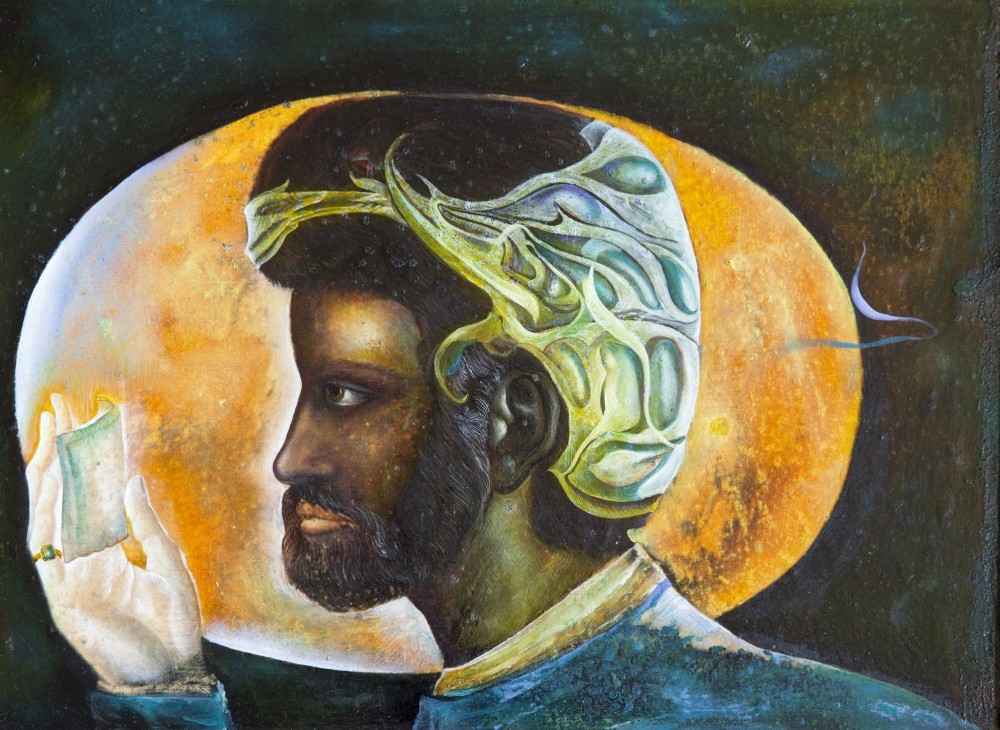 Accomplished Turkish painter Erol Deneç, who is known for his ‘fantastic realizm,' has recently opened an exhibition at İş Sanat Kibele Gallery to run until Feb. 18 with his surrealist works

Seeing the painting as "a song of existence," Erol Deneç said all of his efforts are about carrying his art, personality and works to future generations. Deneç argues that the works reveal the mood of the artist, and that the painting must be perceived in its deep and multilayered dimension. "Painting, let's say art in every way, reflects the spiritual world of the artist with the colors, form, music sounds and words of the soul. Art is incomprehensible because it is not done with reason. People with similar frequencies find echoes in their own extracts." 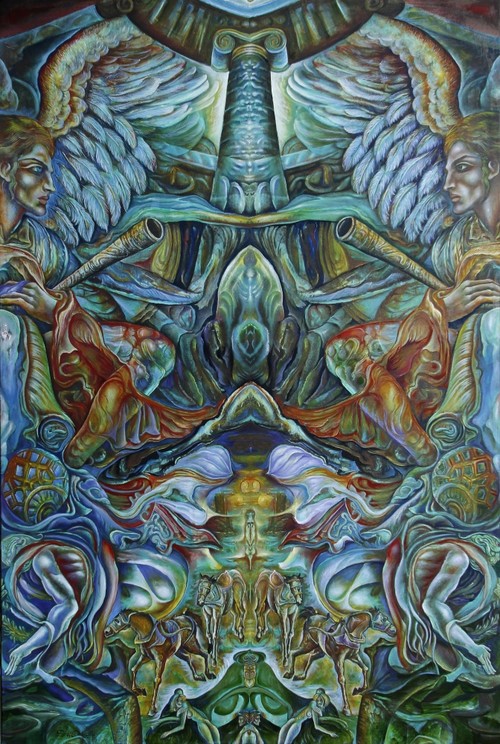 "Angels Waiting to Blow the Trumpet"

Commenting on his accumulation of knowledge, Deneç continues his art by blending his talent with his imagination, quoting Leonardo da Vinci words: "Art is talent plus imagination." Deneç suggests that art should be oriented towards the future by addressing the present without breaking away from the past.

Interested in painting since childhood, Erol Deneç describes his first encounter with paints, saying: "I was about 3 years old. One day we visited one of our neighbors in the neighborhood. My father had bought colored pencils in a small package for his little girl who just started school. [He brought] a package of seven colors. When I saw those colored pencils, I realized what could be done with them. I cannot describe how I felt inside. It was like falling in love with someone at first sight."

Deneç, who pursues his art as an independent spirit away from commercial concerns, puts his own free will forward and thinks that surrealism is a way of life and a new model of perception rather than a mere art movement. 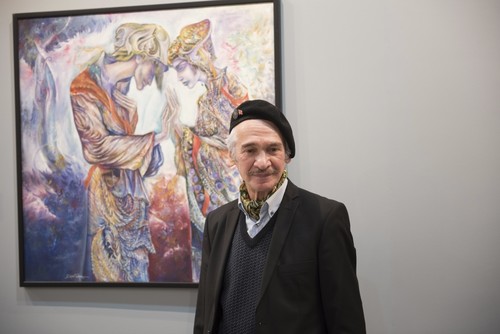 Deneç, who pursues his art as an independent spirit away from commercial concerns, puts his own free will forward and thinks that surrealism is a way of life and a new model of perception rather than a mere art movement. He believes that the works reveal the mood of the artist, and that the painting must be perceived in its deep and multilayered dimension.

The artist was invited to Vienna in 1964 by Professor Ernst Fuchs, one of the world's most famous fantastic realist painters, after the Fuchs saw one of his designs, and Deneç then spent 24 years in Vienna, to which he traveled only with some money and a train ticket. The exhibitions he opened were highly praised by art circles. "Human beings become adolescents in the soul as they become adolescents in the body. They question themselves by asking who am I, where did I come from, where am I going, and what is my purpose between this departure and arrival, and start their own journey," Deneç said, adding that he has always had a will to discover and believed that art lives and matures with the artist. Deneç designs his works as a special creation that refines the human soul, deepens the human mind and strengthens the intuitions.

The works of painter Deneç, who has opened more than 150 exhibitions across the world's leading art critics throughout his art journey spanning over half a century, can be visited at İş Sanat Kibele Gallery until Feb. 18.

Born in Istanbul's Kadırga district in 1941, Deneç continued his education at Printing Vocational School after studying at Kadırga Elementary School and Gedikpaşa Secondary School. In this period, he started to take an interest in music and learned to play the violin and the oud. After completing his high school education, he enrolled at the Applied Fine Arts Academy.

In 1962, he initially worked with guest lecturer Anton Lehmden at the academy and became the first Turkish representative of fantastic realism.

In 1964, he settled in Vienna with the invitation of Ernst Fuchs, one of the founders of the Vienna School of Fantastic Realism, and opened his first exhibitions. His works won him the Meister Prize by the Vienna Academy of Fine Arts between 1965 and 1969.

The artist, who lived on the outskirts of the Alps with his wife and children for a while, continued to study Classical Turkish Music with the violin and the oud as well as Indian music and sitar.

After returning to Turkey in 1989, the artist worked as an art teacher between 1991 and 1995. He founded the Istanbul Fantastic Reality group with his students from the Istanbul University Congress and Culture Center.

His works are included in the Vienna City Collection, and the Albertina and Belvedere museums in Vienna as well as some special collections in Germany, Austria, France, Italy and Turkey.
RELATED TOPICS