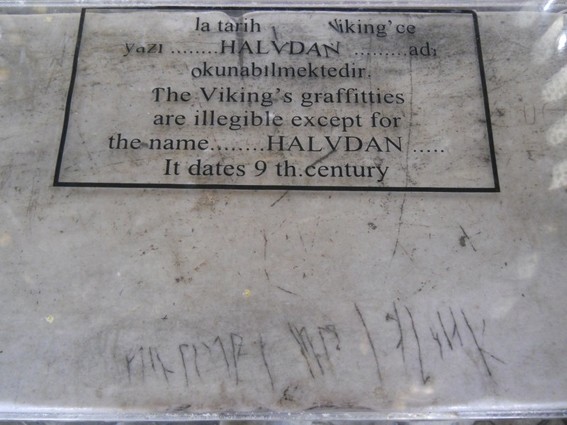 A ring that was found in a grave in Sweden has raised questions about the link between Vikings and the Islamic world as it is inscripted with the carving of the word ‘Allah' in Arabic letters. The ring might have come from Andalusia or Baghdad, while Istanbul is also a possibility as it was a vivid transit center in the era

Istanbul has accommodated several peoples, speaking different languages and practicing different cultures. Until it was conquered by the Ottomans in 1453, Greek-speaking Byzantines ruled the city where the Genoese, Arabs and Armenians lived together as well. However, this city, which offers opportunity to observe traces of several empires and cultures, is full of surprises: One can see an Ottoman mosque built on ancient Greek stones or one may learn about a Viking neighborhood in Istanbul's Beşiktaş district after reading this piece.

An article, "One Ring to Bind Them," in the Archaeology journal, published by the Archaeological Institute of America, says a ring was found in Sweden in a Viking-era woman's grave. What makes this ring different was that the word "Allah," (God in Arabic) was inscribed on it. The article says that examinations show the ring dates back to the ninth century. It might have been taken either from the Arabs of Andalusia, which was established in the eighth century in Spain, or from the Arabs of Baghdad. The second probability explains why Vikings settled in Istanbul.

Scandinavians carried out raids in Europe, the Mediterranean and even the Caspian Sea from the sixth to the 12th century. The raids, starting as piracy and looting, but turned into trade after the Vikings established business ties with the Islamic world. Although all of them are called Vikings, Scandinavians who raided the West were called Viking while others, attacking the East, were called Varang according to Greek documents. The word Varang, used by the Greeks, derived from the ancient Norse language. The Varangs, or the more well known, Vikings, first established princedoms in Novgorod and Kiev, then reached the Caspian Sea through the Volga River and started doing business with Baghdad. After going beyond the Black Sea, the Vikings started raiding Byzantium. Sources say that Byzantines and Vikings first met in 839. From then on, the Vikings continued raiding areas around Istanbul.

While the Byzantine Empire was troubled by Muslim armies in Anatolia, the Vikings surrounded Istanbul in 860. The defenseless city could not resist the barbaric attacks, and as a result, a time of horror started for the city's residents. Ecumenical Patriarch Photius I called the Vikings the "unknown nation." Yet, the Byzantines became familiar with this people as their raids on Miklegard, their name for Istanbul (meaning the great city), did not stop until the 10th century. Despite the raids and bloody clashes, trade also made remarkable progress. Archives from these centuries teach researchers that an agreement dating back to 907 was made between the Byzantine Empire and Kiev-based Viking Prince Oleg. According to the agreement, a neighborhood would be given to Viking mercenaries to maintain their business relations.

Moreover, the Vikings were granted the right to enter the city center on the condition that they left their arms in the given neighborhood known as Aya Mamas, now Beşiktaş. Relations changed over the course of time. Due to their fame in war, the Vikings, called Varangians in Byzantine manuscripts, became the paid guards of the Byzantine emperor until the conquest. The guardsmen participated in fights on the frontlines of the empire. They also helped repair Hagia Sophia, which has Viking script on one wall, saying, "Halvdan was here."

As a result of settling in Istanbul, the Vikings caused interaction between Scandinavians and the peoples of the East. While they introduced Byzantine architecture and icon-making art to Russia, they also carried Muslim goods to their homelands. Thus, the aforementioned ring might have been transported by a Viking who resided in Istanbul after returning from Baghdad.
RELATED TOPICS