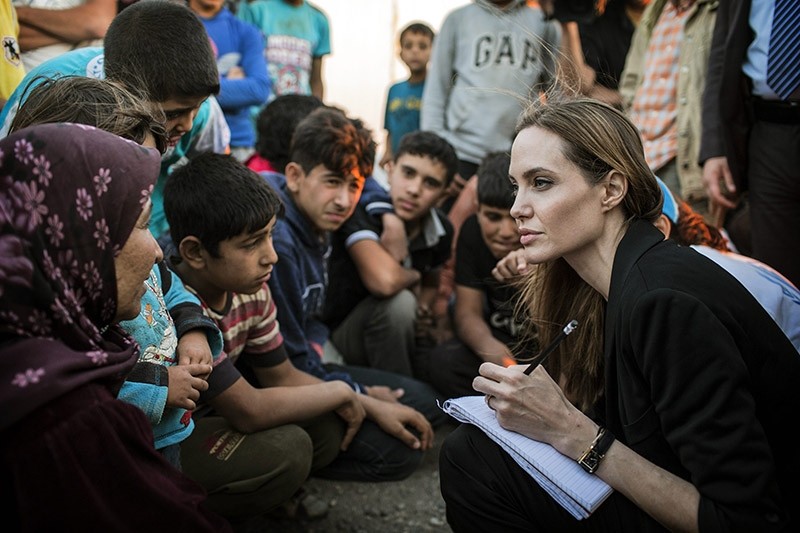 This June 18, 2013 photo shows special envoy Angelina Jolie taking notes as she speaks with Syrian refugees in a Jordanian military camp based near the Syria-Jordan border. (AP Photo)
by Daily Sabah Feb 16, 2017 12:00 am

Shooting for the trailer of a new Turkish series called "Hayat Köprüsü" (Bridge of Life), which will feature international stars like actress Angelina Jolie and football player Cristiano Ronaldo, wrapped up in Turkey's southern Gaziantep province.

The series is planned to last for three seasons, and will tell the story of a Syrian family seeking refuge in Turkey, after fleeing their war-torn country.

Director Eyüp Dirlik said that the project was launched with the slogan "Either you stay there and die, or you come here and live". Dirlik also gave information about the casting, stating that international celebrities would visit Turkey's Gaziantep to support the project.

The director announced that his crew was in contact with some international relief agencies, adding that Ronaldo and Jolie were among the big celebrities who wanted to contribute to the project.

The new series is expected to become an international project after the trailer reaches wide audiences and particularly considering the production's existing contacts with countries across the Middle East.

Gaziantep Metropolitan Municipality Mayor Fatma Şahin said that the series' plot was gripping, as it would include love, drama, family ties and the struggle for life.

Leading actress Perihan Savaş announced that the actual filming of the series would start this March in Gaziantep.

Expressing her excitement about the new project, Savaş stated that the series could also be seen as a lesson for humanity, telling the lives of Syrian refugees in Gaziantep and the city's hospitality.