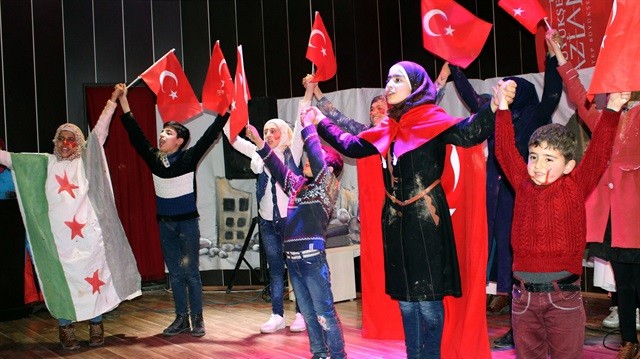 u201cThank you Turkeyu201d is a project of a childrenu2019s theater class, between ages 8-15, at the Ensar community center in Gaziantep, a city that has a high population of Syrian refugees.
by Anadolu Agency Mar 15, 2017 12:00 am
In a community center in southern Turkey, around 30 Syrian children are preparing a play that expresses their gratitude for having been rescued from the war in their home country.

"Thank you Turkey" is the project of a theater class of children, ages 8-15, at the Ensar community center in Gaziantep, a city that has a high proportion of Syrian refugees.

The production, which began rehearsing in January, also examines some of the children's experiences during the war.

"The children replayed what they have been through," Salih Açıkgöz, the principal of the center, told Anadolu Agency. "Children and women are the ones who can explain the war in the best way. In the play we show this."

The center plans to showcase the play at several events in the coming months. "These children are very talented," Açıkgöz said. "We just brought it out."

Yahya Dede, the play's Syrian director and a member of staff at the center, said the creation of the play had been a "hard process" for those involved because of the emotions it stirred.

"Many relatives of these children have lost their lives in air attacks, just as we show in the play," Dede said.

However, it also showed the other side of human nature, as Turkey opened its doors to Syrian refugees. "Children who grew up with cruelty are now growing up here with love," Dede said.

One of the actors, Ule Naif, 14, described living in fear when he was still in Syria.

"The planes came when we were unaware of anything and everyone turned their backs on us," he said. "While playing in this theater, I remembered the beauties Turkey gave us."

Sidro Keyto, 12, said the theater group wanted to take their play further afield. "If we have the chance, we want to stage it everywhere," he told Anadolu Agency. Turkey is home to more than three million refugees, the vast majority from Syria, and Gaziantep's population is now around one-fifth Syrian.
RELATED TOPICS