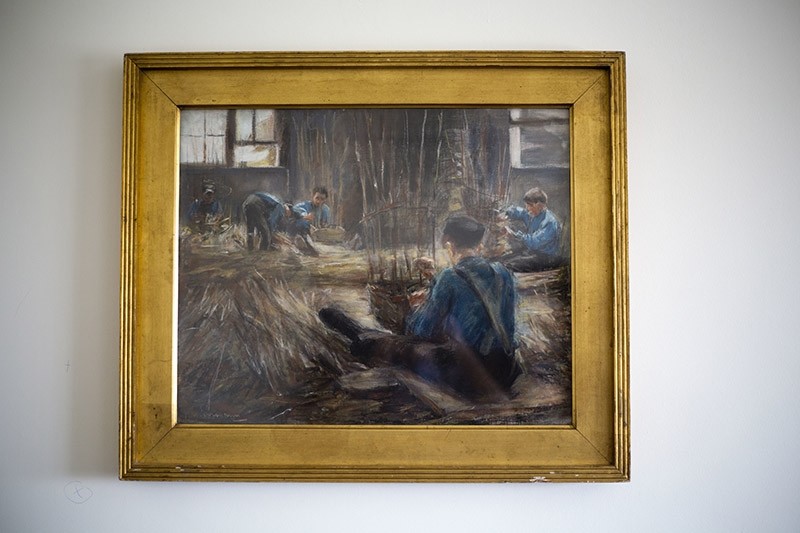 Against an empty white wall in a nondescript Jerusalem law office hangs an impressionist work of art that encapsulates 80 years of tragedy, conflict, mystery and redemption.

Max Liebermann's "Basket Weavers" is set to return to the American heirs of its original Jewish owner after it was confiscated by the Nazis, jockeyed by an unscrupulous German art trader, and ultimately purchased by an Israeli Holocaust survivor unaware of its murky past.

Following an emotional negotiation, the valuable canvas is now being sent to the United States in what the attorney who brokered the deal called a fitting conclusion to a saga that pitted two Holocaust survivors against one another — and exposed one of the lingering wounds of the German campaign to annihilate Europe's Jews and steal their belongings.

Meir Heller, the Jerusalem lawyer whose Israeli client insists on maintaining his anonymity, said both were relieved to have finally closed this historic circle.

"This was not a legal case that I wanted to win because it would not be a victory for either of the sides or for the interests of the Jewish people," he said. "I'm glad that we have come to an agreement with all the emotions and all the baggage involved."

Washington-based attorney Peter Toren said his 91-year-old father David was eager to receive the painting but called it "at best bittersweet" since he has gone blind and would not be able to enjoy its beauty.

"He's of mixed emotions because he still harbors, understandably, a lot of resentment and anger toward the Germans," he said. "A painting certainly can't make up for that."

The tale began in 1939, when the wealthy Jewish industrialist and art collector David Friedmann was forced to flee and the Nazis pillaged the vast collection he left behind. Many of the works ended up in the hands of Hildebrand Gurlitt, a notorious German art dealer who traded in what the Nazis called "degenerate art" — works deemed inferior because they were un-German, Jewish or Communist or, as is the case with impressionist and other modernist works, did not employ traditionally realistic forms — but were pleased to sell to help fund their war machine.

Much of Gurlitt's collection remained unseen for decades and experts feared they had been lost or destroyed. But in a shocking discovery, a vast horde resurfaced in 2012 when German authorities raided a Munich apartment belonging to his son Cornelius while investigating him for tax evasion.

Paintings by artists including Claude Monet, Pierre-Auguste Renoir and Henri Matisse were discovered. Cornelius Gurlitt said he had inherited much of the art from his father.

The reclusive Cornelius Gurlitt kept more than 1,200 works in his Munich apartment and 250 more in Salzburg, Austria. The discovery brought renewed attention to the many unresolved cases of looted art that was never returned to original Jewish owners or their descendants.

"When there is a plan for genocide then it is OK to steal and pillage. There was a complete disregard for any individual rights," said Yehudit Shendar, a retired deputy director of the Yad Vashem Holocaust museum in Jerusalem and an expert on the Gurlitt art cache. "The whole issue of the theft of art is directly related to that fact that its owners were destined for destruction."

She said the nearly 1,500 Gurlitt items, valued at 1.3 billion euros ($1.39 billion), represented only a fraction of the looted art. Cornelius Gurlitt died in 2014 at age 81, designating Switzerland's Kunstmuseum Bern as his sole heir.

As in many restitution cases, though, the heirs' demands for the return of looted art led to conflicts with the current owners. Germany even created a special body, known as the Limbach Commission, to mediate ownership disputes.

Because of this complex process of determining ownership, and because so few direct descendants of victims remain to claim their property, only five pieces of the Gurlitt cache have thus far been returned to the descendants of their Jewish owners.

One of those was Liebermann's "Two Riders on the Beach," which went to Friedmann's great nephew — David Toren of New York City, who along with his brother were the only family members to survive the Holocaust. He later sold the painting for $2.5 million.

The recovery led Toren to seek out another Liebermann painting he recalled featuring five Dutch looking boys weaving baskets out of straw. The sleuthing led him to believe that "Basket Weavers" had made its way to Israel and he made a public plea to have it returned.

Word reached an Israeli man who had resisted the Nazis during World War II and had donated generously to fellow survivors since then. To his horror, the man learned that the painting he had purchased at a Berlin auction in 2000 for 130,000 euros ($139,000) was the one Nazis looted from Friedman.

That's when the Israeli man approached Heller about returning the painting to its rightful owners.

"This caused him great turmoil," Heller said. "It retroactively sullied the artwork. He couldn't even look at it anymore."

The case hit a surprising hitch last year when the Israeli contacted Peter Toren, and was deeply offended by insinuations that he had in fact known of the picture's origins. Heller said his client refused to return the painting until he received an apology.

A compromise was reached: An apology would be made, Heller's client would be compensated and the proceeds would be donated to aid needy survivors.

Peter Toren said he is currently focused on suing the German government for the return of 52 additional paintings he says were looted, based on a detailed inventory he acquired that was compiled by a Nazi art expert in 1942.

In the meantime, he says he is looking forward to seeing the Liebermann painting hanging once again on his family's walls.

"Having something tangible that when you look at it and think about it once being in the possession of my family and the history of it — it is very special," he said.