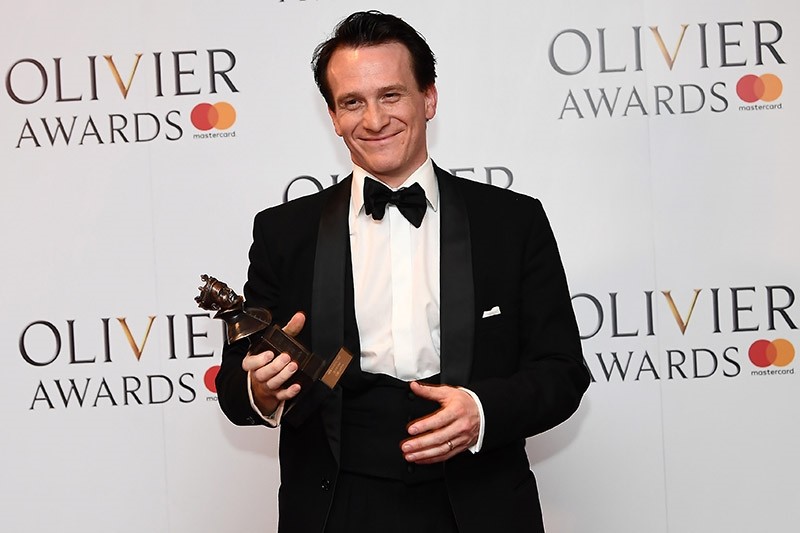 Jamie Parker, winner of the Best Actor award for his role in 'Harry Potter And The Cursed Child' poses with his award during the 2017 Laurence Olivier Awards in London on April 9, 2017. (AFP Photo)
by Associated Press
Apr 10, 2017 12:00 am

J.K. Rowling's boy wizard bewitched the page and the screen, and stage sequel "Harry Potter and the Cursed Child" cast its spell at British theater's Olivier Awards on Sunday.

The plot for the Harry Potter play picks up 19 years from where Rowling's last novel left off. It depicts Harry and his friends as adults and follows the adventures of their offspring at Hogwarts School of Witchcraft and Wizardry.

Written by Jack Thorne from a story co-written by Rowling, it has been a critical hit and box-office behemoth since opening in July at London's Palace Theatre, and plans are afoot to send it to Broadway next year.

But star Jamie Parker, who won the best-actor prize for playing the adult Harry, said success — and the embrace of Potter fans — had not been a foregone conclusion.

"There was so much potential for cynicism and skepticism surrounding a production which could have been very tightly controlled and industrial and commercially minded," Parker said.

But talent, hard work and oodles of stage magic prevailed.

"I'm just so pleased and proud that the entire team are being celebrated," Parker said backstage during the ceremony at London's Royal Albert Hall.

Swaziland-born Dumezweni said she was honored to play Hermione, one of Rowling's most beloved characters. Some had questioned the casting of a black actress in the role, played onscreen by Emma Watson — though Rowling pointed out that Hermione's race is never specified in the books.

The play has drawn thousands of first-time theatergoers to the West End, and Thorne said he hoped it would be "like a gateway drug that will get people involved in theater."

In other categories, Billie Piper was named best actress for playing a woman whose desire for a baby leads to tragedy in "Yerma" at the tiny Young Vic. The play, adapted by Simon Stone from a Federico Garcia Lorca drama, was named best revival.

"Groundhog Day," which began life at London's Old Vic and is now previewing on Broadway, was named best new musical. The show by Tim Minchin and Danny Rubin wittily reworks the much-loved 1993 movie about a cynical weatherman doomed to repeat the same day over and over again.

Andy Karl was named best actor in a musical for his performance in the lead role, made famous onscreen by Bill Murray.

Composer Andrew Lloyd-Webber saw two of his musicals take awards. The child rockers of "School of Rock The Musical" won the prize for outstanding achievement in music, while an open-air production of "Jesus Christ Superstar" in London's Regent's Park was named best musical revival.

Actor-director Kenneth Branagh received a special award for his contribution to theater during the black-tie ceremony.

Named for the late British actor Laurence Olivier, the prizes honor achievements in London theater, musicals, dance and opera. Winners in most categories are chosen by a panel of stage professionals and theatergoers.

The Oliviers have become an increasingly glitzy affair in recent years, awarded at a ceremony studded with musical numbers. Sunday's event had the added boost of radiant sunshine for a positively summery red carpet.