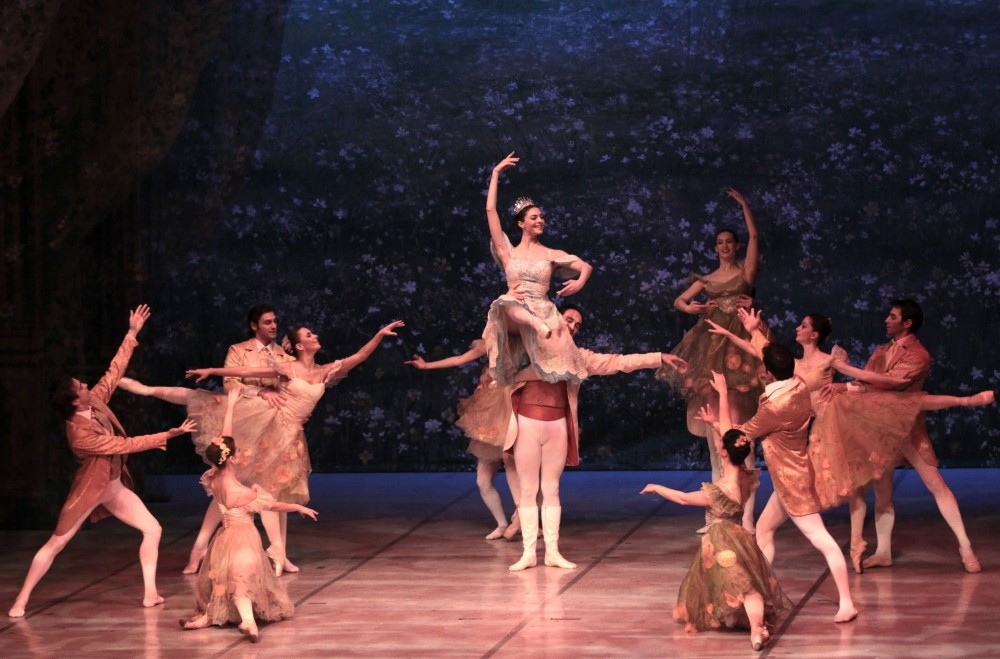 The ,Nutcracker, ballet performed by the Samsun State Opera and Ballet.
by Anadolu Agency Jun 15, 2017 12:00 am

In recent years, public interest in opera and ballet has increased considerably, while, at the same time, professional ballet dancers are much more widely recruited by state operas and more courses are being opened for the younger generations

The interest in opera and ballet is increasing all over the country, and after Istanbul, İzmir, Mersin and Antalya, the 6th State Opera and Ballet was opened nine years ago in Samsun. The General Manager of the State Opera and Ballet, Selman Ada, has noted that Turkey produces many great male ballet dancers of note, with some having won gold medals, and others who currently dance at world-renowned dance centers.

Speaking to Anadolu Agency (AA), the manager said the number of operas and ballet dancers are increasing, so there is now more need for artists, and that they are training artists for the opera and ballet through private courses given in cooperation with education institutions.

Ada stated that they formerly had a hard time hiring male ballet dancers for the opera and ballet, and they were meeting this requirement with foreign ballet dancers. However, with the boom in interest in dance in the last few years, Turkey has been producing very successful ballet dancers.

"Now, families from all layers of the society and cultures want to enroll their children to ballet courses, whereas in the past the opportunities were very limited. Now the State Opera and Ballet operates in six cities. Courses in all the cities are quite affordable. When it comes to ballet, we have some of the best dancers in the world, some of whom have gold medals, and they keep on receiving more awards, prizes and titles. Most of the ballet dancers live in metropolitan areas like Ankara, Istanbul and İzmir and dance at renowned dancing halls in the world."

Highlighting that dance is as old as the history of humanity, Ada said one of the main criteria of being a human is being able to move to the rhythm of music, and this art which started in the ancient times still continues today.

Today, moving gracefully to music has become a type of art on its own, after having evolved over hundreds of thousands of years into what we call as opera and ballet today according to Ada. He also mentioned that there are no strict criteria for becoming a ballerina or a ballet, it's all about taming your body. The art form is even better than sports since you have to be in harmony with music.

"Even though they've included music in some sports branches, what we do is based completely based on music's rhythm so all our moves have to be synchronized with music. This really trains one's body as you have to fit your moves within the tune. Ours is one of the greatest forms of art," said Ada.

Ankara State Opera and Ballet artist Kuzey Kıyıcan (33) noted that he has been involved in ballet for the past 23 years. He received a scholarship from Kirov Academy 17 years ago, and after his three-year education, he was invited to the Universal Ballet Company in Seoul in South Korea, where he danced for six years, mostly practicing classical and neo-classical dances. He said that he has made it to the finals of a young ballet dancers competition in the U.S. in 2002 and returned back to Turkey in 2009. Since then he has been working with the Ankara State Opera and Ballet. The dancer emphasized that Turks have always had talented dancers in each generation, and that today, there are many who have represented Turkey at international contests. "I believe there are now more families trying to get their children interested in ballet and encourage them to carry on with their training once they realize how one's walk changes after even a little bit of training," said Kıyıcan. He also said that dancers can become professional ballet dancers and ballerinas by trying to get into conservatories.

Head choreographer of the Samsun State Opera and Ballet, CankatÖzer (36) started his training in 1992 at the Dokuz Eylül State Conservatory. He transferred to Hacettepe University's State Conservatory in 1998 and then started his professional dance life in 2000 at the State Opera and Ballet. Even though he became its principal dancer in 2003, due to injuries and operations, he had to cease his active dance life and become a trainer. Stating that he has attended about 1,200 performances at galas and festivals both in Turkey and abroad, and received awards while representing Turkey,Özer added that ballet has undergone a major transformation within the last decade, some of which is owed to the success and popularity of famous male ballet dancer Tan Sağtürk's ballet school. "There's a great improvement; especially in terms of the number of staff. We can see the increase in the number of courses opened by the Ministry of National Education and some courses that are opened by esteemed international institutions. We need more promotion and more investment so we can have more dancers and then create better productions and projects," said Özer, who noted that he was very pleased to follow in his father's footsteps in the profession.

According to 2016 data from the Turkish Statistical Institute that was announced on June 1, ballerinas now constitute 44.9 percent of the number of artists working for the Opera and Ballet General Directorate. In the 2015-2015 season 2,444 artists, including guest artists, performed for the State Opera and Ballet. In orchestras, choruses and groups under General Directorate of Fine Arts, 1,424 artists worked in the 2015-2016 season; out of which 392 were employed by orchestras, 665 by choruses and 367 by groups.