A Turkish literary journal has brought out a special issue on Africa that aims to celebrate the continent's diverse culture and rich history.

The issue of the Ankara-based monthly magazine HECE is titled "Africa: Beyond 500 years of colonialism and conflicts," and is now available in several cities of Turkey, featuring over 50 articles by leading African experts and scholars from around the world. 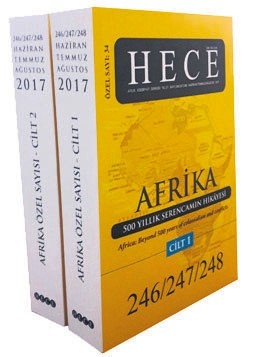 The 1,176-page journal is divided into two volumes. Some articles appear side-by-side in English along with their Turkish translations in the literary magazine, which has been in circulation since 1996.

"The main objective of the issue is to allow Africa speak for herself instead of telling stories and experiences about the continent that make no sense," Ahmet Sait Akçay, editor of the special Africa issue, said in an interview.

Akçay, who is also an employee of Anadolu Agency (AA), also spoke about the tainted lens through which Africa continues to be viewed globally.

"Africa has never been presented as an actor in a scene without its cultures being distorted first. The only way to make sense of Africa is by truly understanding its belief systems, concepts on morality, and social and cultural patterns of blacks rather than approaching it through preconceived notions.

"There is not just one Africa, but many Africas that we should be talking about," he said.

About the current narrative on the continent, he said: "Africa is being promoted only through famine and poverty nowadays. This narrative remains almost unchallenged. This is really a shame.

"Actually, associating the Dark Continent with such reductionist views serve the same purpose as racism did for centuries."He said the special issue aims to change such mindsets and presents a truer picture of Africa.