Based at a historic building, once known as the Lodge of Uzbeks, Istanbul Design Center has been a meeting place for art lovers and students since 2008

One of Istanbul's most prominent art institutions in recent times, the Istanbul Design Center is housed in the city's Kadırga district in a historic building that was once known as the Uzbek lodge. Restored, the building now serves as an arts hub, with different workshops and seminars given by local and foreign artists and experts.

The Design Center aims to combine national art and design with modern innovations, very much unlike known stereotypes and clichés. It describes the crescent on its logo as the symbol of Turkish and Islamic culture of arts and design. The dove resting on the crescent, on the other hand, represents Turkish designers broadening their horizon atop Turkish and Islamic culture.

Apart from its national and Islamic focus, Istanbul Design Center also arranges seminars and workshops on international themes. No matter how the center takes a national approach in describing itself, it offers a multicultural and multilingual environment for arts, thanks to the presence of foreign artists and masters at the center, attending international seminars and workshops.

It organizes a wide range of program on architectural, industrial, production, visual communication, jewelry & accessory and fashion design. Istanbul Design Center plans to offer the following workshops, exhibitions, and panels in the next term –

5 Designs in 5 Days for children

This program for beginners will focus on techniques and methods rather than stereotyped patterns. Once completed, participants will be capable of creating their own unique designs.

Taking Central Asian methods as the basis, much of the program will focus on pattern analysis in the parchments at the Topkapı Palace, Mirza Akbar Khan, and Tashkent.

With a syllabus second to none, the program is an opportunity to learn the theory and methodology professor Miroslaw Majewski has developed through years of research and work with Iranian and Uzbek scientists.

The five-day program will be concluded with an exhibition featuring the students' works. Technical visits to various spots in Istanbul's Suriçi neighborhood (the old city within the city walls) will also be held as part of the program. 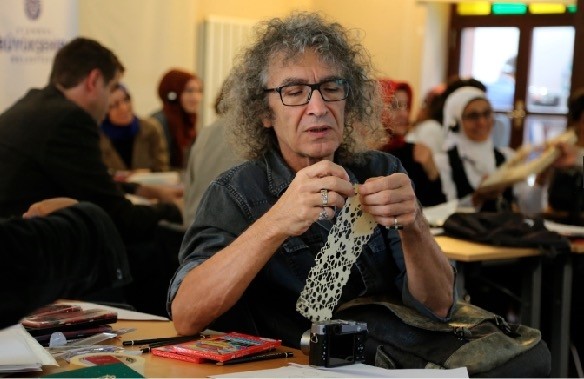 As part of its summer program, the center is offering the following workshops.

Istanbul Design Center is calling for applications for a design workshop on the Islamic art of Illumination with artist Şeyma Çınar. The program will start on Aug. 4. It will offer a conceptual education in the field.

With Fatmanur Bayraktar as the trainer, this workshop offers education on making wax patterns, metal clay and enameling techniques under three different classes.

5 Designs in 5 Days, for children

Still accepting applications, the program will be held on Sept. 11-15. Organized for children between the age of 8 and 14, the five-day program consists of five workshops under the categories of ceramic, authentic illumination, geometric patterns, short film, and painting.

The Lodge of Uzbeks

Dating back to the 17th century, The Lodge of Uzbeks (also known as Bukhara Lodge) is located between Istanbul's Sultanahmet and Kadırga districts. Neighbor to Sokollu Mehmed Pasha Mosque, the structure catches the eyes with its extraordinary architecture.

Serving as an accommodation center for traveling dervishes, who were members of Naqshbandi Tariqa, and pilgrims from Turkistan, the lodge, first underwent restoration in 1887, during the reign of Abdul Hamid II.

Following its second restoration, undertaken this time by Istanbul Metropolitan Municipality between 2006 and 2008, the building was assigned to Istanbul Design Center.