With Qatar in crisis, ‘Tamim the Glorious' rises as national emblem 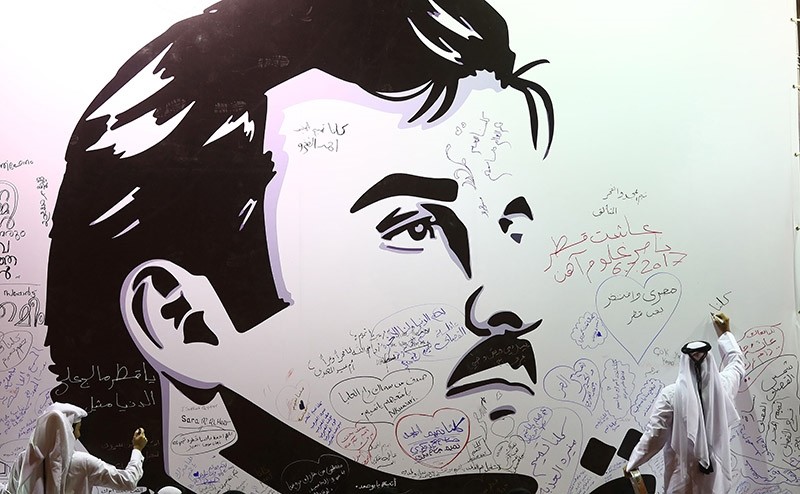 This file photo taken on July 6, 2017 in the Qatari capital Doha shows a man writing comments on a wall bearing portrait of Emir Sheikh Tamim bin Hamad Al Thani, which became symbol of resistance during the month-long Gulf crisis. (AFP Photo)
by Aug 05, 2017 12:00 am

As Qatar finds itself at the center of a diplomatic storm, a young artist has shot to stardom with a sketch of the emir, who is now the emblem of Qatari nationalism.

In the capital Doha, Qatari Emir Sheikh Tamim bin Hamad al-Thani's face is everywhere, thanks to a silhouette of the ruler's profile and the slogan "Tamim al-majd," Arabic for "Tamim the Glorious," on bumpers, shop windows, concrete walls and mobile phone cases.

"I have no words to describe what I feel when I see my illustration everywhere," says Ahmed al-Maadheed, who created his design hours after Saudi Arabia, the United Arab Emirates, Bahrain and Egypt cut ties with Qatar on June 5 for its alleged support for Islamist extremism and ties to Iran. Qatar has denied the allegations.

"It's a gift from God to have the honor to draw his majesty's portrait and have it become a symbol", Maadheed told Agence France-Presse (AFP) in Doha.

Maadheed posted a portrait of the emir, sketched hastily in black and white immediately after Saudi Arabia and its allies announced the sanctions against Qatar, to his personal Twitter and Instagram accounts.

The emir's profile, and the line "Tamim the Glorious" in intricate Arabic calligraphy, spread like wildfire in Qatar after a retweet by the emir's brother, finding its way into the streets as posters, stickers, flags and even jewelry.

The design also resurfaced as a graffiti stencil, frequently painted in black and accompanied by the red-and-white Qatari flag.

The success of "Tamim the Glorious" propelled the then-unknown artist into the limelight overnight, and by the end of June he had exhibited his work at an annex of Qatar's art museum and one of Doha's top hotels. Nearly all the paintings sold that month.

Maadheed's paintings are frequently patriotic, featuring portraits of the royal family and even Turkish President Recep Tayyip Erdoğan – an ally of Tamim who has come to Qatar's aid with food supplies and military training in the Gulf crisis.

"I draw inspiration from my culture, from nature ... but also from well-known figures," Madheed said.

The emblem of the emir has since been translated into English for the country's sizeable expatriate community, who make up 80 percent of Qatar's 2.5 million population, and stickers and banners in English are now visible across the Qatari capital.

Madheed, who runs a small advertising agency by day, said he had been offered $10 million for the original Arabic design by a private party, but opted instead to give it as a gift to Tamim.

"I'm thankful God gave me the chance to create this sort of work that expresses my love for the emir," Maadheed said.