Metropolitan Orientalist in New York: Exhibiting Turkey at the Met 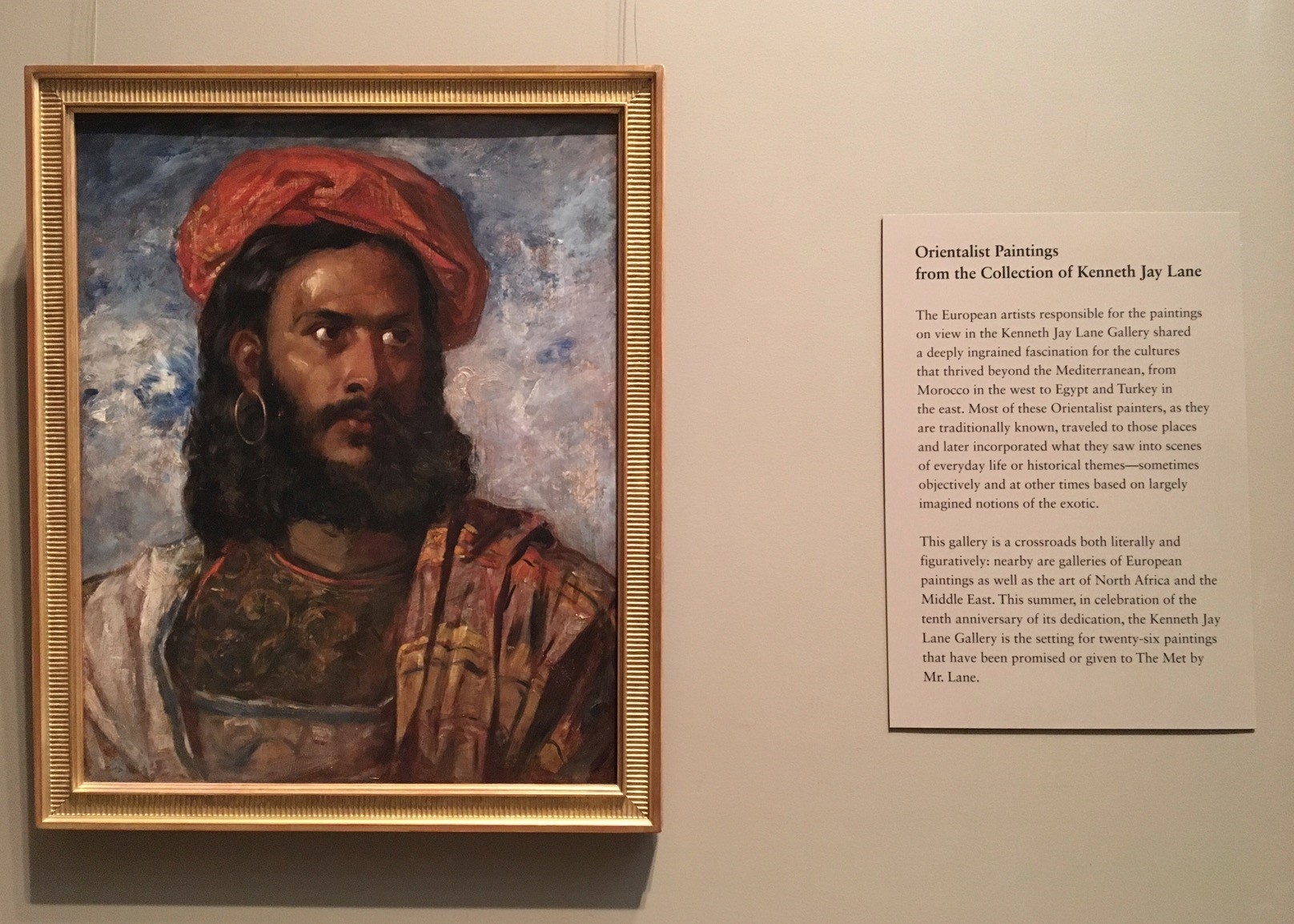 The 26 artworks from the Orientalist Paintings from the collection of Kenneth Jay Lane tell the history of the Metu2019s earliest acquisitions.
by Matt Hanson Sep 05, 2017 12:00 am

The first president of the Metropolitan Museum of Art in New York was a railroad executive and arts patron named John Taylor Johnston, born in Greenwich Village and educated in his ancestral Scotland. Among the 174 paintings that he purchased for the museum's inaugural collection in 1871 was "Bashi-Bazouk," an oil on canvas by Jean-Leon Gerome, currently on display at the Met's Orientalist Paintings from the Collection of Kenneth Jay Lane. The subject of the painting, inspired by a Turkish subject, has become an integral part of the museum. Home to over 2 million artworks in a gothic revival building that extends for nearly half a kilometer along the eastern perimeter of Central Park, the Met is the largest art museum in the U.S.

Early in 1868, the artist Jean-Leon Gerome returned to Paris with silk tunics and a military headdress that he had acquired during his 12 weeks in the Near East. In his studio located in Rue de Bruxelles, which stood atop his opulent house, stables and sculpture room, he fitted two models in the exotic clothing and went to work on a couple of oil paintings that he titled, "Bashi-Bazouk," which means "volunteering soldiers who were not registered in the regular army," named after the Ottoman mercenaries who were compensated solely in the spoils of war. Later that year, his worldwide fame preceded him as he was invited to the opening of the Suez Canal in Cairo with the most important French artists of the day.

In modern terms, the Orientalist typically depicts Turkey, Greece, the Middle East and North Africa. Considering that these areas are also former territories of the Ottoman Empire, it could be argued that Orientalist thought essentially illustrates the complexities of the European relationship with Ottoman lands, as depicted in painting, literature and even politics. While Orientalist motifs in art history can be observed as far back as the Renaissance and Baroque eras, the three years of French occupation in Egypt from 1798 to 1801 sparked unprecedented interest eastward, among the European elites who were privy to world affairs. 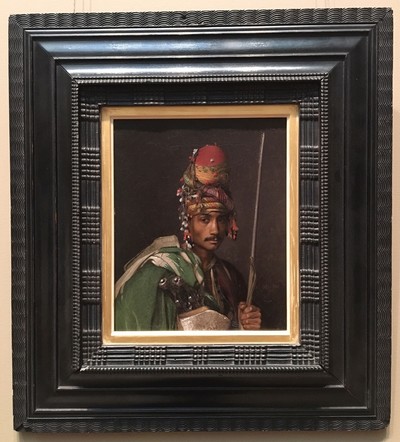 The Orientalist art of Gerome depicts the contrast between realism with romanticism, as his photographic paintings evoke bygone sociologies and extinct cultures that appear like a fantasy to the contemporary eye. "Bashi-Bazouk" is an example of aesthetic purity, as its heavily adorned models appear beautiful and picturesque, in Ottoman garb and entirely removed from the painful reality of unpaid soldiers who lived for blood money. For Gerome and his fellow Orientalist painters, the word "Easterner" meant "outsider." With his paintbrush, he sought to give a voice to the black sheep of Europe by traveling to Constantinople for the first time in 1853 after selling the "Age of Augustus" to the court of Napoleon III. From the slums around Constantinople and the Greek Muslims, Albanian dopers and prisoners to the assassins and slave holders of the imperial Turkish diaspora, Gerome exhibited the grit of being an honest witness in telling the story of foreign lands to the West, for the sake of his countrymen.

Amid the wave of Orientalist art that emerged during his time, Gerome succeeded earlier painters who never traveled to the lands of the Ottoman Empire, such as the Napoleonic propagandist Antoine Jean Gros. The works exhibited in the Orientalist Gallery at the Met are from the collection of the late jewelry designer Kenneth Jay Lane, who donated 26 paintings to the museum 10 years ago after having promised to give them as a gift. All of the pieces on display are by artists who actually visited Ottoman territories. 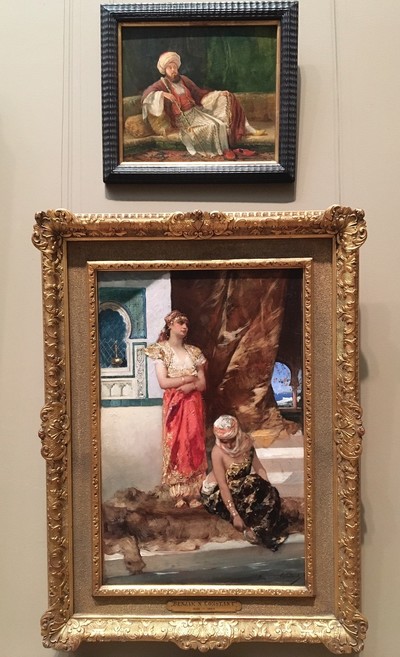 As the Greek War of Independence echoed the French Revolution, whose more conservative proponents moved to colonize Algeria for over a century to come, European artists meticulously followed the moral and political disintegration of Ottoman society. The most widely exhibited artist at the Orientalist gallery inside the Met is Jean-Joseph Benjamin-Constant, whose painting, "The Sultan's Tiger" exemplifies the intersection of revolutionary French thought with the traditionally slanted Western view of the Orient as a more primitive place, where rulers act like children who are more emotional than rational.

While Benjamin-Constant ventured to Morocco in 1872 early in his career, he was arguably nothing more than a romantic, Eurocentric Orientalist who drew inspiration from the 1827 poem, "The Pasha's Grief" by Victor Hugo for "The Sultan's Tiger," rather than actually bearing witness to the highest court in Constantinople. Its visual and literary metaphors emasculate and feminize Ottoman power as it tempts the imperial imagination of newly industrial Western Europe with a dreamy-eyed, moaning sultan who is easily defeated and subject to whim as he crawls to his dead African tiger.

He often painted scenes from the harem, the quintessential Orientalist theme, of course. Yet still, instead of whiling his way into one, he is said to have brushed oil onto wood and canvas with the verses of Hugo in hand. Unlike his contemporary Gerome, who apparently sought greater authenticity by enduring multiple travels in foreign Ottoman lands, Benjamin-Constant fell back on the Orientalist genre as a form of theater in painting, as seen in his piece, "The Serbian Concubine." The ladies of the harem are fashionably idle, or more accurately put, held captive, always baring their skin with loose-fitting, transparent clothing. In his "Afternoon in the Harem," the matchless turquoise beauty of the coastal country is in stark contrast with the opaque curtains of the forbidden private chamber. Among painters like Benjamin-Constant and his loyal patrons, the aesthetic motifs of the Orient merely served as a means for Europeans to express the unseen worlds of history and faith that were burned down with the ancient regime in the fires of industrialization and war after the revolution.

The British had an altogether unique approach to the Orientalist lifestyle and were even less objective. One interesting painting on exhibit from the collection of Kenneth Jay Lane is by an artist known simply as the "British painter." The anonymity of the creator and subject is fitting, as it points to a trend set by the Romantic poet Lord Byron, who immortalized himself with "Childe Harold's Pilgrimage," a book of verse partly inspired by a small city in northwestern Greece where he met the infamous autocrat Ali Pasha, the Lion of Janina.

Lord Byron posed for his painted portrait while wearing the Ottoman dress that he had purchased from an Albanian clothier on his travels. A hundred years later, Oscar Wilde did the same for a photograph. Between them, innumerable Englishmen broke loose from the industrial repressions of Western culture and wandered into Ottoman territory in search of the Orientalist dream, to travel amid the haunts of smoke and rumor that were illustrated in full, picture-perfect color on the canvases of fashionable European painters.