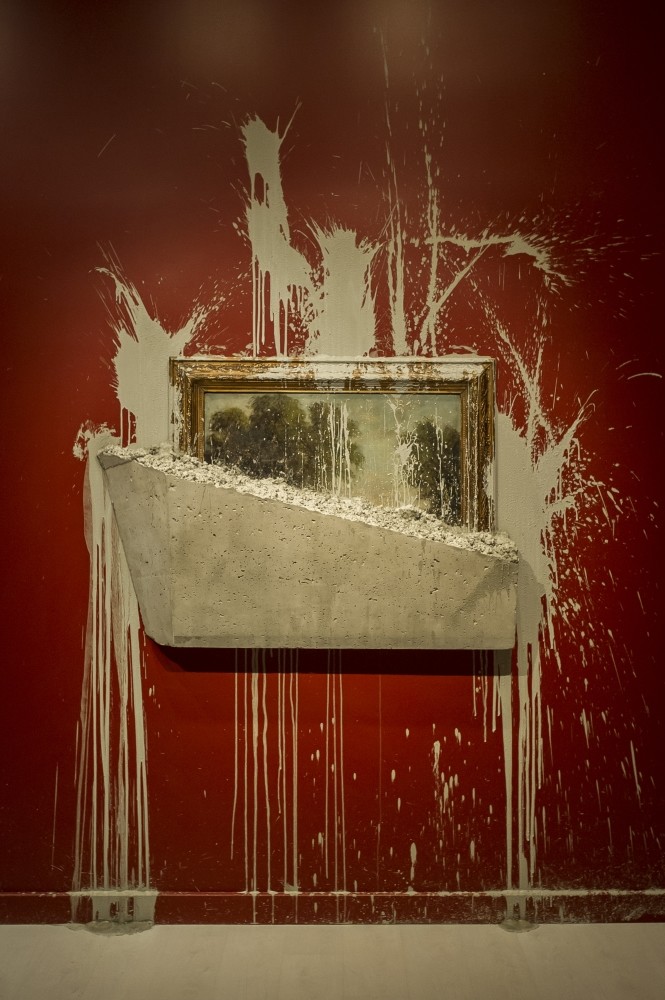 Sponsored by the Istanbul Foundation for Culture and Arts (IKSV), the 15th Istanbul Biennial titled "a good neighbor" will open its doors on Sept. 16.

The preparation for the biennial whose curators are the artist duo Elmgreen & Dragset is still ongoing.

In the biennial, there will be workplaces questioning the concepts of home, neighborhood and belonging by 56 artists from 32 countries within the theme, "a good neighbor."

The works by 30 artists among 56, which were produced for the biennial, can be seen for the first time in the biennial. The works will tell stories from different regions and eras.

The first surprise at the biennial is Pera Museum's sinking of a painting into concrete, by Mexican artist Alejandro Almanza Pereda.

While works by 15 artists are spread over three floors at Pera Museum, which is one of Istanbul's most prestigious exhibition spaces, the first of Alejandro Almanza Pereda's landscape paintings sunken into the concrete was situated in the permanent collection exhibition, titled "Intersecting Worlds," even before the biennial actually begins.

A work that was created with natural paints, whose owners aren't known and was found by a Mexican artist in Istanbul, was changed with a table in the permanent "Orientalist Painting Collection" of Pera Museum.

The other works by Pereda can be seen after the biennial is started.

The works are sequels to the artist's series "Spacephobia," which he has produced since 2010, aim to present an experience beyond visiting an exhibition by making the visitors think and question the classic art approach and human-nature relations.

Alejandro Almanza Pereda was born in 1977 in Mexico. He is living and working in New York and Mexico.

Almanza has lived in different regions of Mexico and the U.S. Having been affected by this situation, the artist started to deal with how different cultures perceive danger and risk.

He focuses on the concept of materiality by questioning objects physically and conceptually to create statues and underwater videos.

He held solo exhibitions in many institutions such as the San Francisco Art Institute, Museo El Eco in Mexico and Art in General in New York. His works were included in exhibitions held in ASU Muesum, Musei de Arte Moderno in Mexico, El Museo del Barrio in New York and Queens Museum.

You can follow the private interviews of Alejandro Almanza Pereda and other biennial artists during the preparations on the biennial's website.