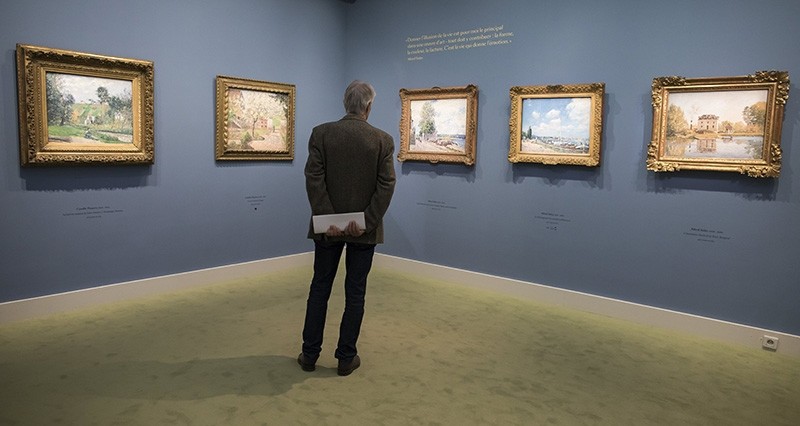 A visitor looks at paintings as part of the 'Secret Garden of the Hansens: The Ordrupgaard Collection' exhibition held at the Jacquemart-Andre museum in Paris (EPA Photo)
by Sep 14, 2017 12:00 am

The "secret" art collection amassed by Claude Monet, the father of impressionism, went on display for the first time in Paris on Thursday, 90 years after the great painter's death.

"I am selfish. My collection is for myself only... and for a few friends," the master once told journalists who called on him at his country home at Giverny in Normandy, whose remarkable gardens draw half a million visitors a year.

"We knew really very little about the collection," said Marianne Mathieu, one of the curators of the show at the Marmottan Monet Museum, which has brought together the bulk of the collection.

"Monet didn't speak about his private life and kept his art collection just as private," she added.

He kept the paintings upstairs in his private apartments at Giverny far from prying eyes, Mathieu said, and he didn't keep records of what he bought.

While the great and good came to visit him as he painted his famous water lilies, only a privileged few were allowed a peek at the canvasses he kept for himself.

An inventory was taken by experts when Monet died in 1926 but it was destroyed during World War II.

So Mathieu and her colleague Dominique Lobstein had to hunt down the 120 works, which included several by Manet and Boudin and more than 20 albums of prints by the Japanese artist Hokusai.

Monet began building his collection when he was still on the breadline with gifts from other painter friends like Renoir and Manet.

Even then his mania for privacy was evident. He was reluctant to sit for Manet with his wife and model Camille, and in the unfinished "The Painter Monet in His Studio" that Manet later gave him, his face is only sketched.

His beloved Camille died of TB in 1879 with her husband immortalizing her on her deathbed. Poignantly, Monet kept a Renoir picture of her with their son to his own dying day.

Mathieu said the artist was a "determined and secretive" collector who was not averse to digging in his heels, particularly when he traded works with his contemporaries.

When he lent Pissarro 15,000 francs to buy a house he demanded his acclaimed 1891 painting "Peasant Women Planting Stakes" in return.

But Pissarro's wife Julie -- to whom the painter had already gifted it -- would not let it go. A standoff ensued that Monet eventually won.

But the struggle was all the more surprising given that the painting was more in the Neo-Impressionist style of Seurat and Signac, whom Monet had pointedly refused to exhibit alongside, Mathieu told AFP.

"This shows there was a dichotomy between what he said publicly and what he collected," she said.

In fact, Monet kept four watercolors by Signac until his death.

Clearly, however, he was not overly fond of Degas, acquiring only one small pastel by the aristocratic artist who had cold shouldered him from his own enormous collection.

As soon as he had the cash, Monet began collecting work by his "masters" -- Delacroix, Boudin and Corot -- although he did not acknowledge their influence on his work until late in his life.

But from the 1890s onwards as he became rich and famous, Monet concentrated his efforts buying on Renoir and Cezanne, Mathieu added.

And tellingly, for the privacy of own rooms at Giverny, he bought a series of nudes from Renoir, a subject he never dared tackle himself.

Most of the works in the show, which runs until January 2018, come from the Marmottan Monet Museum's own vaults, which hold more Monets than any other gallery in the world.

But the curators also managed to persuade the Sao Paulo Museum of Art to lend them the first of the 12 Cezannes Monet acquired, including the rarely seen "The Negro Scipio," whose title grates on modern ears.