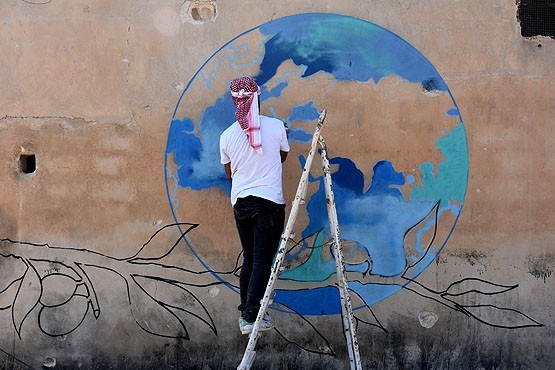 ,The world map above a bloody olive branch can best illustrate the tragedy in Syria,, says graffiti artist, Mr. Hure.
by Anadolu Agency Oct 02, 2017 12:00 am

A group of Turkish graffiti artists has created a number of anti-war murals in Bragitte, a small village in northwestern Syria's Azaz.

The village, retaken in the Turkey-led Operation Euphrates Shield, saw the artists use war-ravaged buildings as canvases.

Speaking to Anadolu Agency (AA), artist Mehmet Emin Türkmen said that he has been doing graffiti for almost two decades.

"I started doing graffiti when I was 13. I headed for Syria to show the rest of the world what happened here. But we did not expect to see such level of ravage and destruction in the region," Türkmen said.

"Pain and suffering loom over here while we live in rose-colored cities."

"Every inch of the region has suffered. What shook us the most was how children were massacred," Türkmen said adding that he represents children with flowers in his works and adds the sentence "you have cut the flowers here," to his murals.

Another graffiti artist, who goes by the nickname "Mr. Hure," said: "I have painted the world and an olive branch in my mural."

"The message I intend to give through this painting is that the people who are claiming to bring peace to the world, actually bring more suffering. The world is very different here. People are suffering while we live a comfortable life."

"The world map above a bloody olive branch can best illustrate the tragedy in Syria."

Yaşar Ebu Muhammed, one of the residents of the village, said that what has happened in the region must be narrated to the future generations.

"We witnessed the terror of Daesh and the regime here. The people did not leave despite all the risks," he said. Accusing both the Syrian regime and Daesh of destroying pieces of art in the region, Muhammed added: "The world and the bloody olive branch perfectly depict our tragedy. This painting says a lot."

The artists, who also painted on the walls in the city center, also added the name of Turkey's Humanitarian Relief Foundation (İHH) to their works.