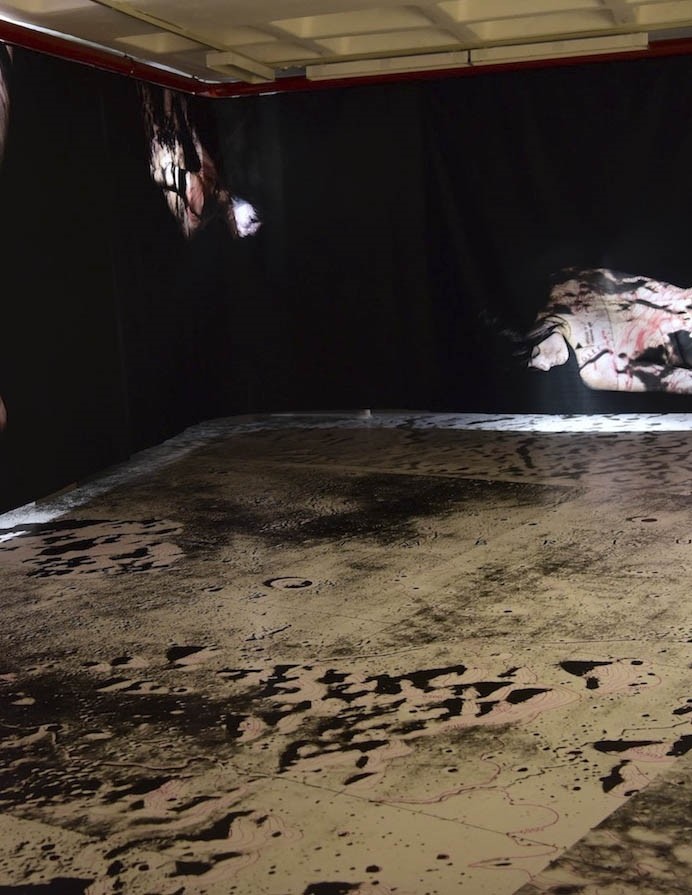 The entrance to Beybi Giz, a plaza in Istanbul's Maslak neighborhood, is often populated by chain-smoking office workers. Adjacent to their workplace, a culinary academy and a contemporary art gallery offer more cultivated pleasures. "This way to the moon" reads a sign on the ground floor of Elgiz Museum. On a recent weekday, I was the only visitor who walked toward the direction of its arrow. It was early afternoon, the galleries were deserted, and I thought this was fitting for an exhibition that focuses on the Moon.

Recently, Halil Altındere used virtual reality technology to bring viewers on a journey to Mars. That work, still on display at Sadık Pasha Mansion in Cihangir, manages to be realistic and tongue-in-cheek in the same instance.

I ascended the stairs of Elgiz Museum, and I was slightly disappointed to see the floor covered by a pixelated image of the surface of the Moon. The surface at Elgiz Museum was flat - I had imagined something more realistic. As I walked on the NASA survey images, I didn't feel like I was walking on the Moon.

"The Moon determines the passage of time in Islam, whereas charts that survey it and attempts of conquering it, are products of Western thinking," I learned from a text on the wall. I found this idea about the Moon's temporal and geographical uses intriguing, and I started looking at the floor more carefully after reading the sentence. Now I started noticing coordinates on the lunar surface. This was a work of meticulous cartography. The experience of walking on the NASA survey images gained an unsettling new aspect.

SARP, the artist who created the lunar experience, is 26. Born in Paris, Sarp Kerem Yavuz focuses on multimedia art. He works with light projection, video and photography. He showed his work in Sydney, Palermo, New York, Chicago and Dubai. He works between Los Angeles, Chicago and Istanbul. In 2013, Istanbul Modern included his works to its permanent collection. SARP is the youngest artist to achieve this distinction.

In the Elgiz Museum show, he attempts to combine sci-fi aesthetics and a critique of the objectification of the body. The results of this are not always satisfying.

SARP uses the Moon as a feminine symbol "representing the rhythm of time as it embodies the cycle." The exhibition embeds "an amalgamation of ideas, the East and West, sci-fi and space, futurism and time."

His treatment of the Moon as a contested territory is not entirely original. A more interesting parallel would be the plastic surgery industry and its treatment of bodies as adjustable maps. Here, four images of the woman body that adorn the gallery space seem to imply such a parallel. Images of the lunar surface are projected on them, and this combination produces an uncanny effect.

"In SARP's newest project titled LUNAR, the artist builds upon the light-projection technique he first began employing with his Maşallah series," writes Huma Kabakcı, who curated the show.

A graduate of the Curating Contemporary Art MA program at the Royal College of Art, where she is currently a Ph.D. candidate, Kabakcı recently co-curated a group exhibition at Istanbul's Anna Laudel Contemporary. She lives and works in between London and Istanbul and contributes to numerous publications, including Ibraaz, and the Guggenheim Blog.

"Using NASA survey images of the Moon, which includes markings and notations upon the lunar surface, the artist explores the female body as a canvas and a site of science fiction,"Kabakcı says.

"An amalgamation of ideas, the East and West, sci-fi and space, futurism and time is embedded with this new insta

llation. Materiality and mobility also plays a powerful role in LUNAR, as the tulles are hung and free-flowing like curtains, illuminated behind. Massive survey images of the Moon produced by NASA in the 1960s cover the flooring, inviting all viewers to set foot on the Moon."

This invitation is interesting, given the critical tone of the parallel drawn between the conquest of the Moon and the possession of the female body. If the markings and notations upon the lunar surface are displayed as warnings, wouldn't it be better for the viewer to keep her distance? Rather than setting foot on it, shouldn't we refrain from invading the Moon?

But, the photography is beautiful. Images of the floating women resemble curtains with their light materiality. If the surface section was conceived and presented in a more critical way, "Lunar" would be a brilliant show. In its current state, too, the show manages to raise questions about possession, colonialism and objectification. However much I disliked being asked to set foot on the Moon, the fact of walking on the images put me into a mood of self-scrutiny. I wondered about astronauts on the Moon and whether and to what extent they questioned the metaphoric significance of their conquering missions. Even for that act of imagination, it was well worth paying a visit to Maslak.