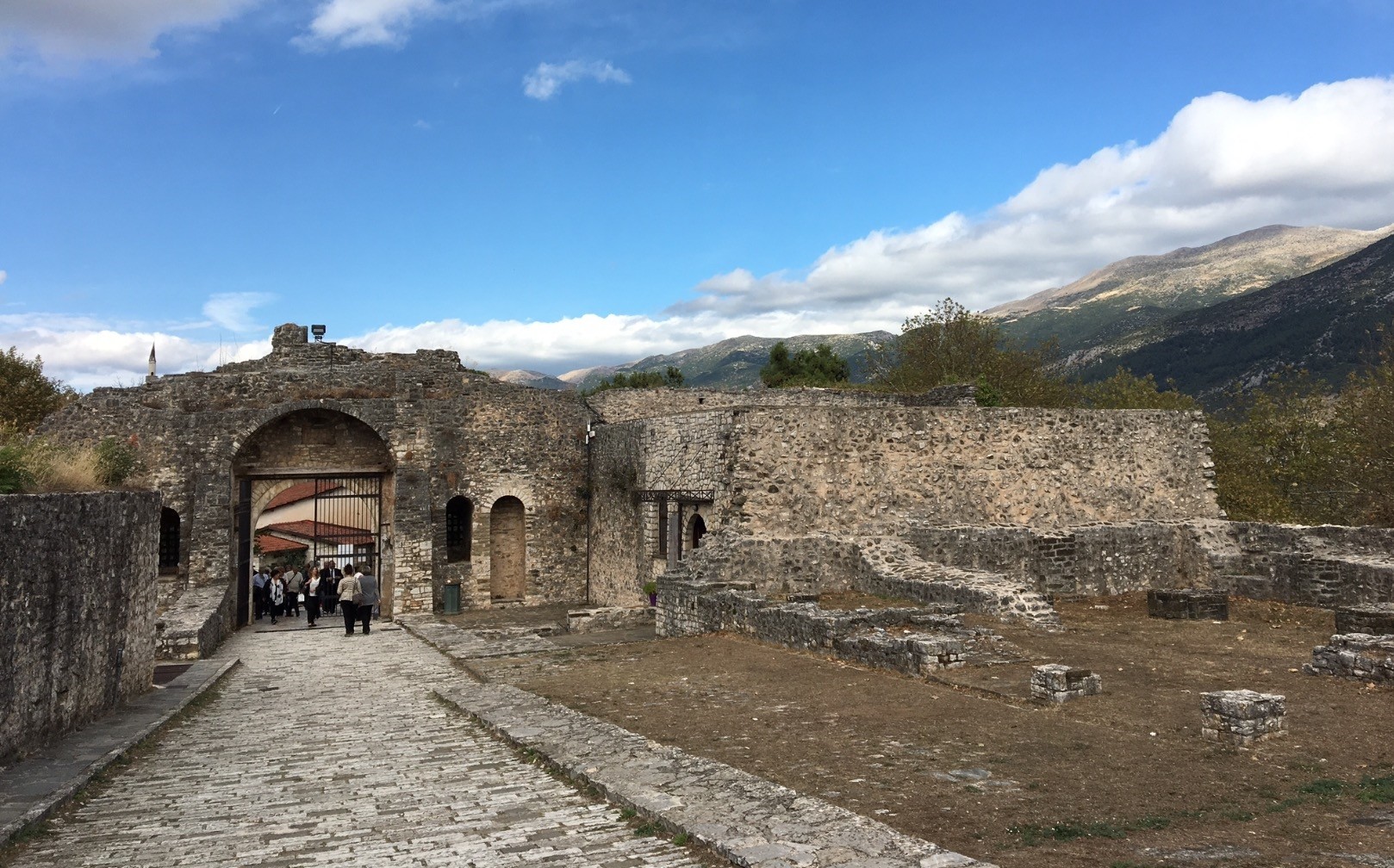 The Ottoman gate entranceway to the seraglio district that Evliya u00c7elebi describes in his 1670 visit to Ioannina as one of the four Muslim negihborhoods.
by Matt Hanson Oct 09, 2017 12:00 am

Ioannina is the capital of Epirus, a region known in history as the Greek mainland. Presently the fifth largest city in the country, Ioannina is a bustling university town with all of the intellectual airs of its singular reputation. It is famous for its silversmiths, its silk weavers and as the bygone seat of Ottoman autocrat Ali Pasha of Tepelene, Albania, whose tomb and mosque complex still crowns the castle district acropolis where an architectural revitalization has crystallized in the last year with the opening of the world-class Ioannina Museum of Silversmithing

The some 100,000 inhabitants of Ioannina have inherited what are arguably the best preserved examples of Ottoman architecture in modern Greece. Its alpine horizon is furnished with two beautifully maintained, though defunct mosques that rise over the lake from the natural rock of the acropolis under often overcast, silver skies. There are striking remnants of Ottoman architecture throughout the city, such as in the fortress walls of the castle district, built on foundations from Hellenistic antiquity through the Byzantine, Norman, and Venetian conquests.

On Oct. 9, 1430, the Ottomans had not captured Constantinople yet before first stepping foot in Ioannina when it was the Despotate of Epirus, an imperial state that succeeded central Byzantine rule. It was then governed by Carlo Tocco, an Italian count from the Ionian island of Cephalonia whose single year of reign primarily concerned the surrender of the city to Sinan Pasha, the "beylerbeyi," namely the commander of commanders of Rumelia, in the present-day Balkans. Earlier in the year, in late March, Sinan Pasha woke at dawn and led his forces into Thessaloniki, where he besieged the city.

The people in Ioannina heard of the tragedy that befell Thessaloniki, and they approached Carlo Tocco with the local bishop in a plea for peace. When Sinan Pasha and his army arrived in Ioannina both parties were prepared for a civil capitulation. It culminated in the Decree of Sinan Pasha, the very first Ottoman document written in Greek referring to a place in Greece. Its declaration enshrined the autonomy of Ioannina, with an unprecedented epochal legacy. 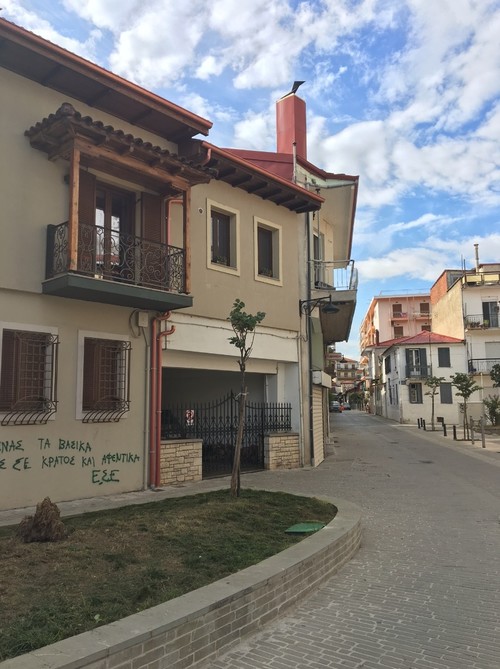 History was relatively kind to Ioannina. According to such scholars as Donald M. Nicol, author of "The Last Centuries of Byzantium" and Ersi Brouskari, editor of "Ottoman Architecture in Greece," Ottoman imperialism did not initially interrupt economic, political and social life nor the ethnic and religious traditions of the Byzantine era. More, with the later introduction of the Ottoman system of the "millet" administrating ethnic and religious community self-determination, the heart of Ioannina would endure multiple power shifts into modernity.

The Ottomans had not occupied Ioannina for a century before the native Christians revolted in a peasant uprising led by a figure nicknamed the Dog Sage. He was Dionysus the Philosopher and in 1611 he sparked Greek antipathy fueled by arbitrary property confiscations and child abductions. The backlash that ensued continues to define the architectural landscape of Ioannina as Greek Christians were then forbidden residence within the castle district. It soon housed Jews and Turks, whose histories shape the revitalized neighborhoods of Ioannina with nostalgic reminiscence and vintage aesthetics.

The city itself is a multilayered heirloom that changed hands between lost communities. The revolt of 1611 and the subsequent execution of monks and demolition of the monastery to St. John the Baptist on the northeastern acropolis led not only to the erection of the Aslan Pasha Mosque in its place in 1618, but to a cultural paradigm shift set by Ottoman rule in the region. Currently the Municipal Ethnographic Museum of Ioannina, the Aslan Pasha Mosque is an exotic antiques feast for the Romantic and the Orientalist alike, where authentic Ottoman Turkish script is visibly scrawled onto columns now polished between Jewish, Islamic and Christian folkloric aesthetics richly exhibited alongside one another.

At the highest point of the southeastern acropolis is the Fethiye Mosque, built on the foundations of a metropolitan Byzantine church to the Archangel Michael, where it is said that the Muslims accompanying Sinan Pasha prayed immediately following his decree as a symbol of territorial deference to the Ottoman Empire. It is kept in immaculate condition with respect to its Islamic elements, as are the two remaining marble columns from the original Byzantine church now beside the "mihrab" that once guided prayerful believers in Ioannina to Mecca. 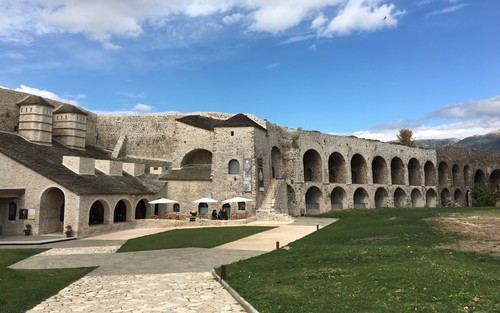 The preeminent Ottoman travel writer Evliya Çelebi saw Ioannina around the year 1670, and left a record of its 37 quarters, 4,000-strong population and 9,000 shops, including tailors, goldsmiths and silk merchants. He noted seven mosques in the city, and over 30 more about the local village environs. Other sources explored by Nikos Papageorgiou and Eleni Tsimpida tell of seven dervish tekkes (lodges) in 17th century Ioannina too. During this time, French doctor Jacob Spon traveled to Ioannina and confirmed detailed reports from Çelebi that the city was truly prosperous. However, it was not for another century when Ioannina gained its most illustrious, while controversial reputation led by the Lion of Janina, Ali Pasha of Tepelene. Of Albanian descent, Ali Pasha revolutionized Ottoman commerce in Epirus as he expanded international relations and stimulated a cultural revival among his Greek subjects, who he was just as quick to sew into a bag and drown in the lake.

It was while Ali Pasha presided over Ioannina from 1788 to 1822 when the city took its contemporary form with respect to preserving and revitalizing Ottoman architecture. Not only did he oversee the refortification of its castle walls, he declared Ioannina as his own sovereign region called the Pashalik of Yanina, and died for it. As Constantinople ordered him executed, the Greek War of Independence began in central Greece, and was finally won a decade later. British classics scholar David Brewer opens his definitive study of the Greek War of Independence subtitled, "The Struggle for Freedom from Ottoman Oppression" by explaining how Turkish forces were diverted from the core Greek insurrection because of the need to depose the separatist Lion of Janina.

Ali Pasha followed the bastion system of fortification for his reconstruction of the mainly Byzantine walls protecting the castle. The southeastern acropolis is still named after the Turkish, Its Kale (a transliteration from İç Kale), where Fethiye Mosque stands beside the metal-ribbed tomb of the Albanian autocrat and his bygone seraglio, now a former royal manor sheltering the Byzantine Museum. In recent years, the western bastion, located downhill behind the 1,000-year-old Bohemond Tower, fell into decay until 2007, when the Piraeus Bank Group Cultural Foundation incited plans to renovate the monumental walls into a museum.

Reconstruction after restoration after rehabilitation went into the chimneys, porticoes and archways throughout the interiors and facades of the Ottoman stonemasonry. The project was finalized and opened to the public in July of 2016, presenting a state-of-the art museum fitted into an authentic representation of pre-modern architectural sophistication. The historic space now illuminates the permanent and current exhibitions of the Ioannina Museum of Silversmithing, glorifying the tradition of metalworking artisans in Epirus, with special comprehensive analyses of the social and economic importance of the craft for Ottoman cultural heritage and its continuity in the postmodern contemporary.

For its commercial importance to Europe, the artisan industries of Ioannina were lauded throughout the 18th century, comparable to Marseille for P. Garnier, the French consul in Arta, and a veritable Manchester and Paris of Rumelia to the English diplomat D. Urquhart. Ali Pasha cleverly encouraged Greek-speaking cultural activity in Ioannina, bolstering the modern Greek Enlightenment. The renowned Epirote scholar Neophytos Doukas wrote: "During the 18th century, every author of the Greek world, was either from Ioannina or was a graduate of one of the city's schools." Its rustic, countrified Ottoman architecture blends with the landscape in an exquisite fusion of ecology and history.