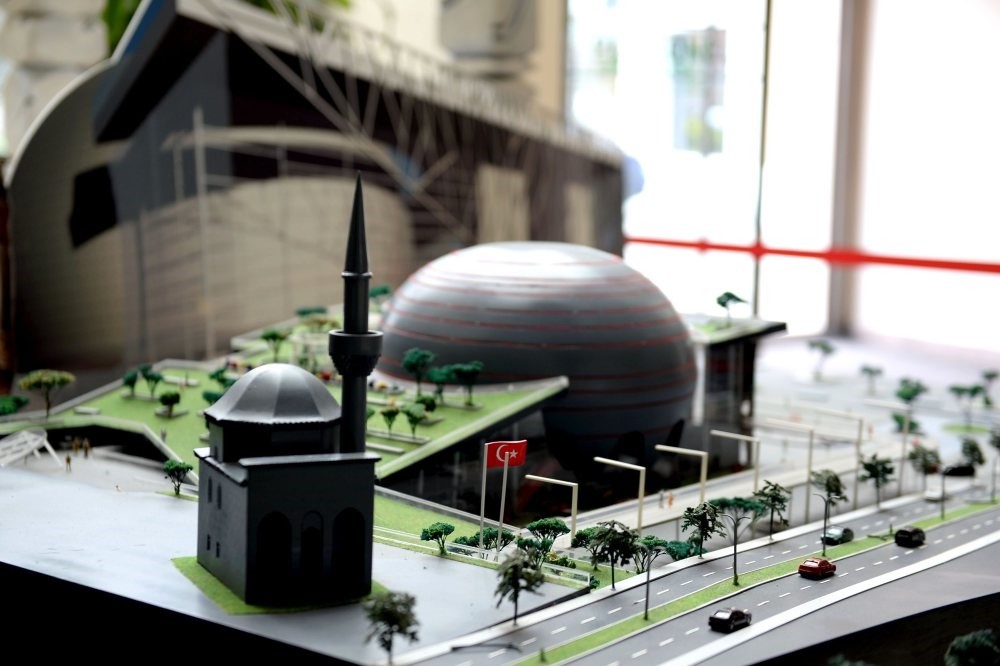 A mini-model for the ongoing building of the Panorama Museum in Bursa.
by Anadolu Agency Oct 13, 2017 12:00 am

With construction initiated by the the Bursa Osmangazi Municipality in 2015, the Panorama Conquest Museum, which will present the conquest of Bursa and the story of the foundation of the Ottoman Empire, is expected to be completed by the end of this year.

The museum, whose principal consultant was professor Halil İnancık, who passed away last July, was designed to be a green building. There will be an observation terrace and olive trees on the upper part of the museum, which is built over 4,300 square meters near the Ebu İshak neighborhood's Kamberler Historical Park. Artificial waterfalls will also be installed in the museum.

Cafes, conference halls, a library, administrative offices and an exhibition hall with a capacity of 1,000 people will also be found in the museum, which will display special visuals to introduce the conquest of Bursa and the story of the Ottoman Empire's establishment.

Osmangazi Mayor Mustafa Dündar told Anadolu Agency (AA) that the foundation of the museum was laid in August 2015.

Explaining that the museum will be a cultural center, Dündar said: "This place will be kind of an education center. When students visit, they will learn of this period by seeing for themselves. Sixteen important events in Bursa's history will be depicted in the 16 paintings at the entrance of the museum. In addition, this building will be important for its architecture. The place will have a new silhouette. We have built a building with materials such as stone, marble and tile, which were provided from Bursa. There are some smart buildings like this one in Turkey, but there is no other example of it in Bursa."

Goal to finish this year

Explaining that energy will be used efficiently in the museum, Dündar said: "It will be a building that saves on energy in heating and cooling. Fountains and pools will contribute to the cooling of the building in the summer months. Rain water will be stored, too."

Expressing their happiness to introduce a building like this in Bursa, Dündar said: "The painting of the museum will be prepared by the artists who also did the paintings for the Panorama 1453 History Museum in Istanbul. This building is important for Turkish history. The foundation of the Ottoman Empire will be depicted there. We will have the opportunity to see the siege of the fortress and the condition of Bursa in 1326. The museum is combined with a park here. When looked at from outside, the mound and the globe can be seen. The entrance of the museum will be through the park like a shelter. The surrounding area will be enlivened and Bursa will have a nice center.

"The final touches and the arrangement of the garden are being done now. After we complete it soon, we will leave everything to the artists. The artists will paint the old Bursa nearly a month later. We hope to finish it at the end of this year. We plan to hold the official ceremony in April 2018, as part of the conquest festivals of Bursa," the mayor said after he explained that the construction of the museum, which will cost TL 35 million ($9.6 million), has been completed.