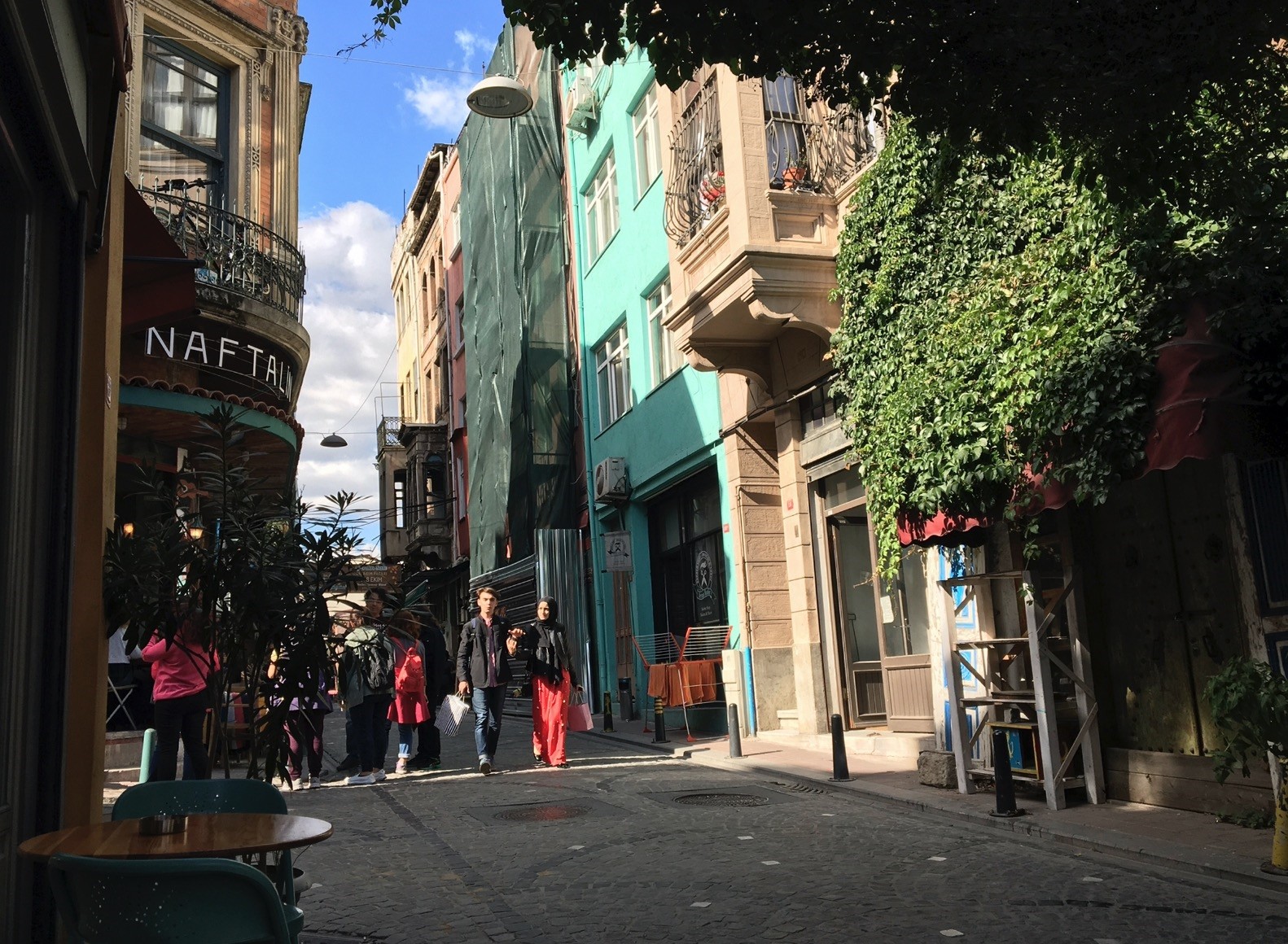 In Fatih, the most historic district in Istanbul, the neighborhood of Çarşamba remains an experiment in social conservation, as it uniquely incubated its exceptionally orthodox Muslim community during the Turkish national transition from Empire to Republic. Initially named after a district in Samsun where the community's Ottoman ancestors emigrated for Istanbul, it borders the traditional Greek and Jewish neighborhoods of Fener and Balat, respectively. Its residents circumambulate İsmail Ağa Mosque, built to the dimensions of the Kaaba, and follow the lifestyle of Prophet Muhammed so closely as to wear his clothes and use his toothbrush

A year after founding of the Republic of Turkey, Mustafa Kemal Atatürk applied his modernization reforms by closing both secular and Islamic madrasah schools in 1924, and later the dervish lodges in 1925, but the Muslims of Çarşamba held a unique political advantage neighboring the Greek Patriarchate. Its residents remained where they have ever been strictly observant to the leadership of Ismail Ağa, uniquely conserving Ottoman Islam into the Republican Era. As most Islamic orders (tarikat) across Turkey went underground following the dissolution of the Caliph and a slew of laws that would forbid everything from clothing to music, Çarşamba prayed on to tradition relatively uninterrupted. 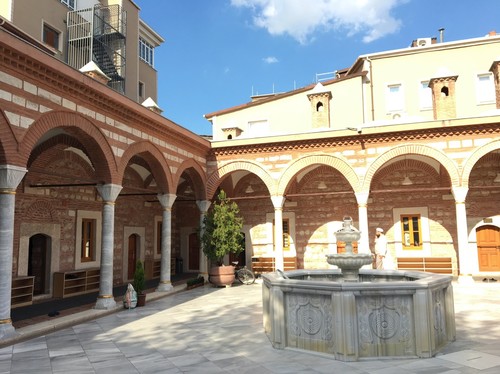 Inside the Ismailağa Mosque, the madrasah is furnished with beautifully polished stone.

The Greeks of Fener were powerful despite the population exchange of 1923. Situated along the coast of the Golden Horn since antiquity, they had maintained the Patriarchate of Constantinople through successive imperial transformations from the Tanzimat Era in 1839 following the loss of the Greek War of Independence and into the post-imperial paradigm. To successfully build the modern Turkish nation Atatürk had to make at least a few concessions with the past. Çarşamba was one.

The prevailing inhabitants of Çarşamba are Sunni Muslims, meaning that they follow the Prophet Mohammed in accord with his example, called the "sunnah," and believe that his father-in-law Abu Bakr was his rightful heir as first caliph. The way they observe the sunnah sets them apart as they adhere to Mohammed's lifestyle as the ideal model of human behavior, social and personal, material and spiritual. Çarşamba is considered the most conservative Muslim neighborhood in Istanbul, and it not so merely because of its religious practices as part of the Naqshbandi Khalidiyya order led by the 18th century Sheikh of Islam, Ismail Ağa, but due to its political history alongside neighborhoods of unrivaled importance to the largest ethnic and religious minorities from Ottoman times, that being Greeks and Jews.

Jewish history in Istanbul begins along the Golden Horn in the Fatih neighborhoods of Hasköy and Balat, where the synagogues of Ahrida and Yanbol claim Byzantine cultural roots as founded by Romaniote communities from the Balkans. As its Ottoman homes inscribed with the Star of David attest, it is regarded by regional historians and heritage descendants as a place where many Jews lived prosperously, and had strength in numbers. Even last year, one of its early synagogues, Istipol, was at the center of international attention when it was vandalized.

In Turkish, one of the words for light is "fener," as is common to the Greek "faros." The neighborhood of Fener, immediately next to Balat on the Golden Horn shorefront, was named after a columned lighthouse that once guided ships through the waterways of Constantinople when it was Greek-speaking New Rome. Interestingly, the people of Fener had lived there for such a spell as descendants of Byzantium that by the early modern period they were speaking and writing in a Greek dialect known as "Phanariote."

Atop the steeply sloping hill past the unmistakable architectural landmark of the Fener Greek High School, established in 1454, the year following Ottoman rule, the Ismail Ağa Quran School rises above the cityscape horizon as the streets of Çarşamba flatten on the high ground. Downwind about its lofty, arched entranceway is the more modest girl's school. Like the dervish lodges, present-day madrasahs such as the gender-segregated Ismail Ağa Quran School are still obliged to the reforms set by Atatürk. They are formally private education centers without the privilege of granting diplomas. In lieu of greater legitimacy, the neighborhood organizes such affairs as the "icazet," where children memorize and recite parts from the Quran, and some carry dreams of becoming a "hafız," one with the ability to sing the full Quran by heart.

And around the corner from the five-story Ismail Ağa Quran School is the community environs of the neighborhood, with its storefronts that to many Western travelers could seem to appear out of an Orientalist tale. During one entirely ordinary day in the week, three men held down the fort inside a common tailor's shop on Ismail Ağa Street beside storefronts named Medine Gömlek (Medina Shirts) and Osmanlı Terzi (Ottoman tailor). Two of the men specialized in stitching and selling the "cüppe," a long flowing overcoat garment seen as often in Çarşamba as a sport jacket is in the rest of Istanbul. The third man was fully adorned, with a cropped, long beard and a sarık turban, that when topped with red lining identifies a sheikh.

Traditional religious clothing in Çarşamba recalls the classism of Ottoman society when to wear certain garments signified hierarchal standing among men. As the well-dressed religious man and his fellow merchant in the tailor's shop explained, the "cüppe" is worn, accompanied by its loose-legged pantaloon, the "şalvar," to both cover immodest areas of the body, and to serve men's health. Simply, it is comfortable, and facilitates an ease necessary for wellness in the groin area. In the window of that storefront was a peculiar, blue plaid "cüppe," as it aesthetically aligned to the dominant fashion of the day with its collar and shoulder lines cut to fit in proper businessmen and even a head of state. 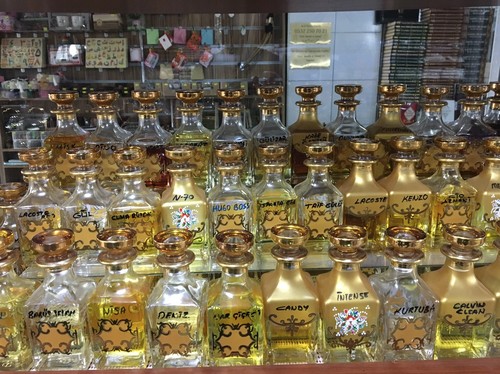 The neighborhood shops and small businesses of Çarşamba are rife with religious symbolism as they are named to reference everything from the sutras of the Quran to cities in Saudi Arabia. Locals circulate wealth and goods in a small-scale economy as so much of what they manufacture and sell is specific to the community. A vibrant example are the publishing houses distributing Arabic books, Turkish translations and Quran studies. Ottoman-signed tekke caps are for sale next to 33- and 99-count tesbih, prayer beads, for the "zikr" prayer to remember the names of God, and for "namaz," to bow prostrate repeating sacred phrases. Connoisseurs in Istanbul come to Çarşamba to buy perfume, as they sell alcohol-free scents in countless varieties, and with irresistible names like Friday Breeze and Calvin Clean. And of course, they purvey the "miswak," a premodern brush that looks like a stick and that the Prophet Mohammed is said to have used to clean his teeth. 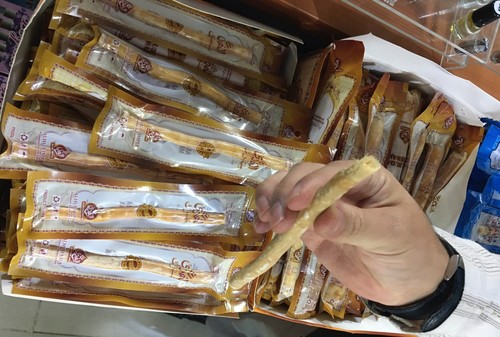 On the corner of Ismail Ağa Street and Manyasizade Avenue, the main thoroughfare through the neighborhood is the community core, the Ismail Ağa Mosque, first ordered built by Ebu İshak İsmail Naim Efendi, who served as the Sheikh of Islam from 1716-1718, the highest ranking title in Ottoman Islam holding the power to confirm the sultan. Ismail Efendi is buried on the mosque grounds, which include immaculately maintained polished marble architecture with a fountain centered inside an arched caravanserai-style madrasah. Its original structure is the exact width, height and length of the Kaaba stone in Mecca, and due to the special privilege of the community going back to the days of Atatürk, they were able to restore and extend the building with the last renovation in 1952.

The story of Çarşamba and its social conservation is increasingly important to the fabric of Istanbul and the nature of multigenerational urban life everywhere. As the historic minority neighborhoods of Fener and Balat gentrify anew and swell with the rise of contemporary Turkish capitalism, the relatively small and introspective neighborhood that survived the Republic is now facing the new wave of modernity on the front lines of globalization.