Mexican sculptor Jorge Marin's "The Reconstruction of the Being" and "Dizelerin Renkleri" (Colors of Lines), which includes the works of renowned sculptors and artists as well as the original manuscripts of prominent poets of Turkish literature, have opened with the attendance of Bernardo Cordova Tello, the Mexican ambassador to Turkey.

Speaking at the opening ceremonies for the exhibitions at Folkart Gallery, Tello expressed that Jorge Marin is one of the contemporary sculptors of Mexico who has dedicated himself to his work and specializations with bronze.

Sculptor Jorge Marin also spoke, saying he has been welcomed and attracted attention in Turkey, and the reason is the similarity between Turkey and Mexico. Marin mentioned that Turkey and Mexico share many cultural and social similarities, adding that the citizens of these countries are very loyal to their cultures. 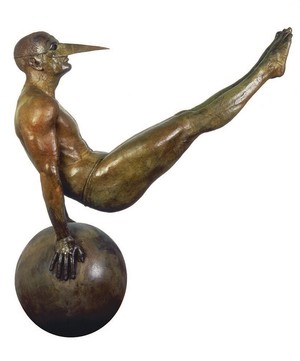 Jorge Marin's exhibition titled, "The Reconstruction of the Being" includes 10 bronze monuments that reflect the construction process of the being.

Folkart Gallery's Chairman of the Executive Board Mesut Sancak also said this meeting was very significant, adding that they have witnessed the unification of the universal arts of sculpture, poetry and painting. Noting that eight exhibitions have been opened so far at Folkart Gallery, which opened in 2015, Sancak reported that they have hosted more than 200,000 visitors.

Mexican sculptor Jorge Marin's exhibition titled, "The Reconstruction of the Being" was previously on exhibit at the Haydar Aliyev Cultural Center in Baku. The exhibition, which includes 10 bronze monuments that reflect the construction process of the being, can be seen now in İzmir until March, 4, 2018.

The exhibition titled, "Dizelerin Renkleri," which is being held for the Turkish Foundation for Children in Need of Protection, houses the original manuscripts of prominent poets in Turkish literature and the works of 37 artists and sculptors.

These works will be placed on exhibit until Dec. 10 at Folkart Gallery and will be on display in Ankara and Istanbul later. The works will be sold at an auction that will be organized in the coming months by the foundation. All proceeds from the auction will go to the Koruncukköy-Urla Children's Village.