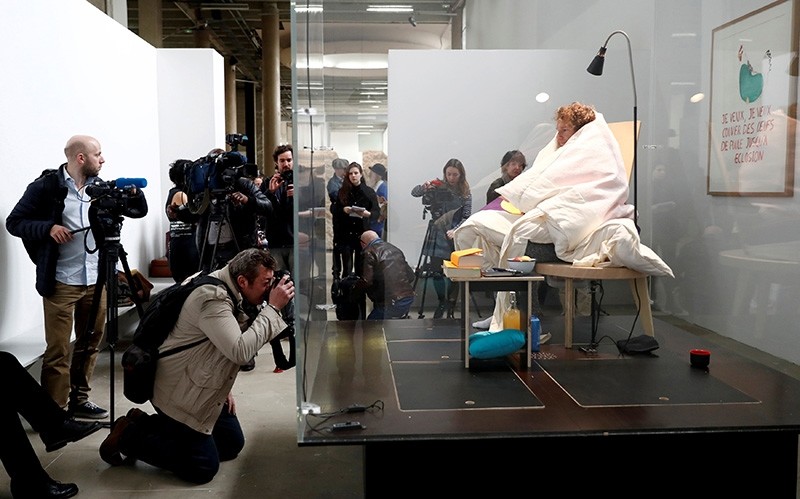 French artist Abraham Poincheval is seen in a vivarium on the first day of his performance (Reuters File Photo)
by Compiled from Wire Services Oct 18, 2017 12:00 am

French artist Abraham Poincheval, who famously spent a week inside a rock and two weeks inside a bear sculpture, has succeeded in hatching chicken eggs after incubating them for some three weeks.

Poincheval embarked on his latest project in late March of imitating a mother hen by incubating some 10 eggs with his own body heat inside a glass vivarium at Paris' Palais de Tokyo contemporary art museum.

At the time, he estimated it would take 21-26 days for the eggs to hatch and the first did so Tuesday. A spokeswoman for the museum said Thursday nine had hatched and the chicks were on their way to a farm.

For the endeavor, Poincheval sat on a chair, wrapped in an insulating blanket, over a container with the eggs. He could leave his seat for no more than 30 minutes a day for meals. 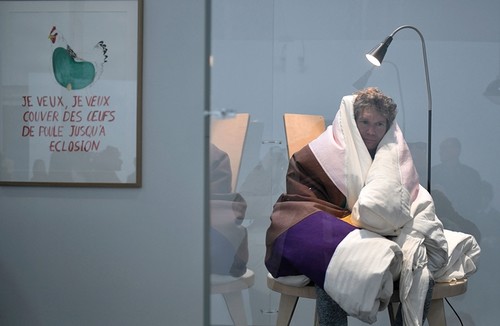 Last month the man dubbed France's most extreme artist made headlines worldwide after spending a week entombed inside an egg-shaped rock at the Palais de Tokyo.

But animal rights group PETA said they took a dim view of the birth of the chicks, the first of which emerged Tuesday.

"There is nothing to celebrate in the birth of this chick born alone in a museum," the organization said in an open letter to the artist.

"Considered merely as a part of an 'artistic' performance, it will never meet its mother.

"Animals have no place in art," it added.

But a spokeswoman for the museum insisted that the chicks, eight of whom are yellow and one brown, "are doing well and they are going to live in the country" with Poincheval's parents.

His father Christian told AFP that he had made them a luxury hen house on his Normandy smallholding where they would live out their natural lives.

Poincheval senior, an inventor best known for his pills which make farts smell of roses, promised the chicks would never end up in the pot.

"I can assure you that they will never be the centerpiece of a grand feast," he added.

A museum spokesman said that although he was exhausted after the marathon performance during which he never left the vitrine, he was "very happy. He never hoped that so many of the eggs would hatch."

"It has been really tough for him. He has slept sitting on the eggs. It's been a lot harder than being shut inside the rock," the spokeswoman had earlier told AFP.

As well as having to spend 23-and-a-half hours a day sitting on the eggs, Poincheval had to contend with the heat, having to keep the eggs at a minimum of 37 degrees Celsius (98.6 degrees Fahrenheit).

The 44-year-old artist is no stranger to bizarre performances.

He once spent a two weeks inside a stuffed bear eating worms and insects, was buried under a rock for eight days and navigated France's Rhone river inside a giant corked bottle.

His big dream, however, is to walk on the clouds.

"I have been working on it for five years, but it is not quite there yet," he said.