Micklegarth to Istanbul: A brief history of Anglo-Turkish culture 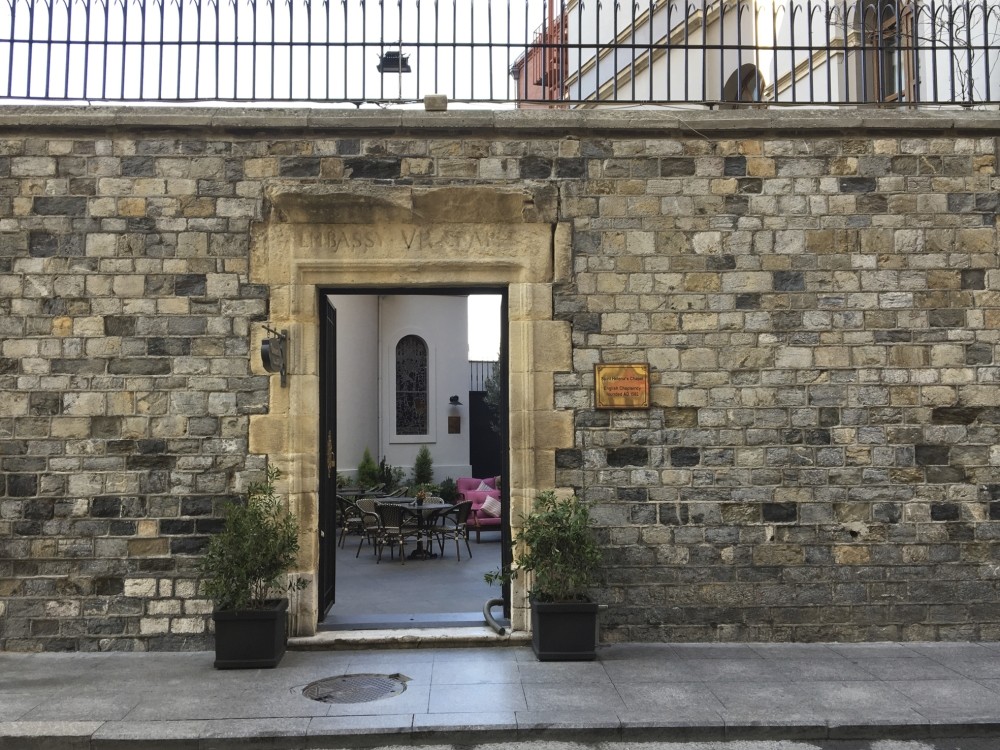 The 19th century English chaplain is a landmark in Pera, traditionally the European neighborhood of Istanbul where modernism first began to spread from the Sublime Porte.
by Matt Hanson Oct 24, 2017 12:00 am

Istanbul proper is a tangle of spires. Its historic cityscape horizon is legendary, and not for its heights so much as for the depths of its foundations. Its walls, domes and towers have ascended from the shorefront bluffs facing the Sea of Marmara and the Bosporus strait for 15 centuries. Along its European coastline, across the waterway of the Golden Horn inlet from the Old City, the 14th century Genovese-built Galata Tower overshadows its only architectural companion with a looming bird's eye view, the former British Seamen's Hospital.

The earliest confrontation between Turks and the English was likely around the time of the First Crusade. If before, such a meeting would have occurred following the height of the Roman Empire's territorial expansion in the second century. It was only a relatively short-lived span of about three centuries when Asia Minor and England shared imperial subjection under Rome. Even then, from the perspective of contemporary historiography, world civilization looked westward as Rome first seized Britannia in 43 A.D. before occupying the ancient Greek-speaking lands of Hellenic Anatolia 70 years later.

Unlike the proud Greek legacy left by Alexander the Great, the Romans did not impose a universal language. Latin was reserved for legal courts and the military. One of the earliest writings about Turks in Greek and Latin literature survives in the works of Byzantine Greek historian Theophylactus of Simocatta, dating from the seventh century, about a hundred years after Rome had lost Britannia. And later, as the initial Turkish occupations of Anatolia and the Levant began after the Seljuks triumphed at the Battle of Manzikert in 1071, the English reeled from the Norman Invasion five years prior.

The son of William the Conqueror, the first Norman king of England, had short legs and a shorter temper. Named Robert Curthose, he was fond of plundering castles and counties in his native France. At the age of 28 he unknowingly wounded his father on the battlefield. He was not favored to inherit the crown of England. At 47 he was the sorely impoverished Duchy of Normandy who mortgaged his territory to his brother, the English king, to finance a personal army to join the First Crusade. He first met Seljuk Turks near the present-day Anatolian city of Eskişehir at the Battle of Dorylaeum in 1097 before seizing Jerusalem.

Although he never spoke English and was illiterate, Biography.com asserts that William the Conqueror "had more influence on the evolution of the English language than anyone before or since - adding a slew of French and Latin words to the English dictionary." Yet that was not enough to persuade many powerful Anglo-Saxons from the greater public to remain subservient. They petitioned Byzantine Emperor Alexis I Comnenus for land and soon boarded ships in the hundreds to Micklegarth, the "great city" that had recruited Scandinavian mercenaries for as long as they knew of it. History tells of the first possible English meetings with Turks by a migrant route along the Black Sea, documented as the medieval New England by an English monk in France in his 13th century Latin chronicle titled "Chronicon Laudunensis." 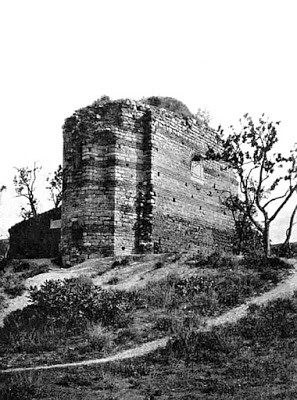 The English guard of the Byzantine Empire settled around the Black Sea and built a church in Constantinople. Likely the oldest site of Anglo-Turkish culture is now in ruins in the Old City.

At least four written sources tell of the Anglo-Saxon colony on the Black Sea following the arrival of maiden English voyages to Constantinople in 1075. Written about a century later, the "Chronicon Laudunensis" dates the disembarkation. A parallel account titled "Edwardsaga" (the Icelandic Saga of Edward the Confessor) from the 14th century also mentions the Seljuk Turks as "heathen folk" who were then besieging Constantinople. The English political refugees became Varangian Guards, protecting Micklegarth as settlers of the Crimean region for some eight generations into the 14th century. They used Anglophone place names like Londina and even sought autonomy as they fought Tatars at home and the Seljuks in Constantinople.

While the Anglo-Saxon Varangian were said to toast to the Byzantine Emperor in English, the degree to which they socialized with Turks, and even possibly exchanged cultural and linguistic knowledge, is all but lost to the historical record. The word "Turk" itself is rife with complex ambiguities as its usage transitioned through the literally byzantine kaleidoscope of empires and cultures, languages and rulers. Throughout antiquity and the medieval eras, Turk was synonymous with barbarian and infidel. Only during the late 19th century, as Turkish elites who identified as Ottomans promoted European nationalism among loyal Anatolian villagers, did the word "Turk" gain enough positive connotation to assume its respectable modern identity.

Not only is the Turkish language itself rooted as a regional dialect common to nations as geographically and culturally diverse as the Chuvash Republic in Siberia and Northern Cyprus, but like with any language, it absorbs linguistic elements from its surroundings. In a recent book published in May of 2016, Moscow State University Prof. of Byzantine Studies Rustam Shukurov has shown that from the early Seljuk Sultanate to the Ottoman conquering of Constantinople in the mid-15th century, late Byzantine Anatolia had distinctly cultivated and preserved Greek and Turkish bilingualism. It could be argued that with the Hellenic and Byzantine heritage of the land base in Modern Turkey, Anatolian Greek integrated with the development of Turkish more substantially in many ways than any other language.

The fact that Greek and Turkish respectively were the lingua franca for empires that lived and died alongside one another has modern parallels to the bygone contexts of bilingualism. English, for example, is the predominant global language not only as a result of its imperial history but in dynamic relation to contemporaneous imperial societies and postcolonial states. Its transition from the language of the British Empire to that of a modern nation-state is worlds different than the story of Turkish, which shed its Persian-Arabic influences and Latinized its script to become practically indistinguishable from its pre-modern counterpart.

Interestingly, there are a great many words in English of Turkish origin. Besides place names like Balkan, which comes from the Turkish for "a mountain chain" there are words like bergamot, literally from "bey armudu" (the bey's pear), kiosk from "köşk", an open summerhouse pavilion, and doodle, after the Turkish flute "düdük." In August 2012, the BBC published a special feature demonstrating reports that showed English originated in Turkey, as part of the Indo-European language family. It's known as the Anatolian Hypothesis and it stems from the 1980s in the research of Lord Renfrew, whose data on evolutionary linguistics was reconfirmed by phylogenetic DNA analysis.

In an old bilingual Turkish-English dictionary by Redhouse, a scholar named Charles Wells introduced the second edition from London in 1879 with a statement in the opening paragraph reading: "It is difficult to account for the absolute neglect of the study of such an important language, considering that it is used by a people who influenced half the world, who overturned and established empires, who have possessed the thrones of Persia, Syria, Greece, and Arabia, whose power was once dreaded by Italy, Germany and France, and to whom our proud Queen Elizabeth applied for aid against the Spanish Armada."

During the time of Queen Elizabeth I, the first Muslim on record settled in England. He was a Turk from present-day Euboea. It was the 1580s, and the English Barbary Company was established to trade slaves and deter Spain. Captured from a Spanish ship, he converted to Anglicanism in 1586 before six pence a day was paid to Turkish converts two decades later as nearly 40 Muslims, most Turks, soon called London home. By the 17th century, they opened coffee houses and Turkish baths.

Anglo-Turkish is an ongoing intercultural fusion arguably heard loudest in music. In the last decade, Dr. Dre and Mos Def sampled Selda Bağcan's "İnce İnce" based on a folk song by Aşık Mahzuni Serif. And in 2003, Turkish pop singer Sertab Erener insisted on singing in English at the Eurovision Song Contest, to the chagrin of everyone from the Turkish parliament to the head of the Turkish Language Society. "Half the world listens to English," she said. "Why shouldn't they listen to a Turkish artist in English?"