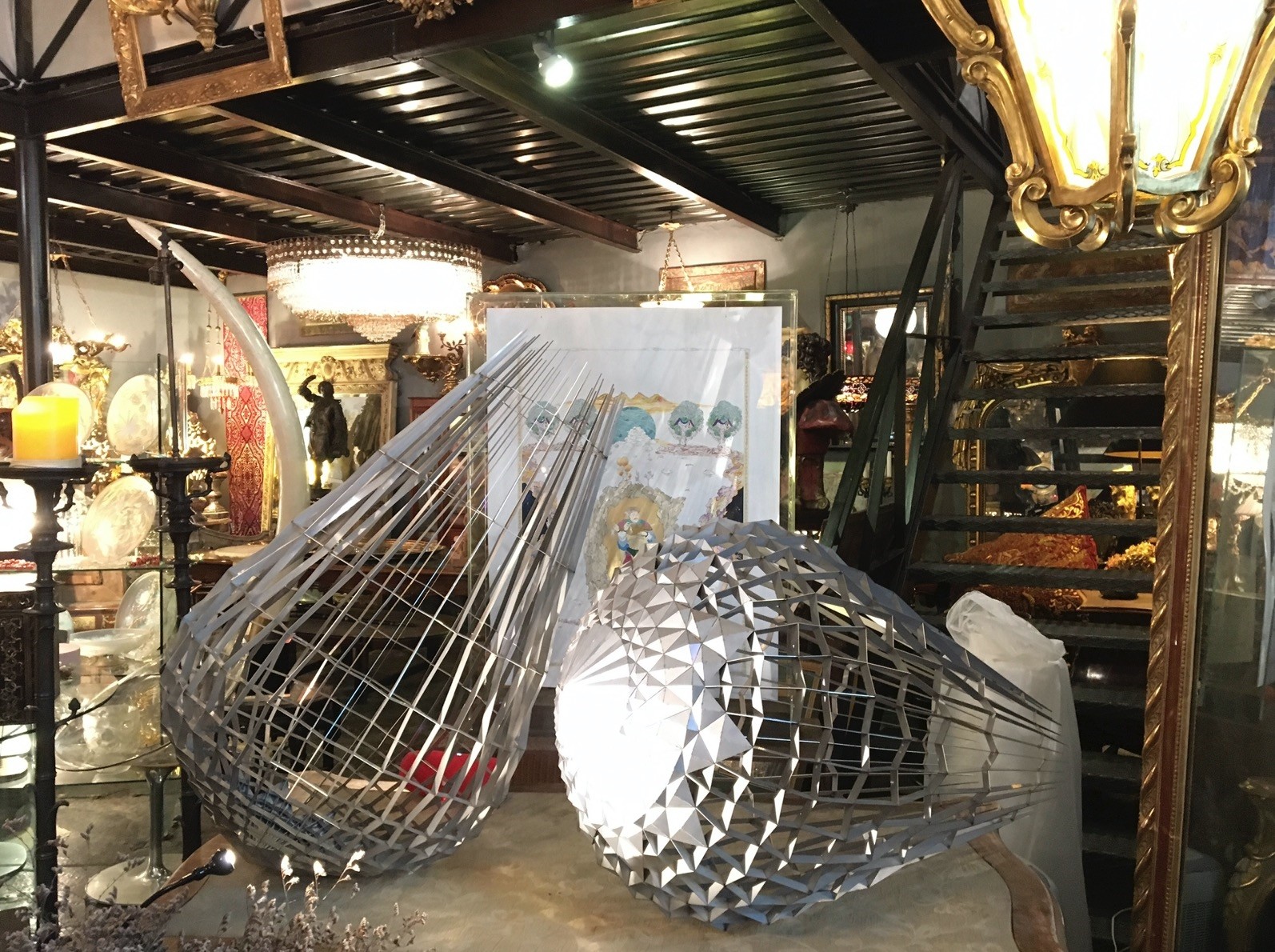 Director and project manager at BLOK art space, Hikmet Mizanou011flu was captivated by the contemporary sculpture of Sahand Hesamiyan.
by Matt Hanson
Nov 06, 2017 12:00 am

As the director and project manager at BLOK art space, Ms. Hikmet Mizanoğlu attended the fourth annual Jameel Prize exhibition at Pera Museum last year, and was transfixed by Tavizeh, a pair of bulbous, conical stainless steel pods by the contemporary Iranian sculptor Sahand Hesamiyan. The piece is on loan in her extravagant nostalgia shop, Antikacı, to be displayed until September 2018 around the corner from BLOK art space in Çukurcuma

The steeply woven streets of Çukurcuma are a phantasmagoria of popups, galleries, designers, workshops and collectors. The neighborhood is more surreal in contrast to the historic core of Istanbul across the inlet shores of the Golden Horn, where the mystic horizon of the old city gives way to an otherworldly aura. They are at opposite sides of the social spectrum. And yet, BLOK art space is anomalous for its cross-cultural, site-specific work that spans disparate urban geographies from its exhibition space that juts out from a sloping corner in Çukurcuma where Faik Paşa Avenue meets Erol Taş Street to an installation room in the 17th-century Ottoman inn, Büyük Valide Han.

The BLOK art space in Çukurcuma is relatively spare, though effective in its simplicity. The current exhibit by Sahand Hesamiyan is "Majaz," a self-made gallery show and installation organized by Mine Kaplangı to demonstrate a diverse range of spatial perspectives under stylistic lighting. The forms of contemporary sculpture elaborate and expose the apparent emptiness between shadow and concept in traditional design architecture. It will run until Nov. 30 as a downtown portal through the expansive contemporary art realm to the worldly definitions of history and religion as they have patterned the life of the city for centuries. 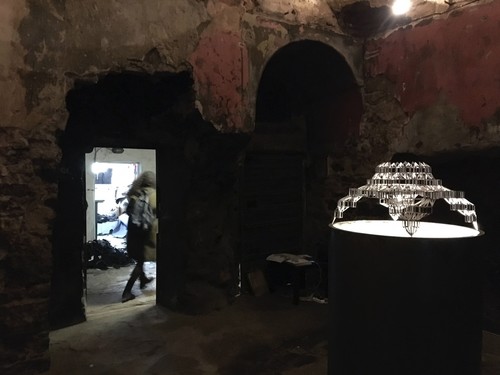 "Majaz" translates as metaphor, though its meaning is closer to the spiritual idea of the unseen, as the imperceptible, formless soul that makes architecture inhabitable, especially when built for religious and metaphysical purposes. Sahand Hesamiyan draws from his cultural surroundings as an artist born and based in Tehran. It is specifically the Islamic architectural concept of the "muqarnas" that he elaborates in his primary stainless steel works and raised, gilded paper designs shown at BLOK art space in Çukurcuma.

While BLOK art space began with intentions to welcome and embrace collaborative local art on the immediate streets about the neighborhood, it soon realized a grander inclusive scope in one of the 210 rooms of Büyük Valide Han amid its exotic, 400-year ambiance. Every Saturday, a guide from the gallery leads the more curious of Istanbul's art lovers by tram over the Galata Bridge for a creative exercise in cultural time travel. Gülin Ören is a cinema theory student who works at BLOK art space to escort fresh eyes from Çukurcuma to Eminönü while sharing her special conversational brilliance enough to pierce the veils of history and religion with the story of "Majaz," and most importantly, its experience. 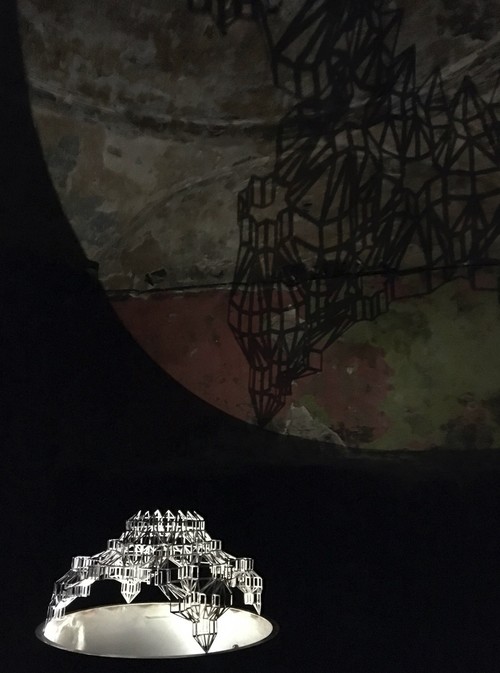 Sahand Hesamiyan adapted the sacred geometry of Islamic architecture with his essentialist aesthetic. A revolving light penetrates through his steel work to cast an optical illusion of three-dimensional shadows against the interior of a single-domed room inside Büyük Valide Han. Its effect is spiritual and enlightening as it uplifts the archaic forms of historical worship with timeless creativity. Hesamiyan reanimates the decrepit burdens and sobering realities of the age with a liveliness that evokes the innocence of a first-time traveler.

As the traditional Islamic regions and its peoples tire of ceaseless, heavy-handed cliches and grow increasingly weary of the ongoing conflicts between exploitation and fundamentalism, structural artists like Hesamiyan are deepening the base on which collectives of pride and identity may stand taller to mature toward creative independence. While observing simulated night and day under the spell of Buşra Tunç, who worked with Hesamiyan to research light and shadow at the Büyük Valide Han site, the twofold BLOK art space show provokes the enigma of the past to rear its ghostly face, as it is reborn from the unseen art of contemporary sculpture.

The installation's visitors listen to the meditative, enchanting instrumental "Mahtaab" by the Iranian musician Hossein Alizâdeh. Its title translates equally from Turkish and Persian as the poetic image of the moon's reflection over water. "Majaz" is a trans-historical experiment that strikes at the root of Istanbul's social foundation, and it is achieved with awe-inspired gravity behind a nondescript door within the medieval confines of Büyük Valide Han. The cracked stone wall beside the industrial metal door into the site bears the BLOK art space insignia, yet down the hall the complex of activity is as puzzling, and mystifying as the history of the space itself. African garment stitchers work beside costumed period actors. A man who seems from another era polishes a Byzantine lamp across the hall from a French literature scholar and jeweler. 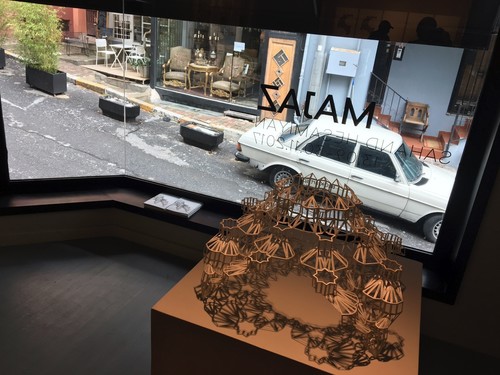 Between her enslavement and assassination, Mahpeyker Kösem became synonymous with unequivocal female power in the Ottoman Empire, as she rose from imperial consort to serving as wife and mother to four sultans. In 1623, during the initial year that she commissioned an anonymous architect to build Valide Han in her name, which still functions as a business multiplex known as Istanbul's largest historical inn, she became Valide Sultan, the official title of the sultan's mother. Her son, Murad IV was only 11 years old when he ascended the throne, leaving her to rule the empire.

In the courtyard of Valide Han, a 17th-century Shiite mosque continues to operate for the Iranian minority in Istanbul whose cultural heritage is intimately linked with Ottoman-Turkish language, art and tradition. In bygone times, Persian bachelors lived in the inn above the small factories whose merchants assembled to hawk wares only a short walk from the Grand Bazaar. The work by Hesamiyan completes a circle of time, as the pre-modern setting of his installation is woven through Istanbul's contemporary multicultural fabric. "Majaz" speaks to the perpetuity of the Turkish-Persian cultural exchange in the present, and also recalls its deeper relationship which fundamentally gave birth to Turkish Islam. There is a quiet and gorgeous subtlety to "Majaz" as it honors that spiritual kinship by sharing collective space with local Iranian Muslims.

Walking to and from Valide Han is a trial for the senses, as its elaborate "muqarnas"-sculpted gateways andnarrow pedestrian corridors wind through a mind-numbing chaos of clothing and textile retailers whose peculiar characters and manners echo with the regional influences of the centuries. As she smilingly asks the way from countless salesmen, Ören openly expresses her creative intellect. She enjoys the opportunity to see the "Majaz" installation repeatedly as a BLOK art space guide, appreciating the artwork uniquely based on her understanding of the cinematograph, one of the earliest devices projecting film. And like in cinema where the celestial environment is of utmost importance, as people commonly watch movies after dark in contrast to projected light, Islamic architecture is set to the dynamic of night and day, along with its traditional musical modes (maqam) and prayer rites (namaz).

"In a sense, every period conceptualizes, analyzes, or reflects upon its own city in the context of the zeitgeist. When the city in question has ancient roots like Istanbul, the number of locations that the contemporary artist can create a dialogue with, partake in, form a relationship to include the viewer in the experience becomes countless," wrote Esra Aliçavuşoğlu in the BLOK art space exhibition publication for "Majaz," translated by Ayışığı Hale Gönel. "The existential practice we form with the space is in this sense more important than we figure, as it is a necessary element in forming ourselves. Similarly, in a socially produced space that has kept up with cultural transformations since the 17th century, Sahand Hesamiyan navigates the corridors of Büyük Valide Han with what he calls 'the mesmerizing guidance of light,' searches for and finds traces of his own cultural past, the building's memory, and the geography that the artist was born in and grew up with, and allows the viewer to experience a metaphor of this archaeology."