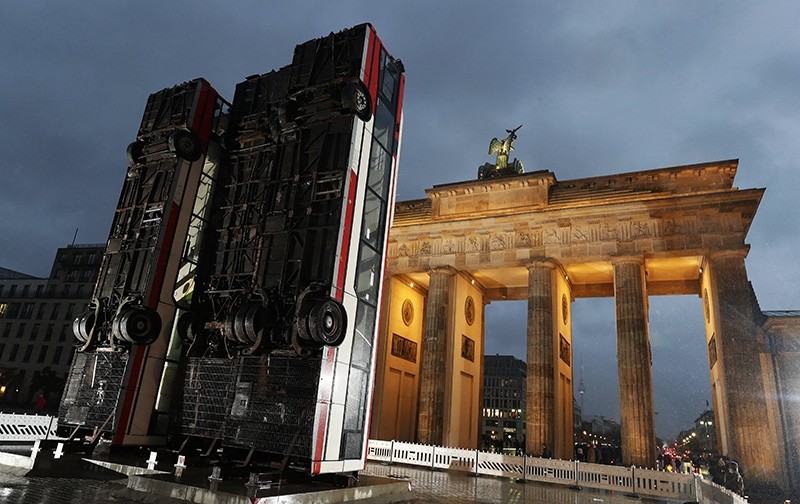 General view of the installation of the artwork 'Monument', created with three buses propped up vertically by Syrian-German artist Manaf Halbouni in front of the landmark Brandenburg Gate in Berlin, Germany, 10 November 2017. (EPA Photo)
by Nov 10, 2017 12:00 am

Three upended buses, a reminder of a barricade erected in Aleppo in 2015 at the height of the Syrian civil war, appeared in front of the Brandenburg Gate in Berlin on Friday as part of an installation by Syrian-German artist Manaf Halbouni.

The exhibit drew protests by far-right activists when it was shown in the east German city of Dresden last February. Demonstrators said it belittled the memory of the city's own devastating bombing during World War Two.

Halbouni said the exhibit, which evoked a scene from 2015 when opposition forces sought to protect Aleppo from Assad regime snipers, was meant to send a message of unity.

It was installed a day after the anniversary of the fall of the Berlin Wall in 1989.

"The Brandenburg Gate is a symbol of destruction and of the end of war. It was also a symbol of division, but then came to represent unity," Halbouni told Reuters TV.

Thousands of jubilant Germans climbed on top of the Berlin Wall near the 18th-century gate after the wall fell in November 1989, reclaiming what was a no-man's land during the years of division between the former Communist east and West Germany.

Entitled "Monument," the red and white buses stand just one block from the Holocaust memorial, a somber reminder of the millions killed during the Nazi regime of World War Two.

"This is an installation against war and against all that is going wrong in this world," the artist said.

It is part of the Berliner Herbstsalon, or "Autumn Salon," which includes 100 cultural events organized by the Maxim Gorki Theatre across the German capital.

"It's a little bizarre, but ... that's art," said Dieter Krapp, a tourist from the Eifel region in western Germany.

Florian Breitenwieser, a Berliner, said the exhibit was a reminder of the peace and well-being Germany now enjoys.

Aleppo was taken over by the regime army in December 2016 after years of fighting with the opposition and a siege that forced them to retreat.