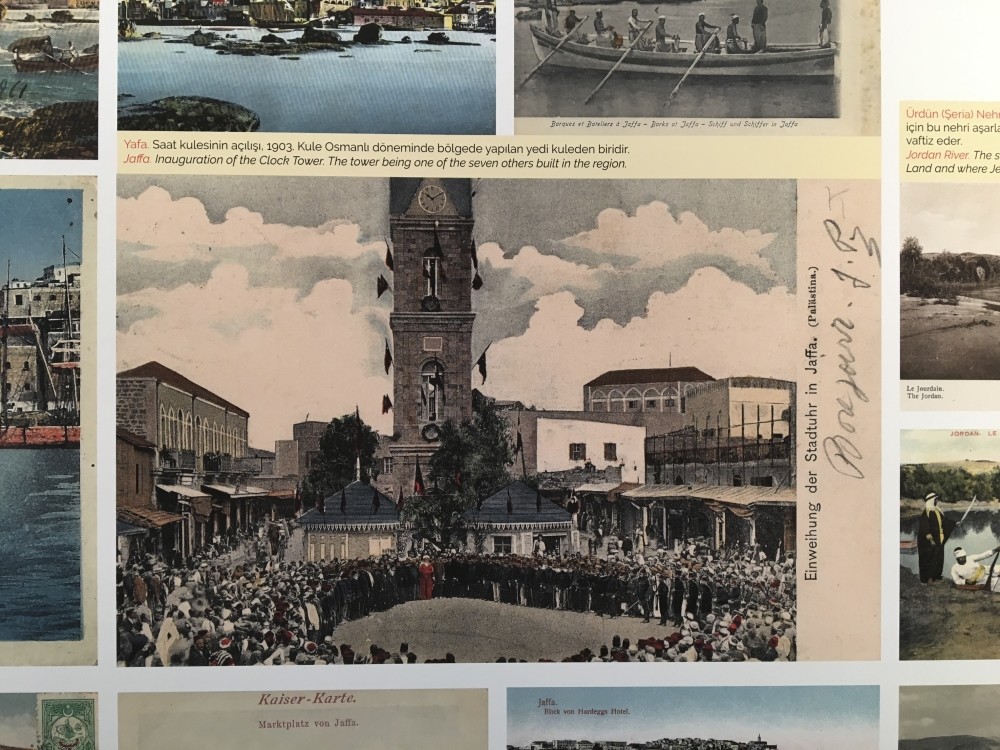 The postcards at the exhibition tell much about worlds lost to history yet restored with insightful detail.
by Matt Hanson Nov 10, 2017 12:00 am

The early medieval Genoese neighborhood around Galata Tower descends to the Karaköy ports over the spiral-woven Kamondo Stairs sculpted in the elaborate stone of the pre-modern infrastructure. Narrow, cobblestone streets beg a passing glimpse, and for the more curious, a thorough wander, leading many to the doorstep of the 19th century Tailor's Synagogue, now the Schneidertempel Arts Center. Its gallery currently exhibits the rare postcards of collector Seyhun Binzet in a lucid curation that rekindles life in the Levant from 1890 to 1920

While the Jewish heritage of Istanbul is widely celebrated for its Sephardic culture and the Greek-speaking Romaniotes who came before, the Eastern European Ashkenazi Jews who lived in the eye of the Sublime Porte were a special minority within many minorities. By 1894, the Union of Ashkenazi Tailors finished building Beth ha Kenesseth Tofre Begadim, which, from the Hebrew, essentially means the Tailor's Synagogue. It was a house of worship for generations of clothiers who had settled on the northern shores of the Golden Horn not far from Karaköy port. Historically, the Bosporus had been a pilgrimage link to Jerusalem for cities on the Black Sea coast like Odessa, where the Jewish community made up over a third of the population by the turn of the century. 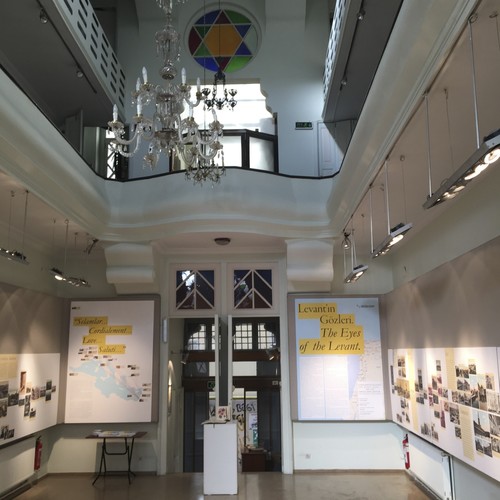 "The Eyes of the Levant" is a unique curation of antique postcards from 1890 to 1920 from Ottoman-era Levant at Schneidertempel Arts Gallery in Galata, open until December.

By the late 19th century, the Ashkenazi community needed a Chief Rabbi. They read the international Jewish press for candidates. German papers mentioned a distinguished rabbi named Dr. David Markus originally from the Poland-Prussian border, though educated in the Netherlands and Germany, where he taught classical languages and mathematics. As an Enlightened Jew, he had received a secular education in psychology and philosophy and worked diligently to modernize Jewish life. He pursued his work in Istanbul after arriving in the year 1900, eventually transforming community development in the oldest Jewish neighborhoods of Hasköy and Balat with German aid. His efforts revitalized an unused synagogue, and after gaining Turkish nationality following the Constitutional Monarchy of 1908 he encouraged Turkish language learning among Jews. Finally, he bridged the enmity between Ashkenazi and Sephardic communities, who had ceased intermarrying over disputes, and established a modern education system for Jews in Istanbul.

The Tailor's Synagogue became the Schenidertempel Art Center in 1996 under the auspices of the Dr. Markus Cultural Association 50 years after congregants moved religious ceremonies a short walk away to Yüksekkaldırım, the second of three Ash

kenazi synagogues in Istanbul, and the only one still holding active services. Since the inaugural art exhibition at Schneidertempel in 1999, the center has held numerous shows celebrating everything from photography to caricature, music, literature, tango, painting, and currently historical postcards. In the winter of 2008, cartoonist Izel Rosental launched his book, "Aquarium" at Schneidertempel, where he has become a public figure and multigenerational community member, as his grandparents were married at the Tailor's Synagogue.

Rosental recounted the facts of his illustrious local heritage at Schneidertempel with a bright smile on the evening of Nov. 1 to mediate a panel of fellow high school students from Lycee Saint Joseph. They could hardly contain themselves as they beamed with friendship and laughter throughout the course of the event held to discuss the current exhibit, "The Eyes of the Levant," which will be on display until Dec. 3. Seyhun Binzet spoke first as the postcard collector. He own

s more than 15,000 and has given exhibitions to highlight various aspects of them in Bursa, Çanakkale, and London.

In the 13th century, seafaring Italian merchants coined the place name "Levant" to mean the Eastern Mediterranean. It is a term from another era, before boundaries carved the land into the American and British colonial concept of the Middle East and its surrounding postcolonial nationalities. It refers to a geography without modern definitions. "The Eyes of the Levant"is an exploration of a historical theme, and offers a special perspective on the present as curated within Schneidertempel. The transformation of synagogues around the world into museums and cultural centers is part of a general paradigmatic shift likened to revisiting antique and vintage postcards. It is well-expressed in a Sephardic proverb: "Two Jews, four synagogues." At a point in time, practical use becomes secondary to cherishing the preservation of memories.

Schneidertempel doubles as publisher and bookseller, purveying rare gems such as "Anyos Munchos i Buenos," a wonderfully comprehensive photographic and textual work on the Sephardic Jews of Turkey by Ayşe Gürsan-Salzman and Laurenc

e Salzman. In the Schneidertempel exhibition catalogue to "The Eyes of the Levant," there is a short historical treatise on the region, richly explained from the earliest era through the defining Arab conquest of the eighth century which remains the dominant social milieu. Binzet chose 270 postcards for the current exhibition dated between 1890 and 1920. They are rife with daily observations and emotional confessions in the languages of Ottoman Turkish and French, the global language at the time. Film producer Engin Özden designed the exhibit with Binzet in minute geographical detail to expand on the colorful primary source material of the postcards, as they were sent from over 30 cities from the modern-day countries of Syria, Lebanon and Israel.

When he spoke with the panel, Binzet compared the postcards to pre-modern social media, describing them as similar to popular social media sites like Facebook. A younger audience member raised the point that the postcards are most like Instagram, as they were intended to be snapshots of moments that pinpointed a sender's location with relative ease and speed through the post. They also conveyed the visual and linguistic trends of the day. And beyond popular culture, they document highly personal excavations from the immediate experiences of private lives while forwarding visuals from broadly diverse local societies. Binzet remembered two postcards from the same battle against a Turkish army. In one, the soldier proudly described the battle as a success, while the other maintained that it was awful enough to attempt a medical discharge ruse.

While many mosques and churches are depicted in the postcards, along with fundamentally sacred places like the interiors of the Dome of the Rock and Al-Aqsa Mosque in Jerusalem, synagogues are extremely rare. He only mentioned one in his collection, from Edirne. The religious proscription that forbids visualizing the sacred in Judaism includes picturing synagogues. And to write on such an image is all the more sinful to orthodox tradition. That said, there are many postcards on Jewish life, and almost all of them offer special contributions to the historical record. As a land whose people have endured misappropriation among colonialists and invaders lost in multiple translations, primary source material is perpetually revealing, and all the more so when placed in a new light such as at "The Eyes of the Levant."One such postcard is inscribed in French under a meticulous graphic of the Tabernacle, the portable temple of the exiled Israelites.

When he first gathered his collection for the current exhibit, Binzet excitedly called his old high school friend, the retired Galatasaray University professor of French philology, Osman Senemoğlu, who initially thought he was being asked to speak about the "Levantens," what Turkish historians call non-Muslim Europeans living as traders in Ottoman territories. He soon clarified the hurried speech of Binzet and prepared a lecture on the linguistic origins of the Levant. That most of the postcards are written in French summons the expansionist notion of "La France du Levant," as led by the descendants of French Protestants exiled after the French Revolution. Engin Özden followed his discussion to conclude by emphasizing that "The Eyes of the Levant"is a geographical exposition, and that there are manifold layers to the postcards, from its storytelling to its sociology and well beyond to historic truths that are often much stranger than fiction.