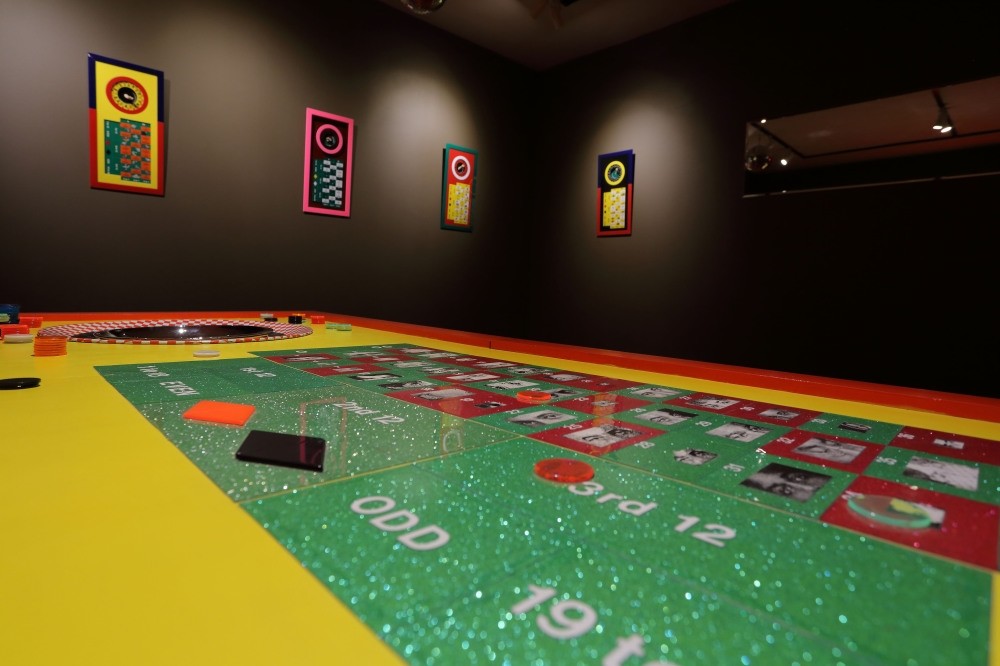 The gallery resembles a casino and visitors are invited to place play bets on the roulette table, and by doing so, change the fates of numerous people whose life stories Duben meticulously collected over the years.
by Kaya Genç Nov 18, 2017 12:00 am

Meclis-i Mebusan Street in Istanbul once housed the Ottoman Parliament. Nowadays students from Mimar Sinan Fine Arts Academy and white-collar workers from insurance companies frequent its by-streets. This month, Merdiven, a new contemporary art gallery, opened its doors in one of the commercial buildings there. Not long ago, I took advantage of the Indian summer and walked toward the famous rainbow steps of Meclis-i Mebusan Street where Merdiven is located.

Inside the gallery, İpek Duben's installation "LoveGame," welcomed viewers to an uncanny world. The gallery resembled a casino, and to my eyes, it attempted to reflect Turkey's frustrations through a playful installation. Visitors are invited to play place bets on the roulette table, and by doing so, change fates of numerous people whose life stories Duben meticulously collected over the years. 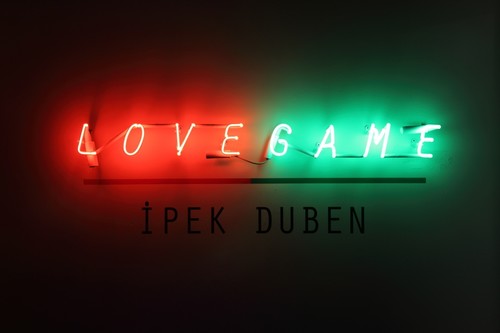 "The work is about domestic violence, potentially worldwide, that is to the extent I can expand my data base to include societies and countries other than Turkey," Duben said in an interview last week.

Duben made "LoveGame" while living in New York during the 1990s. Together with its twin project, "LoveBook," the project was produced between 1998 and 2001. Before the twin projects, Duben worked on "Manuscript 1994," which she says concerns her "own identity issues as a modern woman coming from a secularized Islamic social world."

In 1981, Duben produced a work titled "Şerife" The painting depicted an ordinary migrant peasant who makes a living for her son by cleaning houses. "Şerife is a nameless, nonexistent entity represented by a series of dresses in the form of a headless woman," Duben said. "In all these instances the problem women were facing was one of denial and suppression of their identity as individual human beings by the power of traditional male dominance." 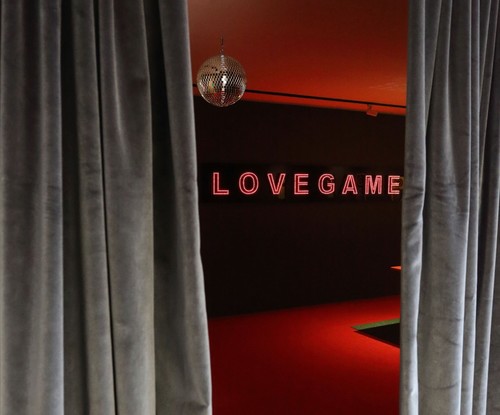 Meanwhile, Duben grew an interest in women's rights and she started collecting news stories about domestic abuse. "I developed this archive of domestic violence mostly in Turkey and the U.S. and in a few other countries as well," she said.

"In Turkey and other traditional societies, like India or Egypt, elder women in families and female neighbors are likely to tolerate or approve male violence against women suspected of failing to protect her 'honor.' In 'LoveGame' I used many cases of domestic violence committed against wives, husbands, lovers and children by partners or parents." Those same partners, or parents, are expected to be the most loving and trusting toward women they murder or sexually abuse.

Duben first exhibited "LoveGame" in 2001. Today, it sadly remains a timely work, and many viewers will feel a chill as they look into the faces of victims of domestic abuse on the roulette table. Stories of so-called "love crimes" fill pages of Turkish newspapers, and the pattern seems resilient to powers of time and regulation alike.

"Exhibiting 'LoveGame' 16 years after its premiere, and a decade years after its second showing, I feel that the work is as strongly relevant today as it was in 2001," Duben said. "Stories about domestic crimes travel much more easily these days, and we are made aware of the immensity of the problem. ... Women have become more aware of their rights and they can demand varying degrees of reciprocity. This is quite difficult for men to adjust to. Asking for a divorce or not accepting a marriage proposal can be enough reason for rejected men to kill 'their' women, and also for a 'desperate' wife to murder her partner."

Love and murder are closely related in the cases Duben explores on the roulette table. "The connection between the criminals represented with their eyes on the playing table, and the victims represented with their full portraits inside the roulette wheel, stand for actual criminals and victims," she said. "As the game is played, the connection between them is not real. It is determined by the viewer who places a chip on the number of a criminal on the checker board, selecting him or her as the predator of the victim whose fate is determined by the dice in the rolling wheel as it comes to a stop."

Duben expects viewers to play the game and take part in determining destinies of their victims. "In most of my installations I hope to integrate the audience into the work," she said. "As they interact with the work, I hope to create empathy and consciousness about the issues at hand. We normally try to avoid facing or accepting unpleasant, difficult and painful parts of our private and public lives. ... I try to break through this denial process and raise consciousness as much as I can, through my work. I believe one of art's functions is to touch humanity in this way."

Interestingly, some viewers refuse to play the game. "They admit their fear in taking responsibility in such life-and-death issues," Duben said. "Of course, part of my aim here is to question our convenient stances with regard to the limits of stigmatizing victimized personalities. ... Our luck, our fate, our chances are all part of the life's great unknown. We take and play our chances."