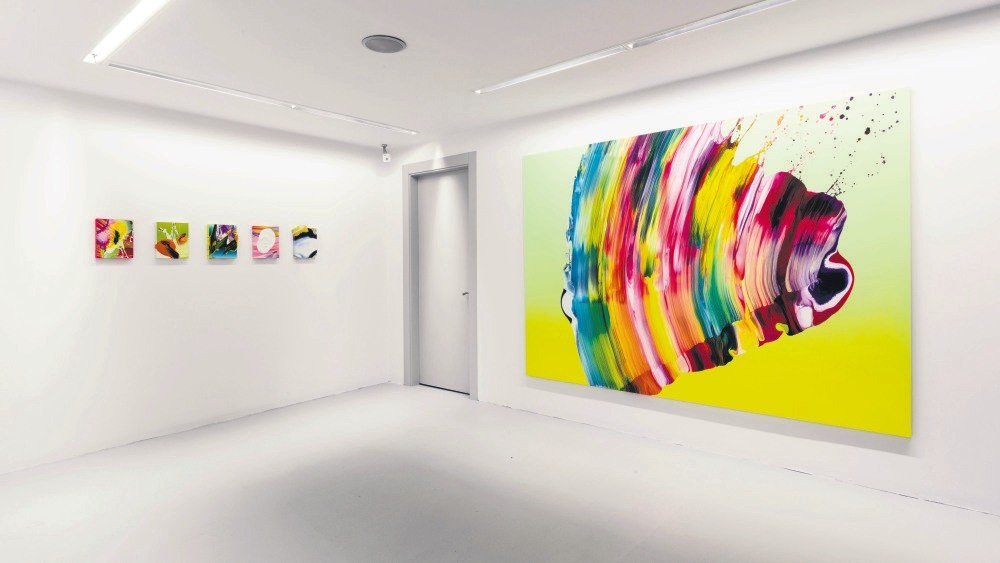 According to the curator, the show u201cbrings together new works by the artist where he has experimented with traces and tracing through paintings.u201d
by Kaya Genç Dec 02, 2017 12:00 am

Some paintings excite the viewer, others seem dull and uninteresting and a few manage to intrigue and even unsettle. Yago Hortal's work belongs to the latter category. His abstract compositions, with their interest in geometry, will remind some of the works of Adnan Çoker. His vivid colors, meanwhile, bring to mind the textures of Güngör Taner paintings.

But Hortal's work, on display at Dirimart Nişantaşı until Dec. 10, has a more flowing quality. They resemble waves - their forms are liquid and they appear to be in constant movement.

"How Rocks Move" is Hortal's first exhibition in Turkey. According to the curator, the show "brings together new works by the artist where he has experimented with traces and tracing through paintings."

"My color palette is derived from pigments that make me feel strong emotions," Hortal told Allure Magazine. "Mostly, I use pure colors, as they have the best intensity and vibration. I mix it by instinct, and I never use black. I do not eschew the color itself, and I do own some, but at this moment it is not necessary for me." 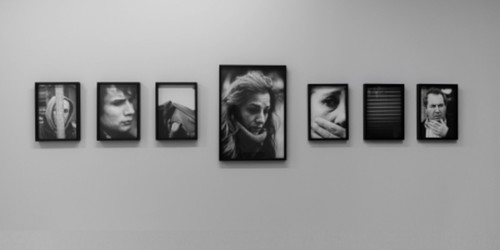 One acrylic titled "SP156" reminded me of Chinese year of the snake celebrations. It features two snake-like forms and the colorful shapes go their separate ways. In "SP147," the exuberance of color and form test the viewer. Some will find it a bit too much, and say the painting is more like a work of graphic art. But perhaps it is this in-between quality that makes Hortal's work curious and worth seeing.

"Marking, showing, proving are notions that Hortal works with, emphasizing the relationship of these notions with the word 'rastro' in Spanish," the curator writes. "The artist's interpretations are focused on conceptions of evolution, progress, and movement."

Hortal was born in Barcelona in 1983. He studied fine arts at the University of Barcelona and University of Seville. A year after his graduation, he won the 49th Prize for Young Painters. Aged 25, he started showing his work in solo exhibitions, in New York's Rooster Gallery in 2011, Berlin's Egbert Baque Contemporary Art, Galeria Senda in Barcelona in 2016 and Galerie Nikolaus Razucska in Salzbury.

In "On the possibility of portraying color," Carlos Jover described how "color becomes the pure motif in Yago Hortal's work, adopting all forms imaginable in conceiving a long-awaited psychological portrait of itself. This prominence carries the artist's work far beyond the brushstroke, also bringing into play other resources such as the outrageous style of dripping, the judicious spattering of bold strokes, the level of intensity pushed to the limit, the harmonious canalization within a certain randomness presented in the accidental paint on the canvas or working with experimental dialogue on backgrounds previously primed with color. Yet the most important of all is what governs the use of all these resources, that natural disposition toward the composition of the work, that singular mastery in bringing all the extreme elements to the equilibrium that makes Yago Hortal an extraordinary artist, someone who holds the keys to the realm of Alice in Wonderland."

Some of the small-scale work in the show, delicious with their candy-like textures, make subtle homages to the world of pop art and Andy Warhol's paintings. Indeed, Hortal was inspired by America while conceiving these pieces.

"Hortal's point of departure is the seemingly impossible movements of rocks in the Death Valley in Nevada. The rocks move on sand with what appears to be a propelling force from the outside," the curator explains. "The traces of these movements are only visible for a short amount of time. The artist relates this phenomenon with the painter's gestures and painting's relationship with recording and time. If

The balance between form and color and the relationship between experience and memory are at the heart of Hortal's work. His working methods are inspired by action painting and one senses that the process of creating the image, the performance itself, is an art for him.

"Like a tsunami, the apotheosis of color propels the viewer and provokes personal vibrations in union with the frequencies generated by the outrageous combination of colors," writes Carlos Jover of Hortal's work. "A vibration which becomes the internal pulse of the subject, since, as we already know, when all is said and done, the form of the subject is the color."

Perhaps, the primacy of color in his work was caused by Hortal's surroundings.

"My home has always been vibrantly painted," Hortal said in the Allure interview. "I lived in a multicolored house my entire life. My parents made it a point to always repaint, again and again, up until now, actually! Living while constantly surrounded by ever-changing colors was significant to me, and it is still an essential part of my life as an artist."