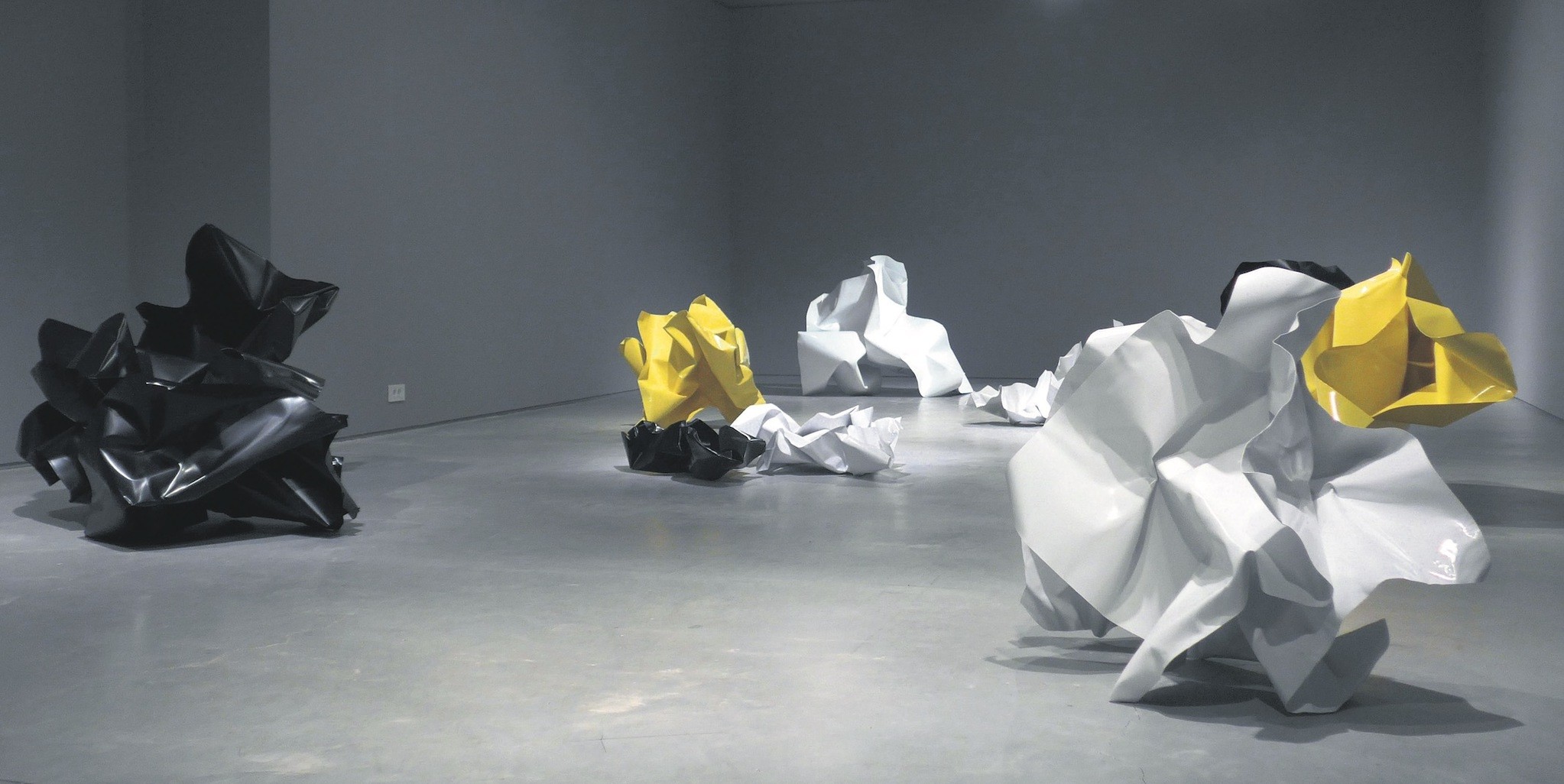 As one of the first sources for modern and contemporary art in Turkey Galeri Nev Istanbul recently moved its space from the crowds of İstiklal Avenue to the second floor of a modish building shared with three other galleries where the shorefront Istanbul neighborhood of Tophane borders Karaköy. Exhibiting aesthetic originality since 1987, it is a well-known establishment in the inner circle of the local, internationalist culturati. The gallery is known to unveil new works by late 20th-century icons, such as from the abstract sculptor Seyhun Topuz with her ‘Present Tense' show on display until Dec. 9

In his "Writings on Art," painter Mark Rothko emphasized repeatedly in the intimate prose he composed from 1934 to 1969 that he gave absolutely no credence to history and criticism with respect to the meaning and effect of his work. His broad, visionary palette of rudimentary schemes were simply the medium for his true art, that being the direct and undivided impact of his canvases on one human heart at a time. He was only interested in the immediate feelings that echoed from creator to observer through the actual, sensual experience of the artwork. The essence of his pieces only emerges in the present, particularly when beheld by appreciative eyes. It is in a kindred sense that the work of Seyhun Topuz appears for her 13th solo exhibition, "Present Tense," to enlighten contemporary art lovers in Istanbul as one of the evergreen elders of abstract sculpture in Turkey.

Topuz has ingeniously opened and formed a rare niche in her native country as a leading creative mind with a special passion for building new ideas. With her unparalleled originality and acute foresight, she has shaped the expression of materialism in her 34 years and running as she makes and shows some of the most unconventional of art objects on the global beat. Despite the barrage of questions from intrepid inquisitors who have wandered across the local art maps of Turkey and into Galeri Nev Istanbul since "Present Tense" opened on Nov. 3, the gallery's young and eloquent director Lesli Jebahar has remained loyal to the primary vision of the artist. Galeri Nev Istanbul receives diverse visitors who often arrive puzzled and with varying degrees of exposure to the frontiers of modern culture. The curation of "Present Tense" confidently affirms the absence of narrative in the latest series by Topuz. Prior to "Present Tense," Galeri Nev Istanbul opened its new space with an exhibition of video installations titled "Beneath the Horizon" by İnci Eviner, who had a prestigious retrospective at Istanbul Modern in 2016. It was a welcome return for the artist at the institution that launched her solo career, and yet the curation of projected light was decidedly less site-specific than "Present Tense." It is clear on entering the exhibition floor at Galeri Nev Istanbul that Topuz brazenly maintains the controversy that has defined modern art since its inception.

Topuz began experimenting with the pair of copper sculptures that she completed in 1984 and titled "Carbon Papers" after returning from New York for the second time. She had held her first solo exhibition in the year preceding at Maçka Art Gallery, the premier contemporary art venue in Turkey for 40 years until it closed in 2016 after the retirement of Rabia Çapa, its illustrious director. "Carbon Papers" remained etched in her mind and it has since resurfaced in an expanded form as "Present Tense." Instantly recognizable as a visual manifestation of crumpled papers, its blatant central image is attested by Topuz. As is clear while walking mindfully through the minimalist decor about Galeri Nev Istanbul exhibition hall, Topuz is equally a master sculptor of the empty space around her work. Similarly, jazz trumpeter Miles Davis reinvented music time and time again by playing to the silence.

Since moving, the showroom inside Galeri Nev Istanbul is now tastefully lit to best present static moments of time in the copper sculptures that Topuz contemplated for three decades and finally rereleased with all of her characteristic wit and artistic charm. It has also become an opportunity for the gallery to see inspiration in the potent, clear emptiness of the space and to consider novel directions with its increasingly important historic precedent. The first exhibition curated by Galeri Nev Istanbul in 1987 for the early modern painter, Abidin Dino, stands on common ground with Topuz at the forefront of Turkish art history. The return to an early, formative inspiration with "Present Tense" is a vulnerable, empowering move for the artist to retrace her steps, steadfastly dedicated to her evolutionary, creative self-guidance well into her 70s. Looking out over the trendy Karaköy alleyways, the gallery has a comprehensive collection of art publications on Seyhan Topuz's work.

When the 1980 military coup restructured Mimar Sinan Fine Arts University, they let Topuz go from her assistant teaching position. She went on to become the self-made independent artist of her distinguished renown as she emerged from her studio and matured beyond academia. Her desire for narrative expression fell away with her trust in the social and political integrities of her nation and its cultural establishment. Beginning around the time when she made "Carbon Papers," her art has consistently been a telling sign of her determination to represent herself as an individual down to the minutest detail in her work. In that spirit she would sculpt art to reflect nothing more or less substantial than the personal sensibilities that she could impress into the material at hand. What critics and curators define as "abstract" is in many ways simply the evolution of artistic production as it has moved from more marketably political and national contexts and into the direct and full poetic license of the artists themselves throughout the creative process and into the public realm.

With six larger pieces crafted from two contiguous sheets of copper, and five smaller ones made with a single sheet only, Topuz worked with her signature primary color spectrum. Black, white and yellow stand for carbon, copy and note paper, respectively. She fashioned the deceivingly simple works in her studio. The material demanded a strong, physical interactivity, as she bent and twisted and played with the stubbornly resistant pliability of the metal. The sense of great effort and at times total exasperations endured by the creative mind is perceivable in "Present Tense" as it reflects invisible and unfinished aspects in the drama of creativity which are vital to achieving a breakthrough. It is inevitably suffered in private among artists who undertake to speak in a natural, authentic voice through artificial transformations of media. Staring at the sculpted metal illusions of crumpled papers, an observer might stretch to see a renewed holism with everything that people tend to throw away toward the regeneration of the prevailing culture, which is habituated to waste as thoughtlessly as the average person might pass a fleeting glance at a modern art installation before looking away unaffected if only for a moment in the "Present Tense."

Topuz had typically always sketched her works before modeling them for sculpture. Unlike the key developments that came before "Present Tense" and its current exploration into her reflexive anachronism of crumpled metal, she was inspired by a completely spontaneous relationship between her artistic technique and the colored copper. By expressing the innate flexibility of her creative self as transcendent and ultimately outside of time, she enacted a cyclical return to an earlier stage in her growth as an artist. Topuz has crystallized the recurring aesthetic motifs that identify her contribution to contemporary sculpture and abstract art in "Present Tense." From her "Knots" exhibition, also held at Galeri Nev Istanbul in 2011 as a throwback to forms she first worked on in the 1980s, to "Collective Memory," a blaring series of basic forms in primary colors that revive childhood playground nostalgia, Topuz turns her public into seers aware that every concept related to time, such as success, age and even memory, is merely a tense abstraction of the all-encompassing moment.