Silent witness of rise of cinema comes to Istanbul screen 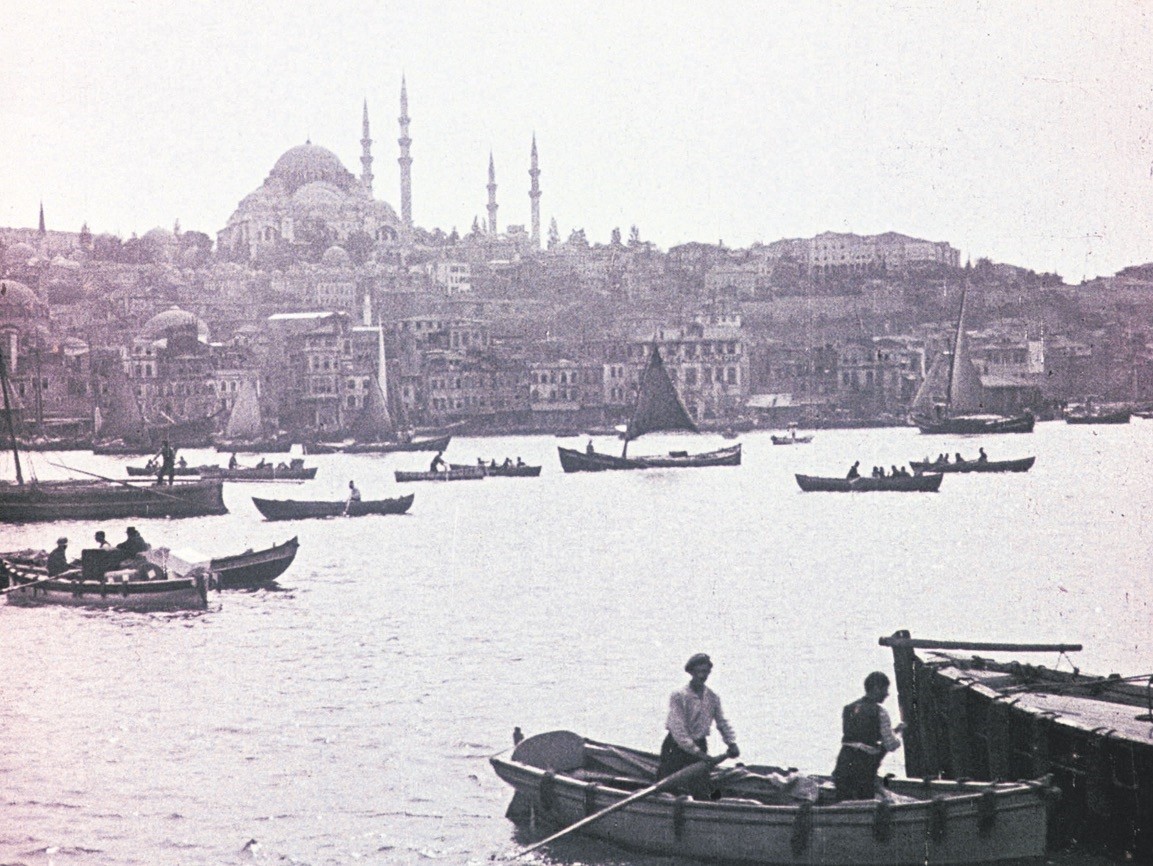 From Dec. 14 to Dec. 17, various movie theaters in Istanbul will be screening the first examples of the art of cinema, namely the silent films, most of which have been restored

Akbank Sanat will be hosting the 4th International Istanbul Silent Movie Days between Dec. 14 and Dec. 17, bringing unique and unrivalled movies restored from different archives all over the world. In addition, events with the themes of dance and silent movies will also be offered to visitors. Some of the most important musicians of the world, including John Sweeney, Günter Buchwald, Frank Bockius and Daniele Furlati, will accompany the silent movies.

Organized by Kino Istanbul and with the corporate partnership of Cineteca di Bologna and the Eye Film Museum, the festival is also supported by the General Directorate of Cinema of the Republic of Turkey Ministry of Culture and Tourism, Goethe Institute, Poland Consulate General, Italian Culture Center, Switzerland Consulate General, French Culture Center, Cinematheque Française and Filmoteka Narodowa.

The festival kicks off on Dec. 14 with "Die Weber," adapted to the movie screen by Gerhart Hauptmann's "Weavers" play thats focuses on the protests of textile workers in 19th century Germany. When the play was performed in 1892, it was an immediate hit, as it reflected the revolutionary wind that blew within Germany at the time and it is a great production that tries to stick to the original as much as it can without much intervention. In its cinematographic expression, the touches of Eisenstein and Pudovkin are felt, where the masses come forth and individual heroes are nowhere to be found. In this respect, the contemporaries of the German filmmakers at the time indicate how close they were to Soviet cinema.

"Die Weber" was restored in 2K digital format by Friedrich-Wilhelm-Murnau-Stiftung in 2012 based on the three copies that survived from that time and are located in the archives of German Film Institute, Netherlands EYE Film Museum and Switzerland Cinematheque.

Again on the same day, the festival followers get the chance to see "Spanish Dancer," a passionate love story set in 17th century Spain. Bankrupt noble Don Cesar throws a grand party at his castle before he loses all his wealth. The dancer Maritana, who reads his future at the party, sees both love and poverty and death but keeps it to herself. The love that blossoms between Don Cesar and Maritana will be tested and mainly, they will have to deal with the games the king, who wants to have Maritana, will throw at them.

Pola Negri, the enchanting star of the time and famous for her performances in Ernst Lubitsch movies, is the leading actress. It is the movie star's third movie after she arrived in Hollywood following a successful cinema career in Germany. The movie was restored in 2012 by the Netherlands EYE Movie Museum and it was determined that half the movie was missing. The movie was compiled from different formats and resources and restored according to its original script and will be meeting Istanbul movie lovers for the first time.

THE DUMB GIRL OF PORTICI
​ 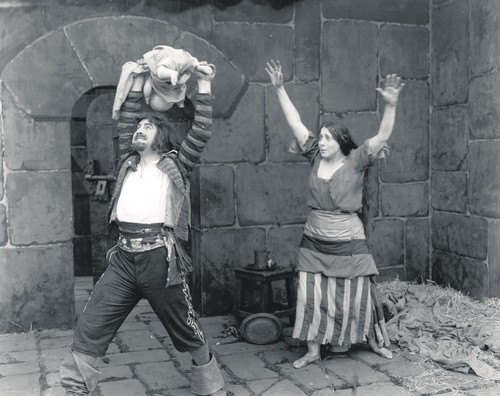 Successful director Lois Weber's collaboration with the famous ballerina and choreograph Anna Pavlova, "The Dumb Girl of Portici" focuses on Fenella, a fisher girl who lives in Napoli under the Spanish siege in the middle of the 17th century. Fenella's sister, who was seduced by a Spanish nobleman but dumped, triggers a rebellion against the Spanish occupiers. The movie, adapted from a successful opera to cinema, was not screened in certain countries, according to some resources, as authorities were afraid that it could encourage a similar rebellion. This dazzling movie created by two women who are great in their arts, Lois Weber and Anna Pavlova, is a production with the one of the highest budget of its time. Restored in 2015 from two copies, by sticking to the original script, the movie has visited many festivals and can be watched on Dec. 15.

Another movie presented by the festival on Dec. 15 is "Bestia: Polish Dancer," the oldest movie of the enchanting star Pola Negri. The movie depicts the story of a villager, poor girl, Pola, who is distressed with the unwanted attention of her boyfriend Dimitri and decides to play a game.

She gets Dimitri drunk in a hotel room, takes all his money and dumps him. She decides to go for modeling in this free life she creates for herself and starts dancing at a cabaret. When she falls in love with the rich businessmen Aleksi, she finds herself in a forbidden love which turns into a love triangle as Dimitri is after Pola for revenge.

"Bestia," which was purchased by an American distributor in the 1920s and re-arranged with small touches, was restored by Fimoteka Narodowa with 4K quality in 2017. It is believed to be the only surviving copy after the great destruction during World War II in Poland and the restoration was based on the nitrate copy at Museum of Modern Art (MOMA) in New York.

Before enjoying success in Hollywood, Erns Lubitsch directed "Die Puppe," one of his best silent movies while he was still in Germany. This extraordinary movie, deemed as one of the classics of early cinema, is adapted from E.T.A. Hoffmann's story. Young Lancelot is the only heir to his wealthy uncle yet, he does not want to marry due to his hesitant and shy nature. The baron wants to guarantee his heritage and decides to get Lancelot married. He insists on Lancelot picking his bride from among 40 young women he invites to a party. Yet Lancelot runs away to the monastery as he is scared. The priests who find out about the heritage then convinces him to marry a puppet, which breaks down right before the wedding. The movie, which can be deemed as the reflection of the industrial revolution and widespread industrialism on the imagination, is a classical movie that should not be missed.

"The Goat," an example of the master direction of Buster Keaton, is a gripping story of an escape focusing on the story of Buster, who is mistaken for a criminal. His life gets out of hand and Keaton uses his talents of manipulating the perception of time and the rhythm, reflected to the screen as an element for an absurd suspense and comedy. He uses cars, trains and his own body, to escape from different inescapable settings and turns the movie into a masterpiece of catching the rhythm of the art of cinema.

"Neighbors" tells the love story of two young people who live in neighboring houses, but their love is a forbidden one. They cannot be together because their parents object, and so the lovers send each other letters from a hole in the wall. Yet they are caught one night in a surprising way. The parents, who are enemies, take the matter to the police. The story of this couple, who have a hard time reaching a happy ending, was resembled to "Romeo and Juliet" by many critiques and appraised as a story that turned was into comedy in the hands of Keaton.

VIEWS FROM THE OTTOMAN EMPIRE

On Dec. 16, "Views from the Ottoman Empire," a documentary compiled from the images from the Bologna Cinematheque, Danish Film Institute, Italian Cinematheque Association, Library of Congress and Yugoslavia Cinematheque, has images of the siege of Edirne by the Bulgarian Army in 1913, which lasted from 1906 to 1926, Serbian King Peter's visit to Istanbul in 1910 and Sultan Mehmet Reşat's views in Üsküdar district. One of the other leading images is the fake documentary made in 1926, about by Karen Jeppe, a Danish missionary, printed as "Aleppo Shelter, 1922-1927." 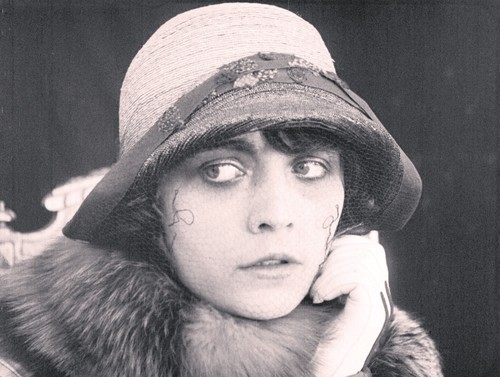 "Mania," played by Pola Negri, is about the love of a girl named Mania, who works at a tobacco factory, to the composer Hans. Selected to be on the posters printed at the factory, Maria meets Hans at the poster studio. However, the rich art baron, Morelli has his eye on her. Hans, who composes an opera for his love, gets the chance to stage his opera on the National Opera House in Berlin, but his performance does not take place as Morelli intervenes. Mania, who tries to make Morelli change his mind, soon has to obey his wishes. The opera is finally performed, yet a sad ending awaits the lovers.

The movie, which was thought to have been lost for years was discovered in 2006 and was restored with 4K technology and screened at many places all around the world. The restoration protected the striking purples and yellows of the original and has been deemed as one of the best movies in its category.

The film focuses on Gertrude Bell, a British discoverer and politician who has been compared with Lawrence of Arabia due to his influence on the Middle East. "Letters from Baghdad" is about Bell, who spent years in the geography of Arabia, before she was sent to Iraq by the British government after World War I. In this male-dominant world, she was one of the few women who left her mark in politics and was pretty knowledgeable about the history and politics of the region. The movie compiles passages from her letters, diaries and secret communications. Tilda Swinton dubs Bell's words and the images recorded at the time at the geography accompany Swinton's voice. The movie depicts moments from thousands of pages of Bell's unpublished writings. It is a documentary that is the result of a meticulous archive search.