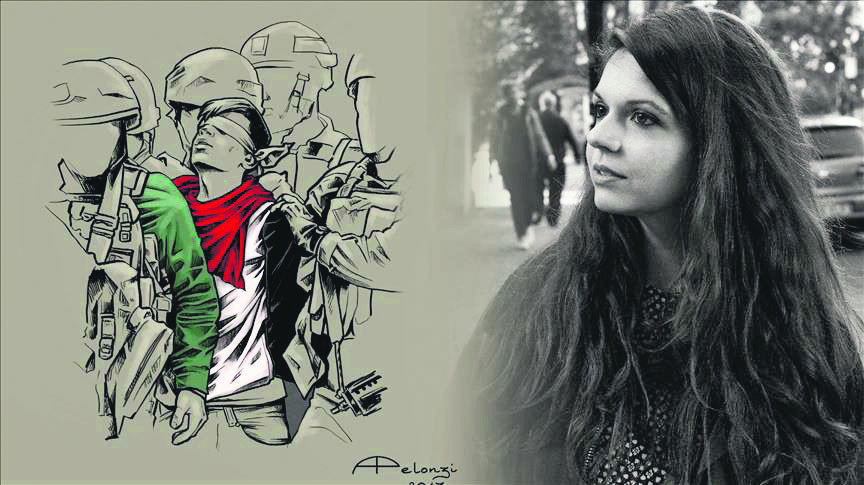 An Italian artist who recreated the photograph of a 16-year-old Palestinian boy being arrested by Israeli troops has spoken of the need to show solidarity with Palestine. The photograph of blindfolded Fawzi al-Junaidi being led away by more than a dozen heavily armed soldiers swept social media last week as users condemned Israel's use of excessive force against children.

In Alessia Pelonzi's painting, the soldiers are reduced to little more than outlines while the observer's eye is drawn to Fawzi, whose clothing and the sleeve of one soldier's uniform are painted in the colors of the Palestinian flag.

"Solidarity is the most important thing in these dark times and I believe it's one of the most powerful weapons against injustice," Pelonzi told Anadolu Agency (AA) in an email response.

She added: "The soldiers are taking the kid but you can see the Palestinian flag in the drawing anyway. It's something that can't be silenced. You can't sweep their identity as a people under the carpet."

Fawzi has been accused of throwing stones at soldiers as protests broke out against the U.S. recognition of Jerusalem as Israel's capital. The photograph was taken in the West Bank city of Hebron on Dec. 7 by Abed Al Hashlamoun.

"It impressed me so much that I decided almost immediately to draw something about it," Pelonzi said.

"I felt the need, the urgency to communicate something with my art and the first thing I thought was 'OK, I'm gonna put the Palestinian flag in the center of the picture.'"

U.S. President Donald Trump's announcement on Jerusalem was followed by unrest in which at least four Palestinians have been killed and nearly 1,800 injured.

"For me, it's very important to show that, even from abroad, we can decide to be on the right side of this tragic fight, in order to end it as soon as possible and to guarantee the Palestinians the justice they deserve," Pelonzi said.