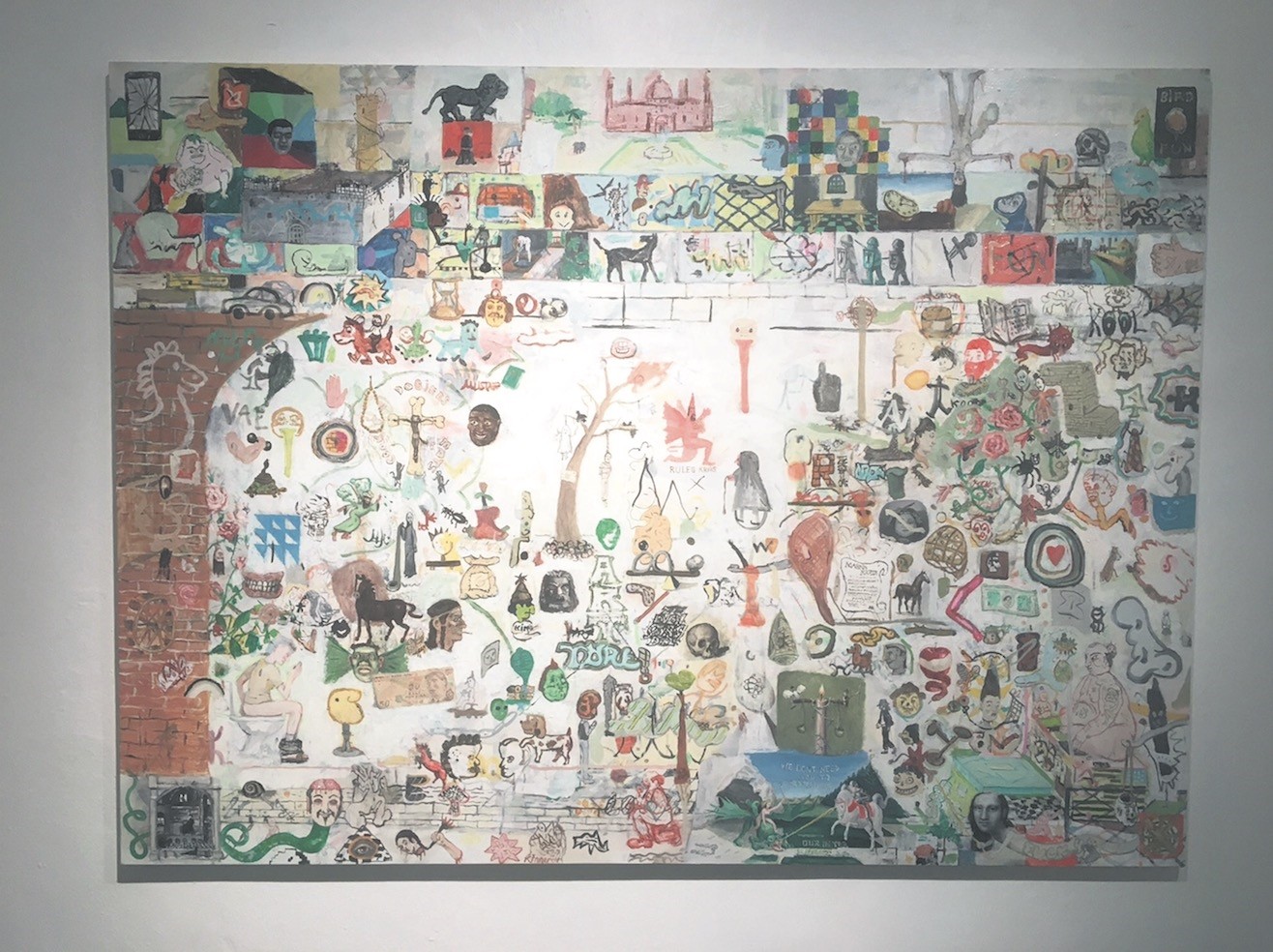 u201cMind Puzzleu201d explores everything from Salvador Dali to the ultra-personalization of the computer.
by Matt Hanson Dec 18, 2017 12:00 am

The 30-something workaholic painter, Tarık Töre, opened his anticipated first solo show at Pilot Gallery in the heart of Istanbul's trendsetting Cihangir district. In the highly urbane neighborhood driven by uninhibited youth-led consumerism, Töre expands minds with his vast canvases and unrepressed art

Comparing artists is essentially a figurative approach toward the appreciation of new and challenging exhibitions. It is a creative, literary technique to liken separate individuals who have often had little to no connection from the perspective of an outsider speaking in the logical terms of transferable knowledge. The essayistic device of the metaphor highlights artistic originality within the perceivable objectifications of the public imagination.

On the common ground of the modern city, a person alone is practically negligent, especially when they are merely as they are to themselves, unadorned without the social relationships and cultural influences that would proudly define them. When integrated into a movement, a school, an idea, even a belief, anything shared, the individual becomes known and assumes a larger-than-life character. They become symbolic, imbued with collective meaning far greater than that which they would normally ascribe to themselves. An artist is born after assimilating and ultimately transcending the past, when they conceive works that capture the utterly immediate and fleeting present. From that point, they enter the historical process by contributing to its intellectual flux. 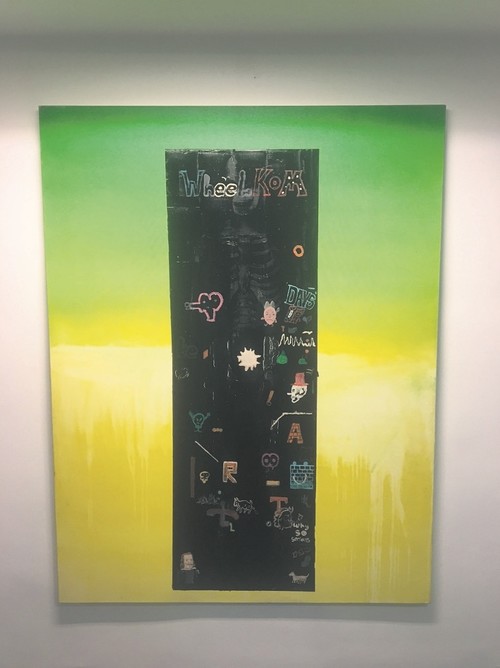 The title piece is a play on the metaphors of life and death, representation and reality.

And yet, every true artist endures a lifelong and truly universal struggle with the dual natures of authenticity and experience working in a field in which the source of inspiration is not in the least shareable, and is, as testified by many great innovators, part of an absolutely selfless process of creation. Art has the power to expand minds when it communicates lucidly, and with the vulnerable qualities of the deeply personal, through material that is at once approachable while also breaching the inner walls of emotion and reason.

The tragicomic wizardry of Tarık Töre

The paintings of Tarık Töre are simultaneously unprecedented, and neatly encompassed by a range of predecessors whose works now stand to complement his inaugural solo curation. The aesthetic variety and technical craft that he employs displays a radical mind for the charged and nebulous current where precision and revolution meet in the hand of the artist. It is a fine balance, and one that Töre executes with the tragicomic wizardry of his youthful brush. His eye is a fountain of youth, evoking tones and contrasts that are as entrancing as they are damnable.

"Whellkom" begins down the spiraling underground steps into the high-ceilinged industrial, loft office at Co-Pilot, a temporary sister space that opened in 2013 as a multi-use venue. Currently, it houses Pilot Gallery during an ongoing renovation to prevent earthquake damage. The avid and wholehearted host, assistant director Amira Arzık is a bright, amiable conversationalist who has witnessed much of the last two decades of the Istanbul art world. On display until Dec. 23, the earliest exhibited pieces by Töre are drawn from the darkest interiors of the human soul, as he titled them under his series, "Death." Overlooking the Pilot Gallery workspaces, a lone rider in neon, electric coral red glows against a moonlit silhouette of mountains. Lit from within like an x-ray, the skeleton of the man and horse is abstracted over a block, as a sculpture would stand in a town square. His subtle illuminations recall the paintings of Miles Davis as his ingenious mind issued forth in his last years through impromptu tendrils and sweeps of delineated spectrums.

Aside the macabre horseman, he emphasizes his particular talent for opaque sable black of the darkest kind against a glaringly saturated, tawny lime palette. Out of a monolithic rectangle that seems to have been transported from the set of "A Space Odyssey," there emerges the white shades of human bones, a lower spine, a ribcage, a skull. Notebook sketches appear with a seeming randomness where the skeleton disappears, his eye sockets covered over with the multicolored lettering "Whellkom" (2017) to introduce viewers to the ghastly realms of the subconscious where mortal fears take shape. 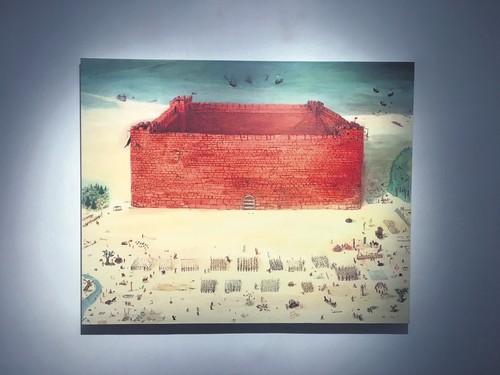 "Siege" is the most recently completed painting by Töre for his inaugural solo show at Pilot Gallery.

Downstairs into the nether regions of the exhibition space, the initial piece is made from found material, the fabric of a wedding party meant to be signed by guests. He transformed it into a conceptual remnant of punk graffiti with the simple design of construction bricks sketched over it. Arzık explained his acquired taste for street humor as the bassist for psychedelic surf-rock band Palmiyeler. In the hallway leading to the main exhibition space, the final piece from his "Death" series titled, "Passage" is a grandiose play on the opposites of the military-industrial complex in confrontation with the idyllic innocence of remote living immersed in nature. Uniformed men from varying world traditions march in an uppity column from the scarred earth of a mining project toward the riverine settlement of a peopled ecological village. Spectacularly distinct, and unforgettable in the exaction of its imagery, "Passage" has all of the antiestablishment satire of fellow Turkish painter of the previous generation, Mevlüt Akyıldız, while conveying a spiritual appetite honed with a visionary symbolism also found in the works of California painter Mark Henson.

In his stream-of-consciousness style excavated from voluminous stashes of personal notebooks, Töre conceived "Mind Puzzle" (2017) as an oil on canvas with an almost volatile detachment from the status quo. His work spells out liberation one disgusting reality at a time. While his piece lacks the single-minded compositional integrity of the most famous works by Jean-Michel Basquiat, the energy that streams through the autopoiesis of his dream logic has a stunning resemblance to the late, young master of Neo-expressionism. In the paintings of "Whellkom" there are recurring characters, changeling mutants who emerge and disappear from nuclear fallout dystopias and apocalyptic urban agglomerations like wraiths come to signal the end of the beginning. It is a picture meticulously orchestrated with motive stillness in his "The Demonstration" (2017), which revives the glory of cinematic blockbusters in an alternate future that self-destructs with the same pomp and hysteria as the present.

Töre has a keen sense of proportion and its disillusions with respect to the overwhelming ubiquity of advertisements, which regularly sell warped, rescaled images. He is in league with such iconoclastic artists as Claes Oldenburg, who raised the heights of pop-art during its early days in postwar America. "The Demonstration" cleverly reinvents the forms of language as its scrambles intellectual comprehension with the chaotic familiarity of misplaced laughter.

Every piece by Töre is another universe, an altogether distinct triumph of originality that starts from independent points of creative exploration, though with a certain artistic signature throughout as visible in his thinly penned methods. "Siege (Big Production)" (2017) was finished in the weeks prior to the opening of the show in mid-November as Töre excitedly prepared for his career-defining solo exhibition. It is a powerful revelation of open and closed space in the virtualized contexts of civilization and history. With a style and effect resembling the medieval patron saint of all contemporary visionary artists, Heironymus Bosch, the exhibition gives way to a pair of canvases that evoke the rediscovery of America, where he studied in 2014.

As seen in his utterly expansive landscapes, Töre has a critical intelligence that will develop further to join in such artistic sympathies as with the cutting insights of the Canadian First Nations painter Kent Monkman, whose socially-provocative canvases revise the art history of Manifest Destiny and its ongoing postcolonial legacy with unrelenting wit. Finally, his textured plastic centerpiece resurrects the childlike schemes of Fatih Urunç while unveiling his unique passion for free-form experimentalism.