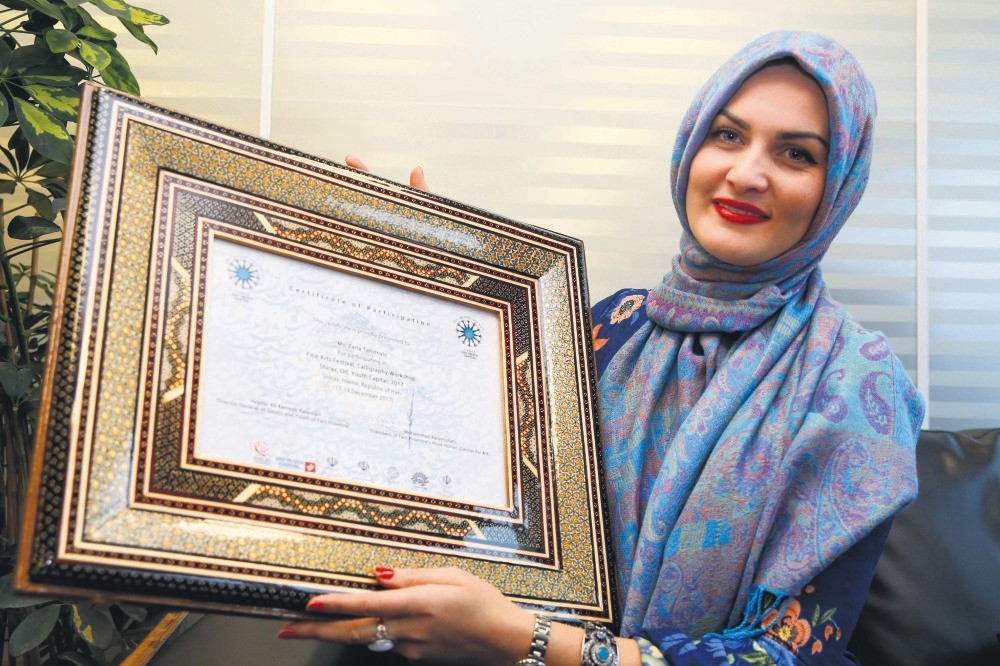 Living in Gracanica, a small town in Bosnia-Herzegovina, Zana Tahirovich, 27, who has an education in civil engineering, has been a calligrapher for nearly two-and-a-half years. She has opened five exhibitions so far and tries to introduce her work through social media. She also trains newcomers in the art of calligraphy.

Tahirovich attended workshops as part of the Shiraz Festival of Arts, which is held in Iran, and was among the four calligraphers who were granted awards. She told Anadolu Agency (AA) that she has reached thousands of people, sharing her work and information on her social media accounts.

Explaining she started calligraphy in a course in Gracanica, Tahirovich said that these courses are not very common in northern Bosnia.

"I continue to learn calligraphy. I take lessons from Munib Obradovich, who is one of the renowned calligraphers in Mostar province of Bosnia-Herzegovina. I am very proud of being trained by him as he is a prominent figure around the world. He did the calligraphy under the clock tower, which is located near the Kaaba. I also train people in calligraphy in Gracanica," she said.

"We have freehand sketching lessons in the university. Therefore, I am inclined to painting and writing. I felt close to calligraphy and fell in love with it in a sense. I describe it as love, for calligraphy means peace for me. I feel like I meditate while producing my work."

'It is pleasing to spread this art in my country'

Expressing her happiness to have an award from the festival in Shiraz, which is the youth capital of this year's Organisation of Islamic Cooperation (OIC), she said that three Bosnians and one Egyptian were also granted awards at the festival.

Explaining she wants to specialize in calligraphy, Tahirovich said: "I want to make new calligraphy and open new exhibitions. I also hope to continue training people in calligraphy and make them love this art. When I first started with it, a few people knew it. I recognized people are closely interested in calligraphy with my Facebook page. People ask a lot of questions about the art. When people see what I do, they also want to write like me. It is pleasing to spread this art in my country."

She said that calligraphy was once prevalent in Bosnia but it was forgotten over time. Tahirovich added: "We see ourselves as connected to Turkey because we have a mutual history going back to old times. We love Turkey, and Turkish people are our brothers. There are calligraphers who became famous in Bosnia during the Ottoman period. Therefore, our primary aim is to enliven this art again in Bosnia." Having come to Turkey for the first time and visiting Istanbul, Tahrovich also mentioned how mesmerizing the city is.