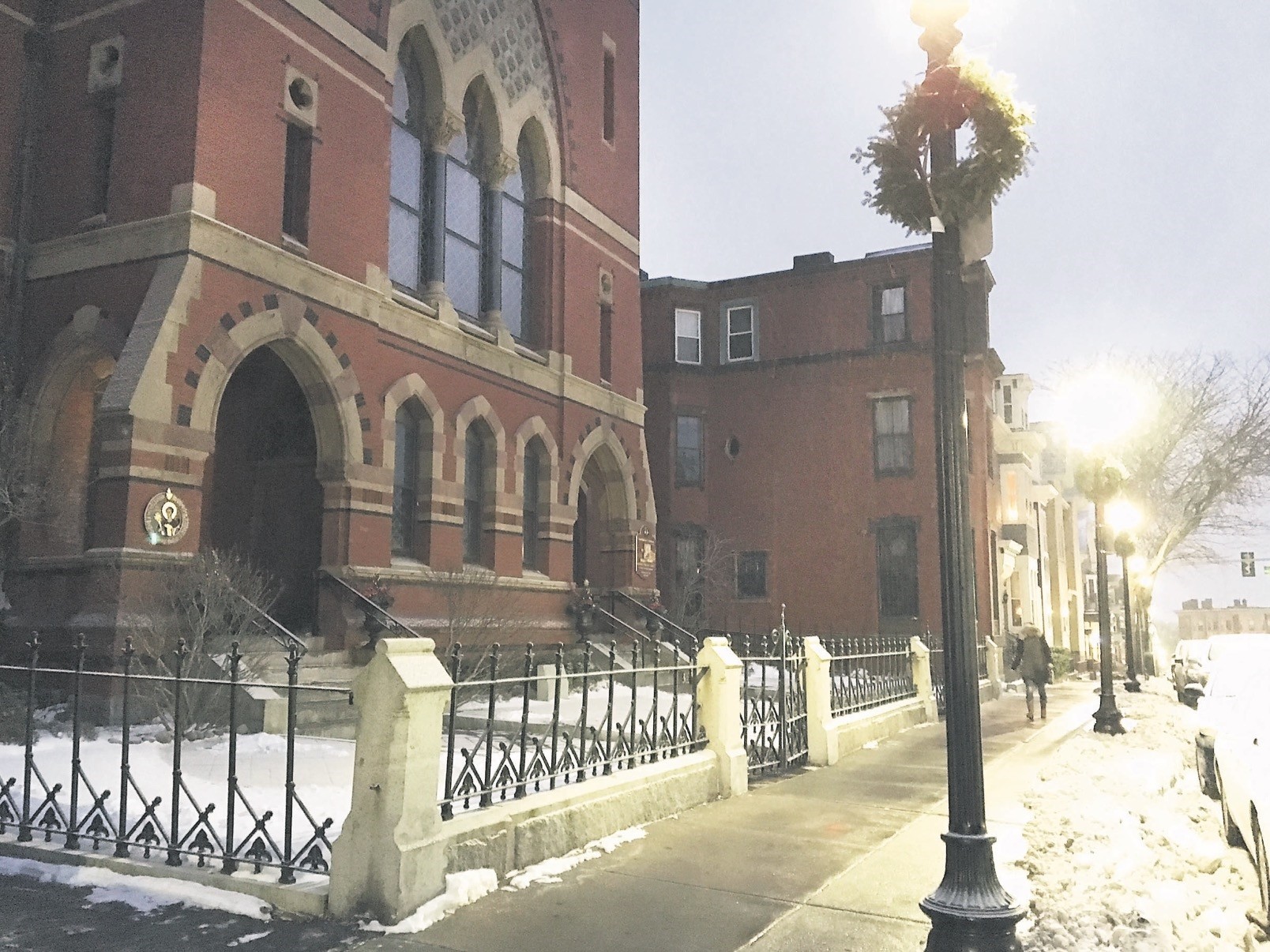 A seminal figure in the nascent Albanian nationalist movement, polymath Fan S. Noli built up the strength of the movement in the U.S., where he also established the Albanian Orthodox Church

On the Sunday morning of New Year's Eve, as an extraordinary cold snap worsened the infamous New England winter, with snow and ice piling high along the streets of South Boston, a young American man from southeastern Massachusetts walked into the Albanian Orthodox Cathedral of St. George. Inside, a tall, elder held out his hand, welcoming with the question, "Shqip?" to identify the newcomer (as the word "Shqiperi" means Albanian).

Through the foyer, photos and clippings from the old country were interspersed along the walls of the late 19th century High Victorian Gothic interior. Led through the cathedral doors by a gently smiling, soft-spoken man with broken English, a chorus of three sang over the solemn notes of the organ to enunciate the cryptic and melancholic tones deeply influenced by the Gregorian chants of the Byzantine civilization that once sprawled from the Iberian Peninsula to Upper Egypt and the Black Sea.

Father Arthur Liolin emerged from the multi-paneled, wooden facade, enacting traditional rites of devotion before standing at a podium to address the sparsely-peopled pews. Raising his voice ever so lightly, he led prayers in English and Albanian, an act of historic significance with respect to the early 20th century awakening of Albanian religious, national, and intellectual identities into modernity following the dissolution of Ottoman Balkan territories. Adorned in immaculate, gold-pleated robes dyed in fulvous, solar hues, Father Liolin spoke of the lack of extant scriptural knowledge regarding the actual verifiable date of the Nativity, and that it was even forbidden to celebrate Christ's birth as Dec. 25 in 17th century Massachusetts when the colony was ruled by English Puritans, popularly called the Pilgrims.

He then stepped down to call up the one expected guest from the congregation, presenting him as a journalist who had been drawn to the Cathedral while working in Turkey, and who returned to America seeking knowledge of the iconic leader of the nascent Albanian nationalist movement who he knew from his readings as Fan Noli, the founder of the Albanian Orthodox Church. In that brief passage of words through the sacred space buttressed with elegant wooden beams upholding the lofty architectural round, the young writer moved the hearts of his fellow Americans also born of the immigrant dream that too often still sends the most vulnerable people in the world sleepwalking in the dark only to grasp for imagined ideals and groundless aspirations. The director of the Fan S. Noli Library, Archive and Cultural Center heard the distinguished visitor with intrigue. Beaming with a proud intellect and conveying her genuine warmth, she introduced herself as Neka Doko.

Modestly housed on the second floor of the building next to the Cathedral, the rarefied archival library that Ms. Doko sustains opens its doors into a windowed office overlooking the seasonal dramas and local colors of Greater Boston's slowly gentrifying, peripheral district. Around the corner, a sister Albanian Orthodox Church named after St. John the Baptist burned down in 2013, destroying priceless murals and breaking the heart of the community. Its lot remains under construction while some maps and directories continue to list the former address. For outsiders looking in, even the slightest exposure to the immense wealth of intellectual heritage stored at the Fan S. Noli Library requires a series of personal encounters driven by a studious, and persistent curiosity.

Ms. Doko, who also bears the title of Intercultural Mediator, is a passionate and ambitious multilingual archivist. By appointment, she leads the way invitingly, and with a kindred, inquisitive charm, especially for those sharing her chief affinity, to appreciate the contemporary significance of the man who led the Albanian nationalist movement with the nonviolent power of his peerless, creative intelligence. Her enthusiasm for the legacy left by Fan S. Noli is palpable, as she converses buoyantly to express the great importance of one individual who orchestrated both the reformation of Eastern Orthodox Christianity and the nationalization of secular Albanian culture into the modern, post-imperial era with his towering and prescient intellectual humanism.

As a resident of the Boston area for the past decade, and with family history descending from the Pashalik of Berat, she preserves a stunning collection of first edition books by Noli printed in the earliest decades of the 20th century. Among his initial literary works are Byzantine hymnals that he translated from scriptural Greek into Albanian, representing the unprecedented entry of his mother tongue into the communal liturgy of the Orthodox faith. His translations went beyond religious texts, as he brought Omar Khayyám, Don Quixote, Shakespeare and others into the fold of an ingenious linguistic revival. And more, Noli was a prolific writer of original verse and prose, advancing the very language of his nation into the epochal shifts of modernity as individual style increasingly defined the new cartographies of cultural solidarity.

Even in English translation, such as is best known in the work of Robert Elsie from his exhaustive American collection, "Albumi" published in his later years in 1948, his poems voice exile and the homeland with a fine historic awareness, stylized as robust calls to action as he names from the movement and invokes the classical heroism of antiquity, often against settings rich with the ecologies that source his nationalist sentiments. Noli was dedicated to the academy at least as much as he was to the church. As a graduate of Harvard, the New England Conservatory of Music and Boston University, he wrote with special authoritative effectiveness on Skanderbeg, the national hero of Albania. In his book, "Beethoven and the French Revolution" published in 1947 by the International Universities Press of New York City, he wrote an inscription to his father, Stylian George Noli, to honor him as his first music teacher and for serving as the cantor of the Albanian Village Church in his native Ibriktepe.

That Noli furthered the scholarship and production of literature and music together in his intellectual efforts is crucial to understanding his success in leading the formative and scattered Albanian nation as a united people into the modern era. According to a 2010 study published by Father Foti Tsitsi, who entered the Antiochian Orthodox clergy of Australasia in 2013, Noli crystallized his compositional ear for Byzantine music in Egypt, a talent that he had developed since childhood steeped in the Orthodox Greek traditions of his father. As equally attested by Ms. Doko from her extended conversational monologues of biographical insight, Noli looked to America while immersed in the highly educated, urbane Albanian diaspora in Alexandria. It was not until he was 31 years old in 1913, the year after Albania declared independence from the Ottoman Empire, when Noli finally saw the national territory that his people would claim as a homeland for the modern age.

He spoke at the Albanian Congress of Trieste alongside his partner and sometimes-rival Faik Konitza who was from the Ottoman province of Ioannina, a place of learning that raised many early nationalist Albanian intellectuals, such as Naim Frashëri who had developed the Albanian National Awakening into a literary movement by the late 19th century. Konitza formed the Vatra Federation with Noli into the most powerful Albanian organization in America, eventually editing Dielli, the oldest Albanian-American newspaper that Noli founded. And ultimately, it was Noli who arranged what was arguably the single-most important act for Albanian nationalism, that being acceptance into the League of Nations in 1920. In Boston, where Noli laid the foundation, Ms. Doko is enlightening the mass influence of his voluminous letters into a renewed community labor of love.