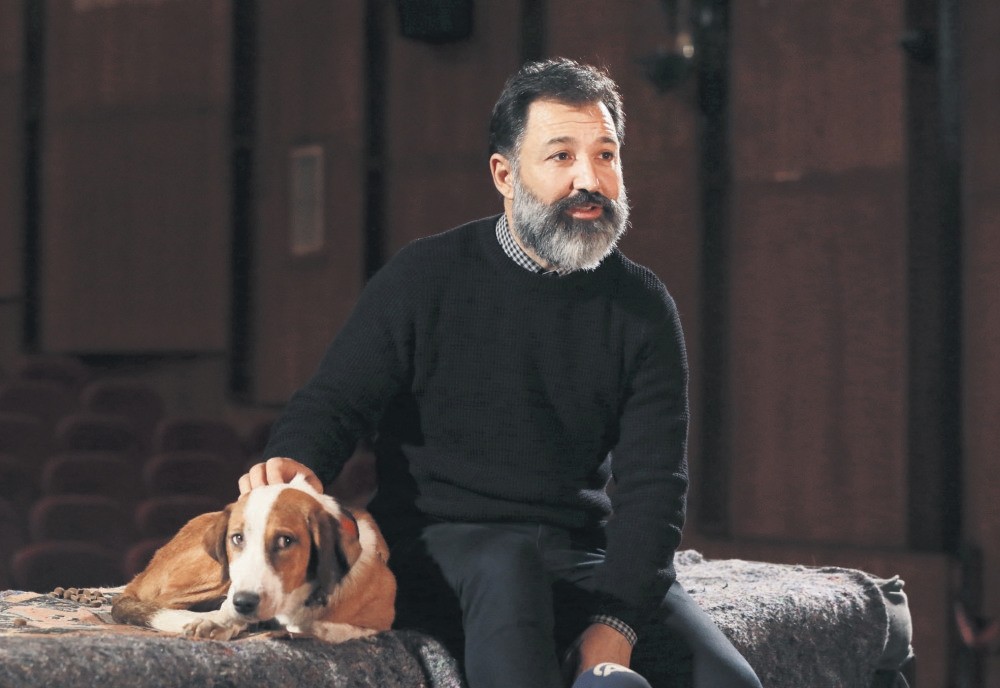 Starting a new life in the City Theaters after a stay in an animal shelter, Boncuk took a role in the play ,Of Mice and Men.,
by Anadolu Agency Jan 10, 2018 12:00 am

A dog named Boncuk adopted from an animal shelter by the Kocaeli Metropolitan Municipality has taken the stage with the role of "Dolores" in the famous play "Of Mice and Men."

After being found by the Kocaeli Metropolitan Municipality's Temporary Care Center for Street Animals, the dog was adopted by the City Theaters after receiving care.

Starting a new life in the City Theaters, Boncuk took a role in the play of John Steinbeck's "Of Mice and Men," which was translated into Turkish by Zeynep Avcı.

City Theaters Executive Editor Fatih Sevdi told Anadolu Agency (AA) that the dog who was originally set to take part in the play had to be changed.

It was then that they decided to adopt a dog from the animal shelter. Sevdi continued, "It would be good both for this dog and us. Since the day she came here, she enlivened our atmosphere. She was weak during the first days. Actually, street dogs or dogs adopted from an animal shelter can have trauma. Therefore, our interest and attention were really good for her. She's an affable animal."

Remarking that Boncuk has appeared onstage for a total of nine times up until now, Sevdi added that she stays onstage for nearly 30 minutes.

"We call her 'Dolores' in the play. She has a dramatic end. The people on the farm don't want her and they want her to be shot because she is sick. After her owner is convinced, Dolores dies. Boncuk doesn't have an owner here. We didn't adopt her as if she is our friend. She is our actor," said Sevdi.

'We don't have any problems in rehearsals'

"Boncuk was very uneasy in the beginning but this reflected positively in the play. Her role is a sick dog and this uneasiness completed the role. Therefore, we didn't have any problems. She is a really smart and perceptive animal. When she hears the announcement telling the actors to take their place for the play, she puts her paws on the mark. If you put an animal onstage, no matter how successful you are, the animal will get the attention. She became the leading figure in the play from the moment she appeared onstage. Everybody is curious about her. We, as actors, try to imitate our surroundings, but Boncuk is natural herself. The audience loves her as she doesn't have to imitate anything or anyone. We plan to give her different roles since she is an actor from now on."

Theater artist Yaşar Özveri, who is Boncuk's owner in the play, also added, "Boncuk is like my own dog. She is really old but we get on well with each other and share the stage."