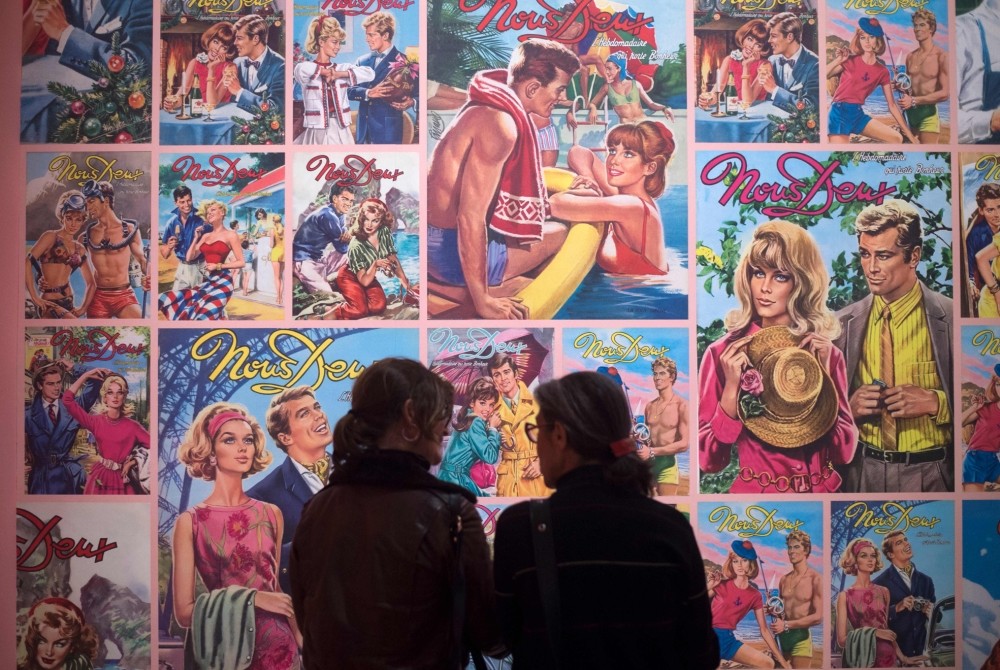 What do Sophia Loren, John Cleese and Woody Allen all have in common?

They all began their careers in the oft-derided world of photo comics or photo novels.

The genre, infamous for stilted story lines and sugary romantic melodramas, is finally getting its day in the spotlight in a major museum retrospective in France.

The lingering kisses and frozen horrified looks that were the bread and butter of photo comic stories now seem irredeemably kitsch.

lions even after the dawn of television, sparking moral panic and condemnation from the pope and communist leaders.

Well into the 1960s, one in three French people were avid readers, according to the curators of the "Roman-Photo" exhibition at the Mucem museum in Marseille, which claims to be the first definitive look at a genre "that has rarely attracted the attention of historians."

Indeed many of the people who created photo comics were so scornful of them that they left very little behind for posterity.

Yet, "photo novels were one of the biggest pop cultural successes of the 20th century," said co-curator Frederique Deschamps. "Modern fairy tales filled with cars, fridges, record players and other objects that symbolize modernity, romance and desire."

From their birth in Italy in 1947, photo comics reflected changing moral values and fed the slow rise of feminism with stories about touchy and taboo subjects like "divorce, abortion and women's rights at work," said her co-curator Marie-Charlotte Calafat.

"They do not deserve their retrograde reputation at all," she added. "It's the reverse actually."

Instead they were real barometers of the "aspirations of society with story lines where women questioned their place," Calafat insisted.

So much so that even the reforming Pope John XXIII denounced them in 1959, prompting one liberal Catholic weekly to call them "the opium of the female masses."

A lobby group made up of French communists, Christian intellectuals and some feminists also famously branded them "infantile magazines that undermine morality and break up families."

Eventually though even the church gave in and began using photo novels to recount the lives of the saints.

The genre soon spawned imitators in Britain and the U.S., where the satirical magazine Help! called on the budding comic and acting talents of Woody Allen, John

Photo comics were also featured in National Lampoon as "photo funnies," with Americans borrowing the Italian word "fumetti" for the genre, meaning speech bubble, literally a "little puff of smoke."

But as the 1960s wore on and TV became increasingly dominant, sales began to wane, pushing publishers to ape Hollywood.

A large part of the Marseille show is dedicated to Killing, a sadistic Italian photo comic character who stole from other criminals and took particular pleasure in torturing scantily clad women.

The French version of the series, Satanik, was banned after 19 issues in 1967, but the brutal anti-hero, who wore a skeleton costume, spawned a bootleg Turkish version called Kilink that was featured in several cult films, borrowing liberally from French and Italian pulp movies "Fantomas" and "Kriminal."

Putting the exhibition together, however, was not an easy task.

Curator Deschamps said she began her interest in the genre after finding a stack of the French magazine Nous Deux (Us Two) in the trash.

As she dug deeper into the subject, she discovered that the originals of most of the massively selling magazines had also been confined to the dustbins of history, leaving researchers with little to go on.

Without chancing upon thousands of negatives of original photos in the archives of the Mondadori publishing house in Milan, she said they would not have been able to stage the show.