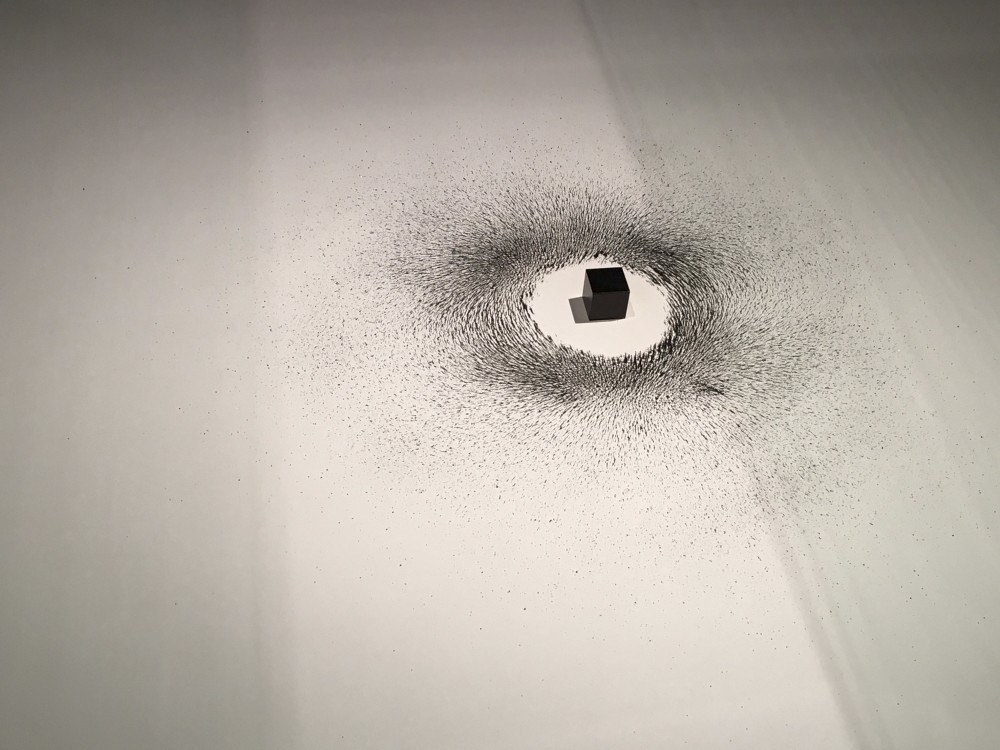 u201cMagnetismu201d (2012), a sculptural work by Ahmed Mater, was inspired by the words his grandfather that conveyed the spiritual allure of the holy site of Kaaba.
by Matt Hanson Jan 12, 2018 12:00 am

Uphill from the Grand Army Plaza archway monument to America's Civil War, beyond the Ancient Egyptian motifs of the Brooklyn Public Library, beside the turn-of-the-century airs of the Brooklyn Botanical Garden and Prospect Park, the Beaux-Arts façade of the Brooklyn Museum elevates New York City's darling borough to a global city all its own, and inside, the ‘Mecca Journeys' exhibit by Saudi artist Ahmed Mater reflects on the place where metaphor confronts reality

The transliterated Arabic name for Makkah entered popular English usage as a secular place where people generally accumulate in great numbers by the year 1843, a decade before Sir Richard Francis Burton disguised himself as a Muslim pilgrim and became one of a handful of outsiders to ever see the holiest city in Islam. Although Christian, he went twice to finally bear witness to the sacred Kaaba. His book, "A Personal Narrative of a Pilgrimage to Al-Madinah and Meccah" was a Victorian sensation and remains a classic.

In 1680, when Joseph Pitts became the first Englishman to perform Hajj, he was by then a forcibly converted slave to Algerian pirates. His highly poetic and finely observed account is remarkably sunnier, as he won his freedom in Makkah. In the eyes and footsteps of Orientalist historians, the allure of the forbidden reigns in the heart of the professedly advanced, postmodern West as it is continually driven by the spoils of its unsurpassed geopolitical reach. When such narratives are retold from the source, through mixed media, and especially by locals from within the foreign cultures that are fantasized to perennial intrigue, opposites shift. The unfamiliar becomes familiar, and the ordinary is suddenly and abruptly unrecognizable. 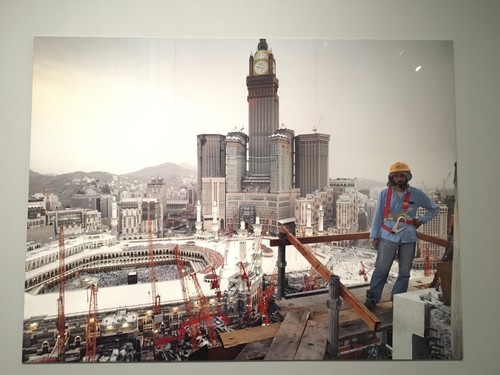 A dye-sublimation print by Ahmet Mater titled "Jibreel" (2012-2017) after the construction worker standing atop the highest minaret of the Grand Mosque.

By the 1980s, the Saudi government replaced the official Latinized spelling of Mecca to Makkah in reference to its full title, Makkah al-Mukarramah meaning "Makkah the Honored" over controversies surrounding inappropriate use. For his exhibition at the Brooklyn Museum, "Mecca Journeys," the Saudi artist Ahmed Mater returned to one of the earliest place names of the city with his book "Desert of Pharan: Unofficial Histories Behind the Mass Expansion of Mecca," a collection of over 500 photographs, along with writings and interviews. Presented exclusively for perusal in the exhibition space at the museum, the thick publication inspired the prodigious curation of photography, video and sculpture that he produced for nearly the past decade. With his historic designation, he recovers an ancient Semitic term from the Old Testament for the mountain wilderness of Makkah.

Mater begins with a hadith, a saying from Prophet Muhammad, and one that is frequently memorized by Muslims and scholars, though not for its spiritual munificence, but for the harsh truth of its foresight. It reads, as translated: "You will see the barefooted, scantily-clothed, destitute shepherds competing in constructing tall buildings." That is essentially the pith of his "Mecca Journeys," a multifaceted and magnified, reflexive perspective on the distended modernization of the utterly earth-bound holy city from the ground up to the crescent moon. Advancing through the snow-swept colonnade of pillars under the immense glorification of its Beaux-Arts architecture, the Brooklyn Museum is a spacious labyrinth of masterworks befitting its world-class stature. On the fourth floor, the works of Mater are displayed with expansive lucidity under high ceilings and atrium balustrades a short walk from the animal mummies of the Pharaohs and the first epic of feminist artwork by Judy Chicago.

In terse descriptions excerpted from the "Desert of Pharan" and curated next to each oversized print conveying the gargantuan scales of his subjects, Mater writes thoughtful and heartfelt prose, often drawing from his childhood memories and family stories. Makkah is home to an altogether unique composite of globalized humanity. 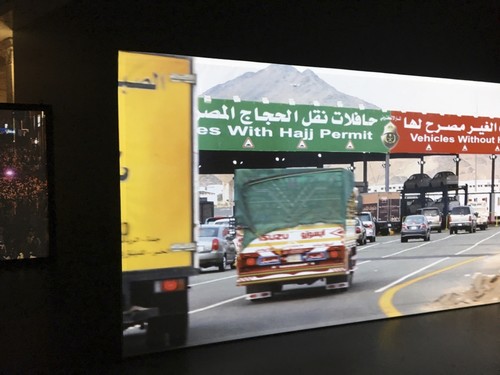 "The Road to Mecca I" shows roadway checkpoints that separate pilgrims from travelers and locals.

It has ever been a crossroads, forming bridges and sometimes walls between contested geographies, while serving as the epicenter that preserves a major alternative to the diversely kept ages, calendars and records of historically defined cultures. By traveling, which to many in Makkah means pilgrimage, a greater understanding of epochal time is clearly revealed in relation to place. Mater writes, "The symbolic city is replacing the real city," with the introductory photo to the exhibit, a chromogenic print titled, "Foundation for the New Tower" (2015/2017), considering the massive influx of new refugees, immigrants, workers, tourists and businessmen who have endured the audacious urbanization that he has seen materialize within his lifetime.

"Mecca Journeys" is not necessarily about the Makkah of Islam as much as it is about the daily transformation of its superficies and near-total unearthing. Many of his foregrounds are stunning portraits, spotlighting the faces of the men who work literally on the edge of the other side of high-rise building contracts and real estate investiture. Post-immigrant America, the rise and fall of Communism, international refugee crises and the global financial infrastructure detail the value and consequence of human movement as politicized and priced down to the individual.

Contrary to the prevalence of secondhand opinion on matters concerning Islamic civilization, Makkah is not immune to modernity despite its sanctions against non-Muslim travel, a fact that Mater addresses with a powerful gaze in his two-channel videos "Road to Mecca I & II" (2017) captivatingly interwoven with pre-modern scenes from the city before swaying camels and slow caravans were replaced with stuffed minivans and jammed highways.

In his artist statement, Mater explains with authoritative insight how Makkah is in many ways no different than any other global city. It is only its special historical and religious symbolism that sets it apart. In between demolitions and constructions, "Mecca Journeys" captures and unravels the historical process towards an illumination of its truly timeless nucleus that continually receives the highest dedications to spiritual meaning for some 1.5 billion people. Educated in the holistic disciplines of community medicine, Mater boils down his critical, artistic observations to one word: denial. Makkah is not only the destination for pilgrims. It is an inhabited, modern city. From that subtle, though basic point, "Mecca Journeys" speaks through the eyes of local residents and generations of pilgrims as they watch the lives and histories they have made disappear in the blink of a signature.

Raised in Abha near the Yemeni border, Mater first pilgrimed to Makkah as a child and later returned as an adult while practicing medicine and art, as he searched for a means to harmonize his callings. He found what he was looking for on the road from Jeddah to Makkah, where he has since evoked his firsthand knowledge with the fine skill of his camera as he muses on the nature of pilgrimage. The timeworn philosophical maxim that emphasizes the importance of the journey over the destination is often attributed to the American essayist and Transcendentalist thinker Ralph Waldo Emerson, who was notably influenced by Islamic literature. While the means of transportation to Makkah once changed for pilgrims in the past, current economic and technological paradigm shifts in Saudi Arabia are redefining the core experience of arrival that every faithful Muslim seeks for soul fulfillment.

"The Road to Mecca I" loops to thrash metal as billboards fly by McDonalds and checkpoints differentiating Muslims from non-Muslims, all shot through the blurred and constant lens of Mater who films from roadways increasingly packed with traffic. By night, on "The Road to Mecca II" police lights oscillate drowned in a shoulder-to-shoulder mass march swelling beyond the frame to the jarring, primal music of Arabian folk drummers. Downwind through the museum hall studded with the majestic vistas of the Royal Clock Tower complex overlooking the Kaaba and the Grand Mosque, a piece made with a pair of magnets and iron fillings is titled "Magnetism" (2012) as the first of two sculptural works from "Mecca Journeys." Its visceral metaphor depicts the allure of the Kaaba as a spiritual place in the eye of the storm of the world.