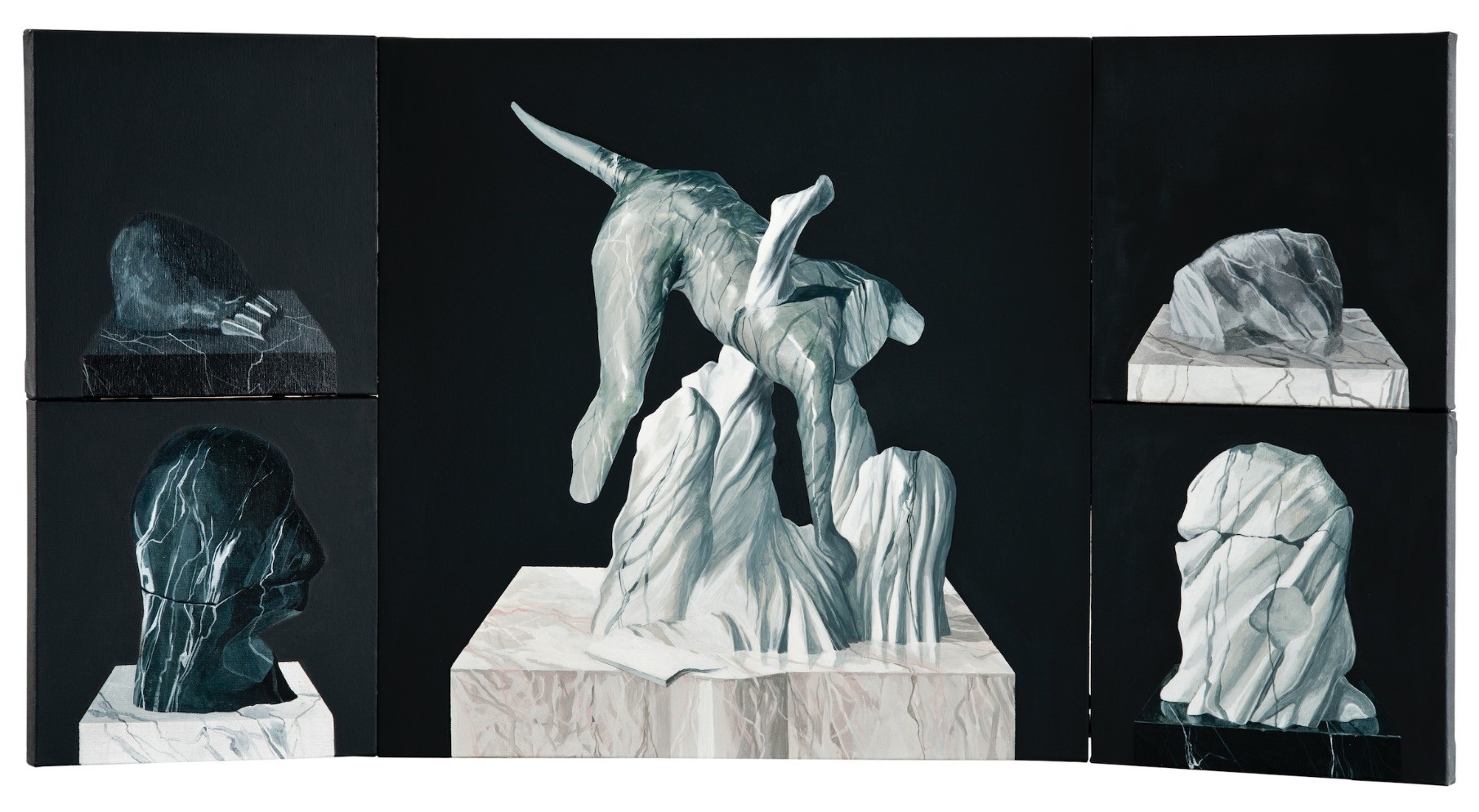 A wood panel welcomes visitors to "Chromophobia," Tayfun Gülnar's unsettling new exhibition at Gallery x-ist. "Invasion I," a triptych from 2016, at first appears like an innocent depiction of numerous cactuses. But on closer inspection, snakes and shadowy human faces appear in their midst. This image of a garden of good and evil instructs viewers to be on their guard from the outset.

"A cell's characteristics of being slightly stained or not being stained at all or its state of resistance to being stained." This is how the show's title is described by the gallery. But chromophobia also means an aversion to color and "disgust of certain colors in particular." It may surprise some to witness such aversion to color from an artist who will turn 26 this year. 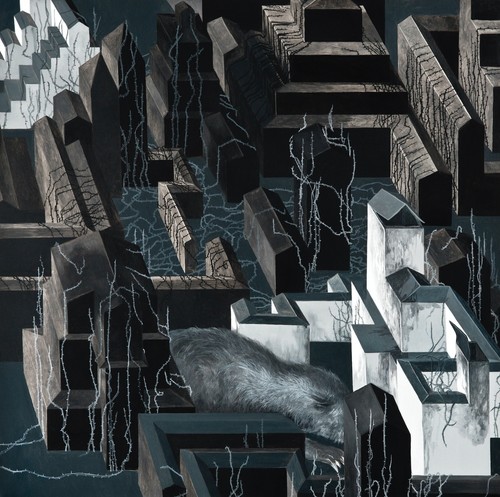 But the fascination with monochromes and with strong contrasts between black and white has defined Gülnar's work for a long time. A graduate of Mimar Sinan Fine Arts University's painting department, he takes obvious joy from working in the manner of classical painters. Triptychs, wooden panels and depictions of hellish scenes all suggest a love of sixteenth century art in general and the works of Pieter Brueghel the Younger in particular.

"My affinity with Brueghel is limited to our shared interest in producing visual spaces that depict social life," Gülnar said in an interview last week. "In my 'Eternal Cycle V,' I considered social life in a multi-layered, multi-national way that went beyond class divisions in the widest perspective I could manage."

That work, another triptych, shows armies of men and women, in various states of agony, frustration and annihilation. A man emerges from the sea and walks toward the chaos; sphinxlike figures, reptiles, skeletons and sea creatures, await him in the foreground. The image is meticulously imagined, but still seems to verge on kitsch. It has traces of political art of the 1970s; its hackneyed focus on man's mythological beginnings leaves a bad taste, but still the energy of the image refuses to let go of the viewer.

"Those creatures that seem to come out of hell in fact constitute layers of Chromophobia," Gülnar said. 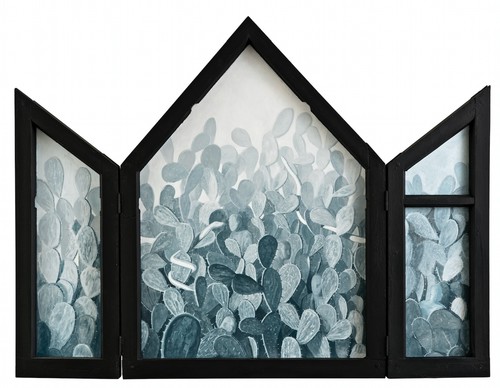 "Most religions have attributed evil qualities to animals and especially to reptiles. We are conditioned to consider reptiles as punished beings and asked to feel disgust towards ugly creatures. But in my work, reptiles show anatomic qualities that are specific to humans. And so they appear as human-reptiles. One aim of this exhibition was to make viewers face that sense of disgust we are accustomed to feel toward differences."

Gülnar was inspired by Romanian philosopher Emile Cioran's equation of human history with the history of evil. "Our species is busy destroying things," he said. "Our history is populated by those who step on the weak to arrive at positions of power. The 'Eternal Cycle' series repeats this history of violence by liberating it from history."

In the past four years, Gülnar showed his works in numerous group exhibitions, including "Art Small 3" and "Young Generation 3" at KAV Young Art (2014), "Tripart 15" at KAV Young Art (2015), "Witnesses" at REM Art Space (2015), "Spheres" at Chottomatte Gallery (2015) and "New Generation II" at EKAV Art Gallery (2016). Again in 2016, he participated in Contemporary Istanbul before focusing on his first solo exhibition.

Gülnar says he began to work on the exhibition in 2014 when he focused on creating a pool of visuals to use later in his works.

"For me, a visual is very precious in all the meanings it conveys, but it is first of all a concept that I use in relation to the story I tell. I can define my work as a sort of conceptual painting. In preparation for the show, I painted numerous works, and I began to evaluate my affinities in life and the limits of my connection with the world through them." Gülnar says a lack self-awareness of our responsibility leads to social decay. "The closer we get to violence, the further we move from comprehending what is going on."

Gülnar read widely about colonialism, patriarchal violence and the history of wars. "In my paintings you can see a wide range of examples of patriarchal violence," he said. These are caused, according to Gülnar, by control mechanisms devised by men.

Works in the exhibition consist of three cycles of paintings all produced in 2016 and 2017, and yet they attest to a thoroughgoing interest in the failures of civilization. "In the beginning of the 2000s, when I was 10 years old, I used to live in a house in Fatih. On telly, I watched the U.S. invasion of Iraq; images of bombs dropping on Iraqis frustrated me as a young kid. Watching the violence from the telly made no sense. But I still remember the nocturnal flashes of those bombs, and I think that points to the essential failure of our modern civilization."

In his essay "Three Fragments on Chromophobia," İlker Cihan Biner points to how "the internal organizations of the series of works 'Invasion Series,' 'Eternal Cycle Series,' 'Demolish Series' and 'Fragments' reveal the topology of neoliberal violence. Gülnar makes these criticisms by creating an aesthetic analogy specific to himself. While the 'Eternal Cycle Series' deals with the sacrifice rituals practiced in the social extent, the 'Invasion Series' depicts civilization's domination over nature. ... Aesthetic analogy is neither codified neither does it consist of similarities. It rather brings drawings and colors to the level of language and turns a possible amount of works into sound, rhythm or various linguistic signs. The drawings that the artist creates by handicraft and the limited weight of colors in his works tell us some things about his analogy, since the works turn into a language at the level of a scream."

Gülnar characterizes his paintings as bloodless veins. "They are rivers that no longer flow," he said. "A lack of oxygen dominates all my paintings, and that is caused by our thirst for over consumption. There are numerous animals in my paintings that had been used in animal testing. I look at the violence that grows with our fear for individuals and nations that are different than us."

This is a point emphasized also by Biner who underlines the artist's struggle for "picking up the arrow of history and throwing it further forward. The whole of the series, which we might call as the dark images of the chaotic world, is looking inside the eye of the monster and rising against the suffocating world."

In "City Labyrinth Cemetery," Gülnar's focus is on urban life. The painting offers a slice of a city ruled by an endless thirst for consumption.

Gülnar describes himself as a witness of his age. "My works are inspired by our geography," he said. "I transfer my impressions on canvases where I design the entirety of the world we inhabit."