‘The Crossing:' Migrant crisis with a sci-fi twist 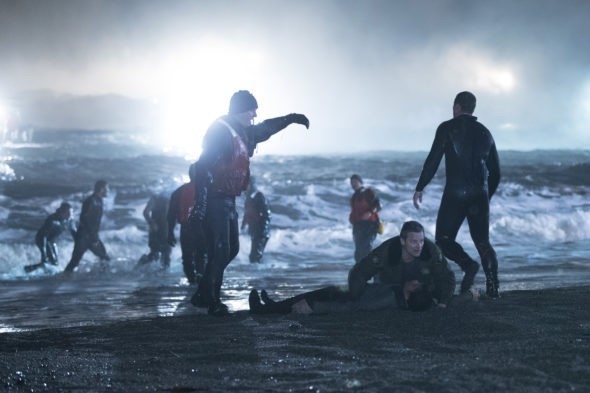 Television images of bodies floating near the shores of small seaside towns have been a familiar but chilling staple of the European migrant crisis in recent years.

But what if the refugees on our screens were fleeing not some distant continent but rather a terrible war in their own country's future?

That is the premise of "The Crossing," ABC's high-concept sci-fi drama series written and executive produced by hit partnership Dan Dworkin and Jay Beattie of "Criminal Minds," and "Revenge."

The show follows mystery migrants who start showing up to seek asylum in a modern-day fishing town in the U.S.

The survivors - just 47 from 500 who made the trip- claim to have escaped a horrifying war 250 years in the future. But circumstances threaten to kick off the war in 2018 instead.

"This is still a peaceful time, relative to history, and where these people are from, they look back on this as being a hopeful place," Dworkin told journalists at the recent Television Critics Association winter press tour in Pasadena, California.

"They get here, it gets complicated and they realize maybe it's not quite as hopeful as they thought."

Steve Zahn ("Dallas Buyers Club," "War for the Planet of the Apes") plays Jude Miller, the local sheriff with a past who teams up with a federal agent and a mother in search of her missing refugee daughter.

Most recently a series regular in Amazon's "Mad Dogs," Zahn was on a self-imposed hiatus, reading scripts that didn't particularly inspire him, when the part came in.

"I was sitting, not working, for a considerable amount of time - in my underwear for a year, reading scripts - and I read this script and I was really blown away by it," the 50-year-old said.

The idea for the show came from a Pulitzer prize-winning photograph of Iraqi Laith Majid as he landed on the Greek island of Kos with his wife and four young children in 2015.

The picture, remarkable for the agony and relief etched in Majid's face, became a symbol of the perils refugees face on their journey across the Mediterranean.

"I watched this guy holding his kids after making this water crossing and I was like, ‘Boom, Jay - let's talk about refugees, let's do something.' So we had the germ of the idea from that," recalled Dworkin.

"And then we married it with [our] love of sci-fi and writers like Richard Matheson, Harlan Ellison and Ray Bradbury. These guys have all written really interesting sci-fi and specifically time travel."

While its inspiration was very real, the creators are keen to point out that "The Crossing" is not a direct comment on the West's handling of the migrant crisis.

"It wasn't our desire to be directly critical of what's going on. We want to explore the conversation. It's there for you to read into it, but sci-fi gives us that distance to tell our story," Beattie said.

Dworkin added that while the show may posit a dystopian future, many of the experts he and Beattie spoke to were "weirdly positive" about what lies in store for humanity.

"And these guys - the guys who really know, the scientists who study this stuff and craft solutions - are positive. That made us hopeful. It might not be reflected in the show so much but personally it was interesting, it was refreshing."

Season one, which runs on Mondays from April 2, consists of 10 episodes plus the pilot.

Critics voiced concerns over ABC's track record for pulling the plug prematurely on genre dramas such as "Resurrection," which aired two seasons, and "Prey," which lasted just one.

The season finale, Dworkin said, would give viewers a whole host of reasons to come back for season two.