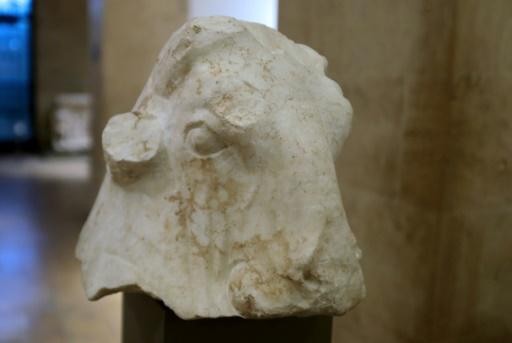 Lebanon's national museum on Friday unveiled five ancient sculptures, including a Phoenician bull's head returned by the United States, which were looted during the civil war.

The life-size fourth century B.C. white marble bull's head, the star artifact among the works that were all looted in 1981, had been loaned to New York's Metropolitan Museum of Art (Met).

The five pieces were discovered on the Phoenician site of Eshmun, near the southern port city of Sidon, during excavations carried out in the 1960s and 1970s.

"We are committed, as much as we can, to repatriating pieces stolen during the war," Lebanese Culture Minister Ghattas Khoury said during a ceremony at the National Museum of Beirut.

The five statues were stolen from a storeroom in Byblos and later surfaced "on the international antiquity market," the culture ministry said in a statement. They were repatriated over the past two months.

The bull's head had been exhibited at the Met and was spotted as part of a drive by Manhattan District Attorney Cyrus Vance Jr. The official has made it a priority to track stolen artwork and the repatriation of the Lebanese sculptures capped months of cooperation between Beirut and the U.S. authorities.

The repatriated works unveiled on Friday also included a sixth century B.C. marble statue that had ended up in the same private collection as the bull's head.

The other pieces were a fourth century B.C. statue that had been in the possession of a private New York collector, a fifth century B.C. marble torso that turned up in Germany and a statue of a young boy which customs seized at the northern port of Tripoli.