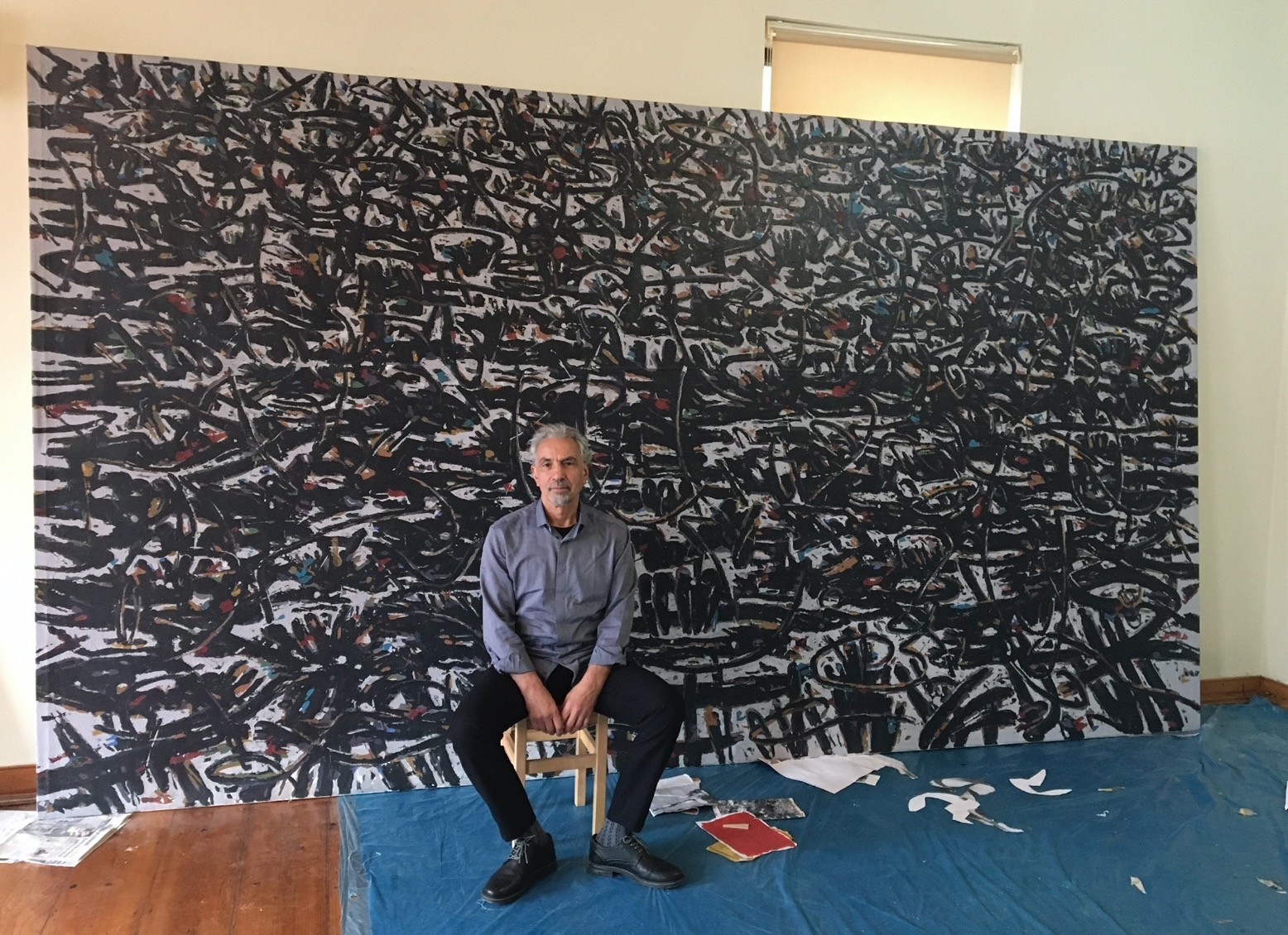 Mahmut Celayir creates his landscape paintings which bear traces of his Southeastern Anatolian origins in his studio in Istanbul.
by Matt Hanson Feb 19, 2018 12:00 am

The vast soul of Mahmut Celayir is framed in the highland landscapes of his origins as he paints the deep ecology around Hesareg, a mythical peak overlooking his native Bingöl north of Diyarbakır, where he drew the inspiration and title for his current exhibition at C.A.M. Gallery until March 3

In the shadow of Mount Hesareg, local Zaza folklore speaks of mystical burial grounds on the alpine slopes where the saintly spirits of the revered departed watch over surrounding villagers as faithful protectors in the afterlife. Etched with footpaths that once guided ancient Babylonian and Greek soldiers as Alexander the Great avenged successive Persian invasions, the ground is alive with visible narratives of East and West, of love and hate in many a bygone human presence behind the masks of its all-encompassing nature. In the last hundred years, the snowy range has witnessed historic changes, from the power struggles of warring clans to the escape of refugees seeking asylum under the sheltering air.

During summers, the seasoned painter Mahmut Celayir returns to the mountain to revisit his birthplace in nearby Bingöl, often camping for months in the foothills below the wild summit. The land is his creative nucleus, the raw material for a wholly original painting aesthetic that he has advanced for over three decades while living mostly between Stuttgart and Istanbul. In his childhood memories and until today, he forms a playful relationship to the earth around his family home, especially during its hot season as it grows from the shrubs and soil, cultivated by the stories and villages that bear witness to the merging of planet and universe, atmosphere and rock, the unending unification of all that is on the timeless horizon. 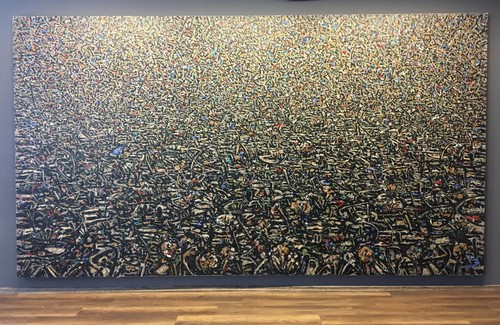 The grandest piece of the artist's current exhibition is titled "Region," which he painted in the Aegean coast's Ayval›k as his atalier in Istanbul wasn't big enough.

Celayir left the bountiful, regenerative abode of his rural beginnings to study art in the haunting, irresistible megalopolis of Istanbul. In the 1970s, it took him a day's journey overland to arrive in the last Ottoman capital where he enrolled in the Special High School for Art, one of two chief institutions that existed at the time in Turkey for budding painters. Now housed in Marmara University Fine Art Faculty in Acıbadem, Kadikoy, its rival was Mimar Sinan Fine Arts Academy, which taught more formal approaches aligned to the Turkish cultural establishment, whereas the freer Bauhaus movement of Germany influenced the Special High School for Art.

As a young student of graphic art, his initial drawings were simple portraits, typically depicting the old-fashioned, aging countrymen of Turkey. In his immediate artistic progression, before he found his most enduring signature voice on canvas, he designed the contours of land through serigraphy techniques that he continued to develop in Germany while engraving zinc cityscapes of Istanbul's oldest quarters. Painting entered his repertoire through his practices with natural realism, inspired by the people and terrain of his upbringing, often exotic and even oriental to the Western eye, as tight gatherings of robed musicians and noble elders appear as nomads remote from settler society and steeped in the long vistas and meditative sanity of one broad, earthly embrace. They instill the effect of a healing exhale, yet, he adds a hint of a forewarning in the recurring imagistic device of surveillance equipment to relay the surreal desolations of territorial memory amid the idyllic fantasies of naturalist romanticism.

The neo-impressionist pointillism of Georges Pierre Seurat comes to mind when peering into the breathable life of his realist works, which are deceptively painted with photographic precision when seen from across a gallery room such as at C.A.M., the well-established

curatorial space in the storefront arts district of Istanbul's Çukurcuma. In the last decade, moving from upscale Nişantaşı to the downtown nexus of stylish contrasts, Celayir has held four solo shows at C.A.M., a proud champion of his craft. Window shoppers may glance at the one Celayir painting on display for the exhibition that faces the street, the only plain representation of Mount Hesareg, with its chestnut-hued plateau ridge fixed with an abrupt, mixed-media supplement of a striped, orange and white pole, the common eyesore of a construction site. Sadly, the beloved mountain is now serving tourist demands, peopled by skiers and transients without a mind for the vital calling of its inspired atmosphere.

Looking forward to a seminar residency in Berlin in March where he will enjoy the liberty to give vent to such concerns, Celayir has long attracted notoriety in Germany, as with his friend, the art historian Barbara Lipps-Kant, who has written about Celayir for many years. Through his kind sense of humor, he is not shy to confirm that she is related to Immanuel Kant. In the 1980s, still maturing as a fresh transplant in Germany, where he would live for over two decades and gain citizenship, his painting followed certain tendencies born of his new domain. He assumed the intricate and philosophical methods of the Mischtechnik (literally, the mix technique), variously conceived by such proponents as Max Ernst and Laurence Caruana among eccentric and uninhibited cultural elites across Europe seeking to fashion a trans-historical image-language from the mythological archetypes of the collective subconscious. Celayir conveyed that dense, pictorial ideology by excavating motifs from the Babylonian, Hellenic and Anatolian civilizations that graced his homeland as in the unconsummated dreams of imaginary temples reaching through the layers of time to surface at the end of his painted brush.

It was not until 1991 when he painted a canvas he titled, "Landscape" when he embarked on a stylistic path that would become his key signature since then and for his most recent pieces currently exhibited at C.A.M. Over the years he has alternated between abstract landscapes to the methodical realism of his earlier direction. Despite formal differences, all are equally derived from his experiences on the land that raised him to return to its sources of wonder and power in blissful, creative union. His process begins in the design of basic patterns of forms, calligraphic, post-literate, often with collages sketched over newspaper shreds and drawn similarly to the texture of his engravings, bound to the natural rhythms that vibrate from Mount Hesareg. In the final stage, he uses color. With titles like "Aramaic Landscape" and "Summer Diaries" he has a writerly conscience, prompted by his asemic experimentation, and his voracious readings into the diverse texts buried in his paint, conveying the loss of literacy, of people, and even of the landscapes he devoutly paints.

In search of the slightest measures of freedom, space is at a premium in his work, as is clearest with his recent piece, "Region" (Bölge), stretching to 450cm wide to evoke his recurring arrangements as the mergence of sky and earth that he has refined since he began painting abstract landscapes. He produced two such works at an art residency on the Aegean coast in Ayvalık last spring, as his atelier in Istanbul was not large enough. The second piece is off-site a few steps from the Galata Tower in a historic apartment lent to him by a friend, situated in the long-abandoned Levantine neighborhood of the illustrious, all-but-forgotten late Ottoman past. His nine paintings currently on display at C.A.M. explore subtle variations in color. Beside three realist landscapes that have very subdued palettes, he weaves specific color pairings, with overarching spectrums shot through with splotches of red, a symbolic gesture also reminiscent of the works of Syrian painter Ibrahim al-Hassoun.

"Hesareg is a mythic place for me. It has many stories. Everyday in my village, I see that mountain. It is symbolic for me. It has a melancholy background, and brings up memories," Celayir says through his heavy German-Turkish accent, generously sharing the soft light of his natural, artistic brilliance to convey lifelong appreciation for his country beyond the prospects of commerce, and even the need to find work, as he has ever been rapt in the need to express himself and his most abiding experiences in nature as one. "Firstly, what is important is the picture. It has form and color. I don't want to tell stories. For me, paintings must first be paintings, something you enjoy and like, and which is also new. Then, you can discover meaning after that. And it must not be so direct. It must be a little hidden. You have to feel there is something more."