A play about a very European failure: Le Birgit Ensemble's ‘Memories of Sarajevo'

The French theater company Le Birgit Ensemble's ‘Memories of Sarajevo' is about the siege of Sarajevo that started in 1992, the year of the Maastricht Treaty, a foundational moment for the EU. The play successfully pits European rhetoric of peace voiced by several heads of state against the ethnic cleansing that happened on a continent that had sworn ‘never again.' The scenes alternate between the worlds of politicians arguing over truce clauses and the world of Sarajevans who try to survive on the ground. One of the performances are available on YouTube

We have no say in which conflict we will grow up watching. That is, if we are "lucky" enough to be mere spectators as towns are bombed and shelled. As we grow older, we see the traumatic images we have grown up with repeat themselves over and over again in different parts of the world. The conflict that marked my early youth and decided my relationship with Europe was the Bosnian War. The image of Gen. Ratko Mladic saying they have finally taken revenge on the Turks after the massacre of Srebrenica. Beautiful people under siege in Sarajevo.

Images on MTV of two young people showing the basements they live in, and saying, "We don't want to spoil the party but, don't forget us." The utter feeling of helplessness. For me, any recreation of the Bosnian War in fiction, documentary or drama comes with an inherent trigger warning. It was with this feeling that I went to see "Memories of Sarajevo," and the play managed to put me both in the middle of the siege, and pin me helplessly in my seat as a spectator.

'Memories of Sarajevo' is the brain child of Julie Bertin and Jade Herbulot, the French theater company Le Birgit Ensemble. The play premiered in July 2017 at the Avignon Theater Festival, and is part of a tetralogy about "the failures of Europe" as the play program puts it.

The play opens with a ghostly figure of a woman walking across the dark stage. As we shall find out later, it is the figure of Europa, the Phoenician princess kidnapped by Zeus, and whose likeness, naked, on a bull, can be seen outside the EU parliament today. As 'Memories of Sarajevo'is one of a cycle of plays about the recent history of Europe, this figure can be said to be the protagonist, and in many ways the chorus in the Greek tragedy sense, guiding us through the action, hinting at the ways we ought to be feeling about what we see.

The first scene is a musical comedy rendition of the signing of the Maastricht Treaty, one of the founding moments the EU, a treaty that led to the adoption of a single currency. There is a general euphoric air among the European heads of state represented on the stage. They sing Beethoven's ninth in their various languages holding champagne glasses.

War is of course always the elephant in the room when Europeans get together to discuss their union. This time, the elephant appears in the shape of none other than Archduke Franz Ferdinand himself. He is, as you can imagine, highly skeptical of these European leaders' high hopes. The Bosnian War is still some months ahead, and yet, he tries to tell current presidents that it is no easy task to keep different nations in harmony. He should know, he ruled over the sprawling Austro-Hungarian Empire, and ended up assassinated where else, but in Sarajevo.

This ghost from the past then becomes the vehicle through which we are given a history lesson. And then Birgit Ensemble's attention to the audience interaction comes into play, as Ferdinand tells us to look at the program we have been given at the beginning. He tells us that we all have a map of Bosnia and Herzegovina - can we please check to see what color our maps are?

He then asks those who have received a yellow map to hold them up in the air and tells us that we are Muslims, i.e. Bosnians as they mean the same thing in Bosnia (I happened to have gotten a yellow map as well). He then does the same with blue maps (Serbs), and red maps (Croats). For a moment, all the hands are up in the air, waving their "flags" and you look around to realize that you have been sitting next to a friend/foe, a thought that had not occurred to you as you were innocently watching the play.

The moment serves to make us realize as to how randomly settled the different ethnicities are on the ground in Bosnia, as we are with our different color maps in the auditorium, and it blurs the boundaries between the "observers" and the "belligerents." This idea of "observing" is questioned again when later in the play we have one of the "peacekeepers" take one of the microphones that serves to address to the audience directly, and confesses that as a U.N. soldier he felt powerless. The play does not push the argument of the soldier too far - he says what he needs to say about how he had no orders to use force, that he felt sorry etc. It is natural that he should ask for forgiveness. And it is also natural that this member of the audience will not give it to him.

After Ferdinand's geography lesson, the leaders of the different sides of Bosnia make their appearance. They are all played by women. The first leader to appear is Alija Izetbegovic, the philosopher king, and I am at the edge of my seat throughout the whole play to see whether they are going to slander him in any way in the name of "balance," in the name of "hearing both sides." After he explains himself, Radovan Karadzic appears, introducing himself as a "poet and psychiatrist." 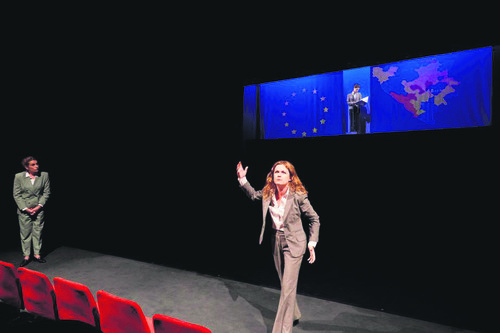 Leaders of the different sides are all played by women. The first leader to appear is Alija Izetbegovic, and left to him stands Radovan Karadzic.

He is played by Eleonore Arnaud, who does an incredible job of imitating Karadzic's body language. She does such a good job in fact, the newsreels from the '90s roll in front of my eyes. His/her every word and movement has an archive of footage in my own brain that comes to the surface and almost leaves me breathless. "It is time to push back the Turks," he says. That one line from the whole war haunts and re-haunts me - the feeling that the Bosnians were attacked because they were taken to be Turks. It is not unlike the feeling one gets nowadays when Sikhs get attacked because they are taken to be Muslims. How to say sorry to those suffering from the violence that is actually directed at you?

I am put through several emotions at once, and this is just the prelude of the play. We move on to an account of the first days after the referendum, the start of the siege of Sarajevo. There is a counter above the stage that counts the days: Day 1, Day 2, and Day 300... We get footage of the siege, and people walking the city after the siege in the background.

"How is it that the very moment that we are talking about Maastrichtsuch a thing is allowed to happen in Europe?" a newsroom voice asks. And then we get the imposing silhouette of Europa whom we have fleetingly seen at the beginning. Two actors tell us the story of Europa - "born between Africa and Asia, in Phoenicia" and the very first words we hear her utter are the places she has been to in her travels. "Smyrna," she says with her deep voice that sounds like it has weathered many storms, and then adds "Belgrade, Sarajevo."

After this "mythical" interlude we see that the stage is divided into two levels: The upper level where various meetings and quarrels take place between U.N. representatives, Izetbegovic and Karadzic, and the lower level, where we witness the day to day lives of Sarajevans during the siege. They wait, they despair, and they regain hope.

Now and then they walk to the microphones standing near the edge of the stage and speak to the audience. We see young people trying to have parties in basements, playing songs that I too remember from the 90s. Several massacres by Serbian sharpshooters are enacted on stage. The actors representing Sarajevans are flooded with red light; they fall on the ground when a bullet hits them, and then get up to die and die again. 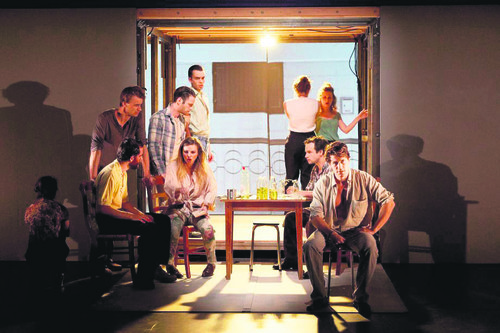 Sarajevans of different ethnicities trying to make sense of the impending nightmare.

Then the figure of Europa appears and cradles them, and has a long soliloquy about how Sarajevans are her true children - not the politicians that we see on the upper level, playing with words. She sings the song "Sarajevo mon amour" both in Bosnian and French, and with her husky voice and incredible vocal power, she turns it into a lament - the sort of lament one can expect from a goddess.

It is a cathartic moment: Europe, which has never kept its promise of "never again," is seen here as somehow acknowledging what happened in Bosnia. It is up to the audience to decide whether Europa has buried her dead in a fitting manner with this play, whether such artwork can contribute to reconciliation. The more important question remains, however, not whether we can forgive the politicians or Europa herself, but whether we can forgive ourselves, who have sat and continue to sit silently to watch it all unfurl before our eyes.