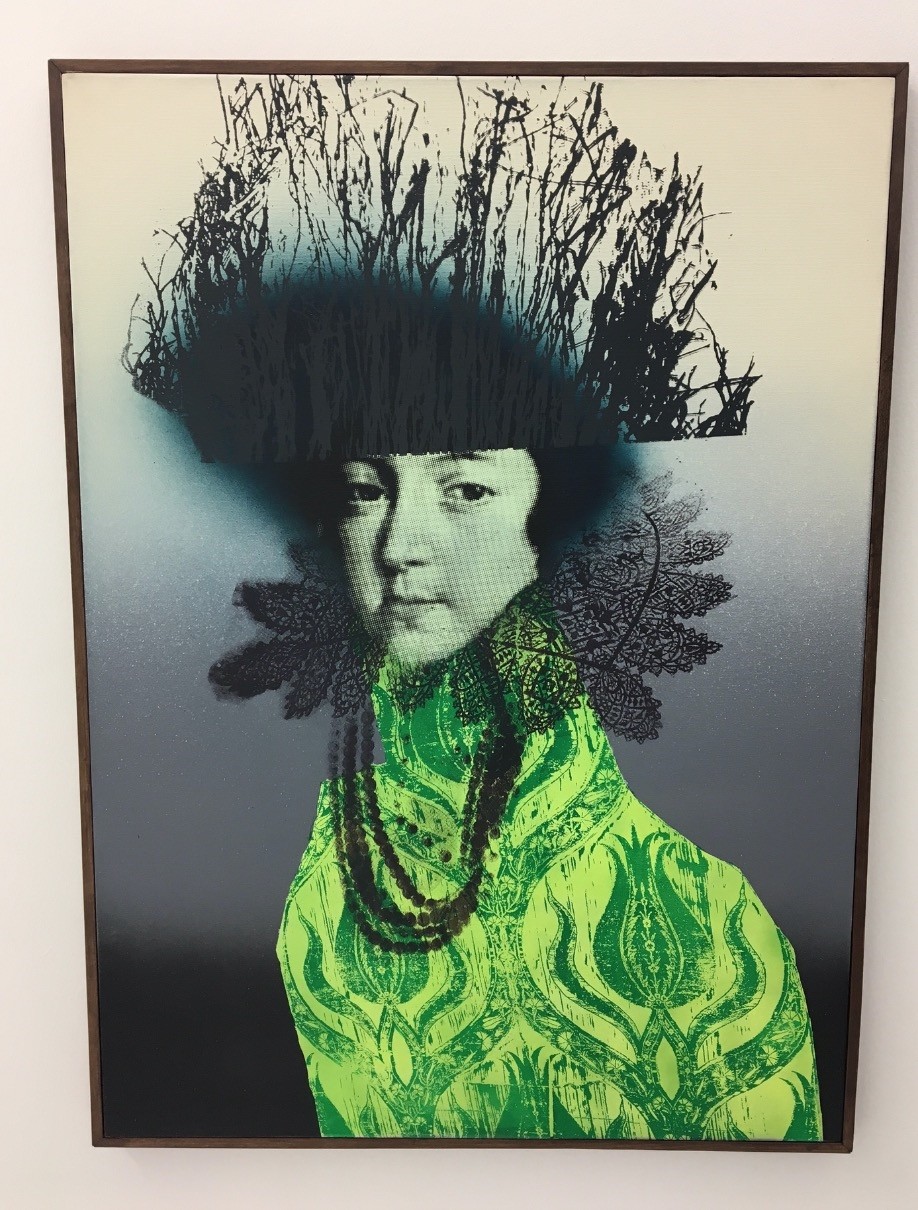 u201cLe Sultanu201d is one of the unique works that Raphau00ebl Barontini created especially for his first solo show in Turkey at The Pill in Balat.
by Matt Hanson Apr 26, 2019 5:05 pm

The Golden Horn's Byzantine walls crumble into the congested shorefront avenues of Balat, where a contemporary gallery called ‘The Pill' exhibits the first solo show in Turkey by the mixed-media, French painter of Caribbean ancestry Raphaël Barontini, who reimagines the face and color of historic power

Art speaks for itself. The interpretations of visual history and its criticism are most often composed and explored at a distance, parallel, independent, and sometimes even opposed to the voices that are carried through painting, sculpture, and all of the mediums of expression in which artists live and breathe to create themselves and the world anew. While the higher pursuits of human intelligence would seek to transcend worldly concerns, especially in the finer realms of culture, social realities weigh heavily for contemporary artists.

The virtual limitlessness of media dissemination has prompted a generation of awakened and creative people to respond to the ongoing traumas of the more silent and oppressive past with critical insights into the present. While the global movements spurred by technology are cause for optimism, the unresolved crises of postmodern identity have simultaneously subverted the liberating advantages offered by individualism, ultimately conforming masses of xenophobic loners whose natural capacities to think for themselves and to create with empathy are flooded by unceasing waves of intangible materialism that are as unattainable as they are irresistible.

The very remembrance of history has become an ordeal. Only the more intrepid of old souls break through to enlighten the cultural moment by unshackling the unbroken persecutions of the past from the psychological and utterly real chains locked by the rulers whose sons often still hold the keys, and from the burden of the collective struggle when so many are caught in the depressions of what would appear to elites as mere anachronisms of earlier times. 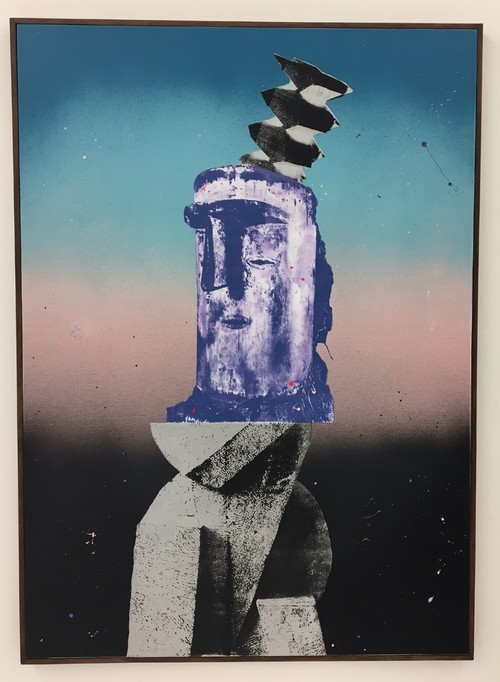 Raphaël Barontini is a mixed-media post modern painter with a knack for restoring the African influences in European culture, such as in the Cubism of his screen-print acrylics.

In an amnesic time, such as the present, everyone assumes multiple histories formed of a variety of untimely and endangered identities. In response to blind pride in society, family, nation and culture that overlook the wrongs of the past, even if unknowingly, the public significance of names and heritages are rightfully questioned by the meritocratic ideals of the secular zeitgeist. Somehow, the antiquated forms of the intolerant and narrow-minded return.

The artists of premodern, imperial Europe were once self-styled documentarians whose realist landscapes of the New World, becoming portraits of royal dignitaries and moralizing scenes of Biblical affairs, had an informing and miseducating effect on the predominantly illiterate people on the ground, who bowed down inside the church and palace before looking up at gravity-defying, awe-inspiring canvases lathered with richly oiled palettes that appeared to be touched with the dreamlike illumination of human class, and divine presence.

Once free of the unsurpassed violence and displacement of two world wars and the suppression of its immediate aftermath, which was disembodied and reformed on the cusp of the avant-garde, the Dada and the surreal, artists gained a new perspective, enlightened by reflexive introspection into the meaning of identity. They questioned the superiority complexes and normative means of belonging to certain places and times, and wondered what it all meant for the world at large. Some questioned whether they were at all. And so, in an era defined by post-war decolonizations, they felt at liberty to make themselves up again in relation to the change of the times, its upheavals, revolutions, and innovations.

Surges of globalized contemporaries now allow the rediscovery of the inspiration in the significance of premodern history by seeing its most stubborn problems unfinished with the honing of techniques to emphasize the present-day relevance of outdated trends. Among the more determined and awakened of 21st century artists is the French painter Raphaël Barontini, whose recent works employ vinyl, rope, silk-screen, ink and acrylic to convey his divisive ancestral consciousness through a series of visual metaphors: the black face, the slave ship, the African sculpture, the imperialist portrait. "Tapestry From An Asteroid" is his first solo show in Turkey, which he titled to encompass a span of time that is as retrospective as it is forward-thinking.

"Raphaël defines himself as a painter, but he likes to explore the boundaries of painting. He is known for his textile pieces, which remind you of the sails of big ships. He's very concerned with colonialism, post-colonialism, the heritage of blackness in painting and the reputation of black people in painting, which he finds very lacking in the history of art," said Suela Cennet, a young and charming French curator, who returned to her Turkish roots to found and direct "The Pill," a contemporary gallery exhibiting internationally renowned artists in the mixed neighborhood of Balat, which is traditionally home to minorities. "His typical aesthetics are assemblages of forms and symbols, close to the Dada movement formally speaking. He'll mix those cultural heritages, European, with others from Africa, pre-Columbian civilizations, and he will create his own library of symbols and hybrid characters. He's interested in portraiture, because it was for a long time reserved to privileged people."

As a Frenchman from Saint Denis with Caribbean and Italian roots, Barontini is rewriting art history by fusing the elements of disparate cultural heritages, from Nigerian masks to the paintings of Velasquez, he crosses the deeply polluted oceans of contemporary race relations with the intuitive direction of his personal odyssey. When entering The Pill, his most immediate piece is "Barque solaire" (2017), translated literally as Solar Boat. It has a two-faced resonance, as the halved face and penetrating eyes of its subject, a black man, trains his piercing stare over the doorway to the former generator factory. Until the end of the exhibition, on March 31, the many and diverse visitors from the neighborhood and across Eurasia are drawn to the spacious, white gallery with the invitation to walk around the first tapestry to see a negative of a plushly-outfitted European aristocrat in his decadent ruff printed on the back of the fabric.

"Behind the black face you have the actual portrait. The installation was meant to be an island somewhere on another planet, on in your imagination. There is an invocation of an odyssey, of a long trip. You have to discover the paintings from different angles," said Cennet, standing under his largest-ever textile piece, the title work of the exhibition, 'Tapestry From An Asteroid,' which stretches 1000cm-wide over an accumulation of black sand. "For him, it's always about what it means to be a painter today, where images and techniques are all over the place. He has been shaped by his identity issues."

Cennet and Barontini curated the exhibition together. Although new in the neighborhood since opening only two years ago to show Turkish and international artists, The Pill has developed a unique reputation by immersing Syrian youth around the corner, who had never seen contemporary art, and the upper echelons of the Istanbul art world in the French scene, such as in recent inaugural solo shows by Elsa Sahal and Eva Nielsen. In a city where the museums and cultural establishment have been influenced for the last decade mostly by Germany and England, the Paris-based, French postcolonial, Afro-punk attitude of Barontini offers a tantalizing contrast. From the biennials of Bamako and Thessaloniki to acquisitions for LACMA (Los Angeles County Museum of Art) and leading French museums, his name is soaring to worldwide prestige, comparable to the regal figures that he visualizes with sharp critique.

The imposing sound design by NYC-based musician and poet Mike Ladd is a double-track cycle, Solar Drums and Odyssey that bears down over the gallery floor like an apocalyptic wind storm of divine vengeance recorded from the slaving coasts of Africa to the parading streets of Guadeloupe. It is a device that Barontini employs with recurring cinematic effect in his exhibitions, as synth drives and percussive booms sweep into the air with the dramatic force of a Caribbean carnival climaxing in full swing. Akin to the color field painting and lyrical abstractionism of Sam Gilliam, his key style is distilled in acrylic gradient and silk-screen fusions that he accents with action drips over interchanging African, European and creole aesthetics, where faces, bodies, clothes, colors merge, spark, materialize and disappear.