Over 50 artworks from Louvre arrive at Iran's National Museum 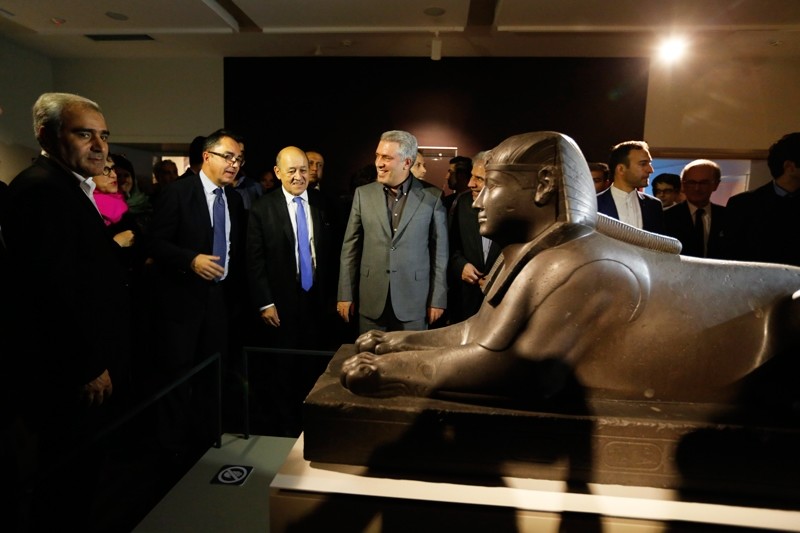 French Foreign Minister Jean-Yves Le Drian (C) and Vice President of Iran Head of Cultural Heritage Ali Asghar Mounesan (C-R) and Louvre museum President Jean-Luc Martinez (C-L) tour an exhibition of 50 artworks from the Louvre (EPA Photo)
by Mar 05, 2018 12:00 am
Journalists flooded Iran's National Museum on Monday for the arrival of more than 50 artworks from the Louvre -- the first major show by a Western museum in the country's history.

The show reflects France's determined use of cultural diplomacy as it seeks to rebuild traditional ties with Iran, even as their officials hold tense talks over political and security issues.

The doors were unsealed for journalists at the National Museum in central Tehran, which is currently celebrating its 80th anniversary, a day ahead of the public opening.

Among the items shipped over by cargo plane were a 2,400-year-old Egyptian sphinx, a bust of Roman emperor Marcus Aurelius and drawings by Rembrandt and Delacroix.

"Some were definitely easier to transport than others," said Judith Henon, one of the experts sent by the Louvre.

"Our Iranian partners really liked the sphinx, but it weighs close to a tone and was extremely complicated to put in place."

The show marks the culmination of two years of work since a cultural exchange agreement was signed during a visit by President Hassan Rouhani to Paris in January 2016.

"Relations between France and Iran are old and profound because France was a pioneer of archaeological exploration here," Jean-Luc Martinez, president of the Louvre, told AFP.

"This completely unprecedented exhibition... allows us to make the link between this glorious moment and relations that date back to the 19th century."

France has deep cultural ties with pre-revolutionary Iran, and the National Museum itself was built by a Frenchman, Andre Godard, in 1938.

While Britain and Russia battled for political influence in 19th century Persia, it was the French who led the way in archaeological affairs.

"France had priority on cultural questions in the late 19th century and was the only one doing digs in Iran," said Julien Cuny, one of the Louvre's curators for the Tehran show, and an expert on Iran.

So as not to hand over everything to Britain and Russia, the Persian monarchs handed control of certain issues to other countries, and cultural affairs ended up largely with France.

"As a result of that, it was the French that set up the antiquities service here in 1930," said Cuny.

That helped preserve France's reputation among Iranians even as that of Britain, the United States and Russia plummeted in the years ahead of the 1979 Islamic revolution.

"Back in the day, the British were looking for oil while we were doing archaeology, so our relations have focused on positive things. It's an image that has stuck," said a French diplomat.

The irony is that the show opens just as France and Iran find themselves in a tense diplomatic moment.

French Foreign Minister Jean-Yves Le Drian was in Tehran to inaugurate the Louvre show, but more importantly to hold difficult talks over ballistic missiles and interventions in the region.

Iran's conservative press accused him of insulting the Iranian people with his criticisms of the missile program and labeled him a "lackey" of US President Donald Trump.

The cultural domain offers a chance to focus on the positive re-engagement between France and Iran, which has also been seen in a number of trade and investment deals involving carmakers Peugeot and Renault as well as energy giant Total since the 2015 nuclear accord.

University links are another branch, with some 1,700 Iranians currently studying in France.

"In the tumultuous ocean of international relations, cultural diplomacy is a flare that we should maintain together," said Le Drian.