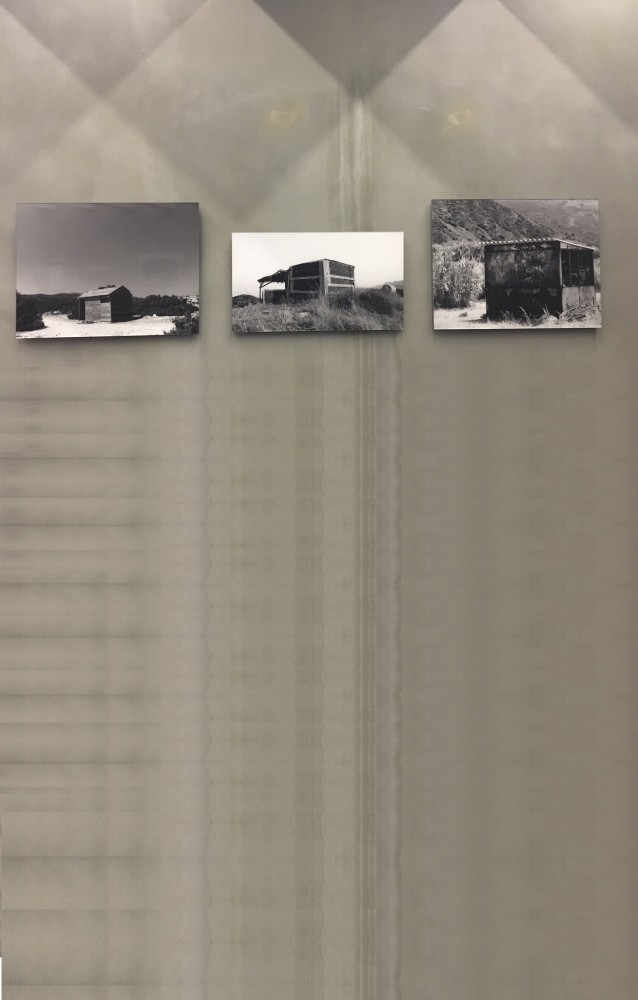 Boğazkesen Avenue winds down the coastal highlands of Istanbul like a branch of streams, where the Joycean cafe, riverrun, breaks from the pack of new espresso shops with its taste in 70s music, adjacent publishing house, Norgunk, and exhibition space showing ‘The Art of Garden Care' by Selim Birsel until April 21

The way to the latest artworks by Selim Birsel leads to something of a direct experience with the first line from Finnegan's Wake. It begins at the bottom of a street that once coursed with the runoffs of flowing valleys and waterfront bluffs descending to the turquoise marine nexus of the Bosporus strait, the Golden Horn inlet, and the Marmara Sea. As the quasi-blind Irish writer James Joyce once joked with quips of the pen, "Riverrun, past Eve and Adam's, from swerve of shore to bend of bay..." To his most noted scholars, his stream-of-consciousness prose poem, likened to The Disconnected by Oğuz Atay, is a cyclical map that charts a path to realize the metaphor of Eden, that garden of perfection where the original man and woman fell into time, modernity, history, and what Freud titled "Civilization and Its Discontents."

In September, the cafe riverrun opened atop two floors, all entirely devoted to the purposes of literature, art, and every sense of community that fosters independent creativity and vibrant individuality, a mode of being that is as increasingly rare as it is essential. A trusty barista named Buğra serves some of the city's finest imported blends of filter coffee beans from Ethiopia, Burundi and Colombia as he airs the classics of folk and rock from a generation past. The ambiance of musical and literary lore rises from an enviable store of modern classics in translation beside stacks of exquisite vinyls that prompt a self-education in counterculture. 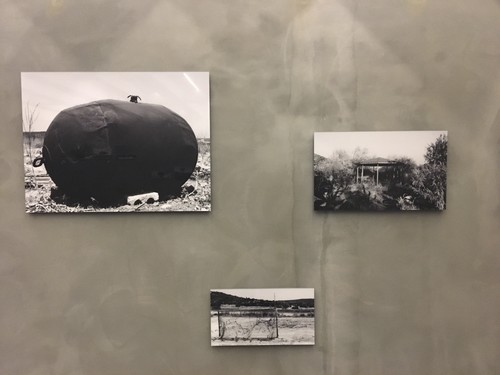 Birsel invites art enthusiasts into his world with something of a gardener's taste for odd and disparate elements.

The owner, Alpagut Gültekin, is also publisher of Norgunk editions and sometimes emerges from an office in the chic building that stands out for its sleek, novelistic storefront in historical Tophane neighboring the old Italian district. During a blustery chill on the evening of March 1, he welcomed usual faces and curious newcomers with a steady grin to "The Art of Garden Care," the third exhibition opening at Bunker, the gallery space beneath riverrun that began with a prestigious show by Bernard Frize and Ayşe Erkmen. In 2015, he inaugurated his current pair of ventures in contemporary art by opening Ariel Sanat with his wife Ayşe Orhun inside the classy Narmanlı vintage apartment building in Teşvikiye uptown. There is a signature aesthetic in boldfaced, black-and-white accents throughout the sleek, small-scale entrepreneurial link that is as visible in each book design at Norgunk as it is immersed in the interior decor and art curations from top to bottom at riverrun.

THE ARTIST AS A GARDENER

Selim Birsel, the Brussels-born installation artist who launched his exhibition career in Turkey at the Ataturk Cultural Center (AKM) in 1991, works with the color and texture of the Bunker space. In contrast to his duo show with Sinan Logie recently at Ariel Sanat from November to January, his series for "The Art of Garden Care" is intensely personal. Entering the Bunker space, the effect is like walking into the strange, half-neglected garden of a distant friend whose ambitions seem awkwardly out of tune with his immediate reality. He is in search of a wholly unique perspective and in the process his every perception is a stretch. Such an attitude fits the nominal theme of the exhibition, namely to visualize the domestication of nature and to rethink what it means to be a misbegotten steward to the assumedly less-intelligent life forms.

The ancient practice of horticulture, of gardening, alters both nature and humanity. It is one of the earliest leaps of artificial technology, simultaneously transforming the social identity of the peoples it impacts along with the surrounding ecology, an advance thinly akin to the digital communications of today as it was the very cutting-edge in prehistoric eras, and in many respects its timeless advantages are still at the forefront of food security and biotech issues. Across cultures gardening has a popular lure for its mixture of informality and habit. For millions of hobbyists alone, it is often more a cathartic mess of a joy than a severe discipline. The style in which people garden speaks to how they approach life. In southern Mexico, for example, gardens of German-speaking Hutterite colonists are prim and lined, whereas neighboring indigenous Mayan communities harvest from patches that look more like untended overgrowth. 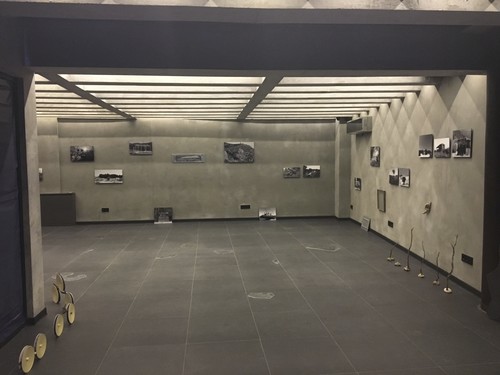 Below the street level cafe at riverrun in Tophane, the Bunker is a new exhibition space holding its third opening with Selim Birsel.

Selim Birsel arrived to riverrun the day before his solo opening to finalize the installation, making it appear as if he had left it unfinished and neglected. He had selected 22 of his photographs taken from various international sites in the years of 2004-2017, comprising a series titled "The Abandoned Ones" that blends into "Garden Installation" (2018) as two of the plexiglass and Dibond mounts are simply left on the floor, where they lean against the wall that is coincidentally painted in the same silvery hue as the colorless prints. One is even about face, with only the artist's signature, date and title visible. Another is merely an empty frame, and the perimeter is a mashup, somewhat characteristic of Birsel's history of scattered objects, as in his "Arguments" (1996) piece for the David Ben Ari Museum in Israel. There are question marks everywhere. Reams of white paper stacked by the cutout of a human figure, a blackboard and single piece of chalk, an archaic cellphone plugged in to charge. Whorls of interconnected plates stand upright against a corner aside a bass guitar with its amplifier switched on for the sonic delights of passersby with an itch to strike a chord. He strew fragments of sliced zinc across the floor under one piece of it that is roughly etched and hanging beside the photographs to highlight the metallic origins of the medium.

At a glance, the installation and photos are as decontextualized and out of place as a gardener in the middle of a city square. "The Art of Garden Care" is an intimate trespass into the private property of the artist's creative interior, now exposed as he has conceived land use patterns with a mind for emphasizing the idea of a garden as a figment of time. He has refined and broadened its designs, utilities, constructs, and settings within the narrative arc of his work over the years. When seen from the vantage point of his past installations, "The Art of Garden Care" makes sense within its internal logic. There is a method to the madness of his focus on natural dereliction and the outcast landscapes of post-human impact.

In his 2002 book, "Over and Beside the Works" there are clear lines of continuity in "The Art of Garden Care" from his introductory steps as an exhibiting artist back when he covered the floors of a room at the Russian Museum in St. Petersburg with various spices for "Spice Main" (1990) and etched geometrical shapes into preexisting tiles for his "The Shadow of..." (1993) piece in Taejon, South Korea. Inserting an epigraph after the title page to his tightly bound saga, he conveyed the iconoclastic wisdom of singer Jim Morrison: "I prefer a feast of friend to the giant family." It encapsulates the personality and humor of Selim Birsel, at least as he felt at his March 1 opening.

Despite being an accomplished artist with much of his reputation etched permanently into the Turkish and European pantheon of contemporaries, he still searches earnestly in the obscurest, nameless corners of creation to express visions of individual consciousness. As aloof and unpredictable as a remote, eccentric horticulturalist, he is not one for crowds. While circled by a proud gathering of admirers, friends, family, colleagues, students, he stole away at every possible opportunity to sit at the cafe with an acquaintance, preferring one-on-one, face-to-face conversation beyond the flood of greeting etiquette that seemed nothing more than senseless and impersonal habits of repetition. He gravitated to street level for a cup of coffee. Among the rows of books surrounding him was one of his, "News Impressions." It is part of an ongoing series that he will continue in coming weeks at a workshop Cyprus, where he photographs daily life into a conceptual news feed. Norgunk is slated to publish a forthcoming volume on his contemporary practices. Yet on the night of his opening, he was delightfully elusive, careful not to reveal any of his magic tricks. He quietly removed himself from the gallery, ultimately sharing in the company of the academic Lewis Johnson, his longtime writerly-accomplice that he has known since his professorship at Bilkent in the 1990s.

In brief moments he would clarify points from "The Art of Garden Care" as on the importance of having a sound element. He reminisced on former days playing bass and singing. Birsel is authentic in that he not only means what he says, he is what he says, even when he speaks mostly through the silence of pure visuals. "My work is like words," he wrote, as posted at riverrun between the cafe and gallery floors. "Obviously, the world is not a rose garden, but deep inside I always maintain some hope, some positive spirit. Pointing to the traces of despair, I am maintaining the hope and light in me. [...] I produce my work for myself before anyone else. Then I share the emotional and rational interaction through an exhibition or performance."