Out of season: The deep ecology of Elmas Deniz 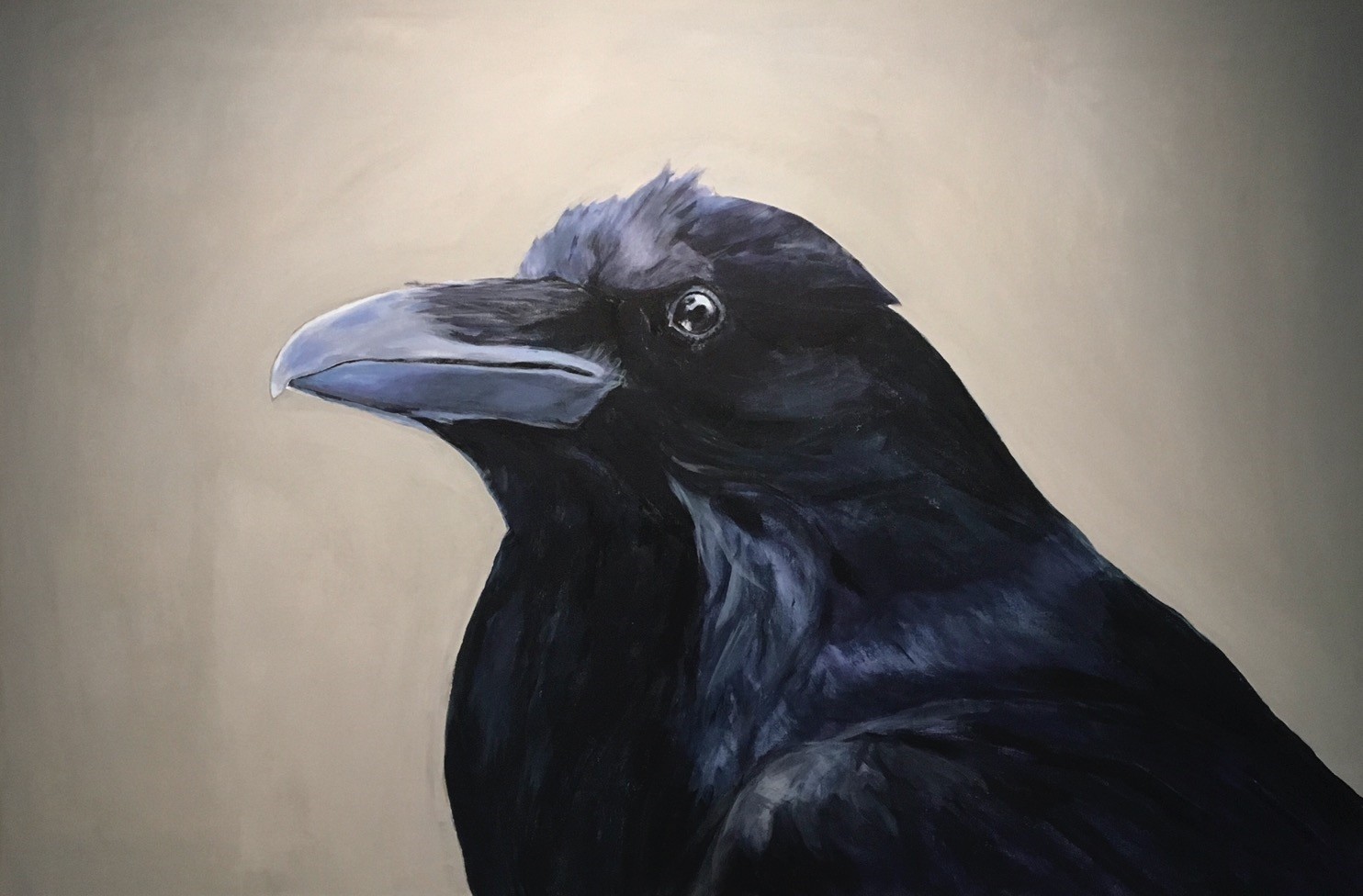 In her u201cRaven Portraitsu201d (2018) the artist Elmas Deniz portrayed ravens as dignified, complex beings for her current solo show at Pilot Gallery.
by Matt Hanson Mar 12, 2018 12:00 am

The current show at Pilot Gallery is ‘A Year Without A Summer' by the textual and multimedia artist Elmas Deniz. On display until March 17, its timing in the year leads perfectly into the most anticipated seasonal change, when people are keenest to appreciate the environment that Deniz reminds has no warranty

On casual, weary weekday mornings in Istanbul, the slim, the industrial doorway to Co-Pilot opens at the edge of the stylish Cihangir district leading uphill to Taksim Square. Its spacious basement loft houses Pilot Gallery in an auxiliary space awaiting the renovation of its street-level storefront for downtown window shoppers to again gaze into its transparent facade and admire some of the finest curated art in the city.

The artist Elmas Deniz emerges into the light of day before overcast winter grays are cleared by fiery rays of sunlight warming the coastal ecology in an atmosphere of early spring. It's been a while since she last exhibited, four years since her last solo show, and she needs a breath of fresh air, a strong tea, a meeting with someone new. She has an infectious smile, and converses with the familiar cool and open kindness of an old friend.

Over brick-red Turkish tea she speaks freely, quick to vent about all of the problems that she has had with the arts establishment in Turkey in the past two decades and then some, and how she has in the past at times even abstained from joining the ranks of her exhibiting artist peers at work in Istanbul. In the great Bosporus megalopolis, she has endured defining changes in citywide art world trends from group to solo shows in the course of her 16 years active in and out of the scene, mainly exhibiting in Istanbul while often taking up residencies abroad, from Pakistan to Denmark, with a most recent venture to Sri Lanka. 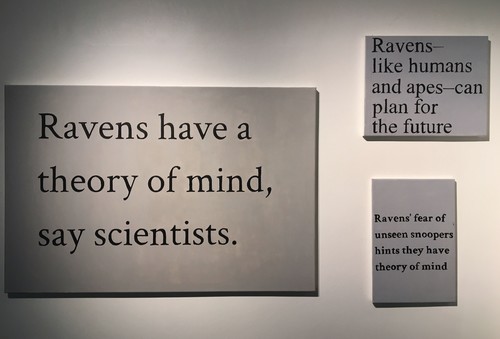 "Ravens have a theory of mind, say scientists" (2018) is a text-based work by Deniz, who meant to show the indirect relationship between animals and human beings.

She decided to plunge headfirst again and work in the system that consistently disappoints with its corrupted values and incurable exploitations. While she does not identify as a medium-based artist, "A Year Without Summer" is her first exhibition since 2003 in which she shows her talent and love for painting with her two canvases, "Raven Portraits" (2018). Its six pieces revolve around her artist book, "Flying Plants, Dogs and Elephants" (2017) and a 6-minute video, "Made to be seen" (2017) that she produced in Sri Lanka with the support of SAHA.

A Woman For All Seasons

As a young girl growing up in the holiday seascapes around Izmir, she describes her childhood as a time of mischievous fun, when she was one of the dark-skinned ragamuffins who wile away the hours jumping in and out of the gleaming Aegean coast when not pestering freeloaders and sunbathers to abandon. It was there and then when she learned to immerse herself in nature, to bask in its liquid joys with a sunny disposition and critical mind liberated against the rushing tides of postcolonial globalization that seeks to consume and sell the world for its beauty, regardless of its integrity as the source of all life.

From the ancient ports and lush shorefronts of Izmir, she began her arts education at Izmir Anatolian Fine Arts High School and soon after at Dokuz Eylül University of Fine Arts, blossoming within 10 years as she became an empowered creative individual expressing herself as the essence of her art foremost before the works that materialize through her hands from and through practically anything.

"A Year Without Summer" begins with the artist's collection of seeds from citrus and carob plants boxed in an elegant, smooth frame of wood, and lit to the effect of a precious rarity. And it is a fair presentation, seeing as how she gleaned the seeds from heirloom varieties, an order of biodiversity that is increasingly threatened by the engineered reproduction and regulated trade behind the world's globalized food industries. The piece is titled "Unsellable Artwork" in the tradition of Warhol's soup cans, as she utilized the context of the art gallery to examine popular perceptions of nature in relation to commercial space. Once placed in a purely aesthetic light, the value of the material changes. It gains new meaning. Finally, it is seen, recognized and most importantly, preserved. 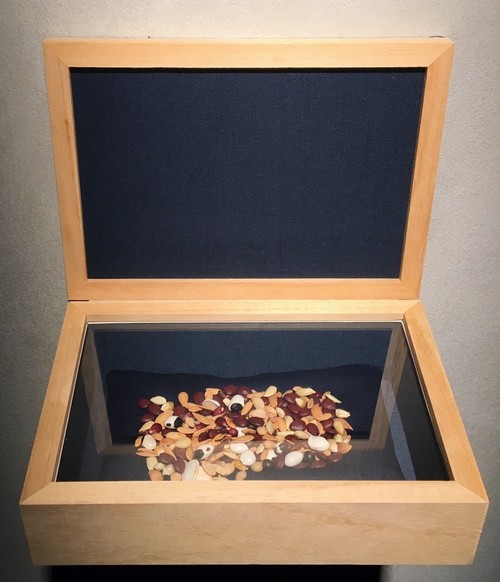 Entering the basement loft where Deniz exhibits her solo show, the first piece is a collection of heirloom seeds.

"I was planning to seed them somewhere. Without a certificate, it is now forbidden to sell these seeds between people, the very ancient and local varieties. I am playing with the idea of art material for trade in a gallery setting," said Deniz, as she frequents organic markets in Turkey and on her travels, lately while in the Sri Lankan capital for the multidisciplinary arts festival, Cinnamon Colomboscope, held last year from Aug. 22 to Sept. 10, where she found inspiration in paper made from elephant dung among other peculiar interests. "It's a great exhibition for English speakers because I produced works abroad in English and brought them here. 'Flying Plants, Dogs and Elephants' is an artist book silk-printed in only two copies for the show. I wanted people to read it in the exhibition not at home, to see the book not as an object. I write about hugging stray dogs, not petting, really hugging."

Elmas has an understated sense of humor as she conveys her relationship to the natural world with a cool-headed intelligence. She treats plants and animals with a refined dignity and blissful respect, as for a wise king, or a happy child. Her storytelling is printed in spare, crystal-clear prose, sometimes only a single, economic sentence a page, to chronicle her thrills as a woman in love with life, a naturalist romantic for the contemporary age of sky-high urbanization. "There is a '1 m2' area that we do not leave," she inked over the rustic elegance of the page unfinished with multi-hued textures of vegetal matter. "We are on the ground now." To her, sinking down to the level of a street dog for a tight and long embrace is a dance.

Her passion then transforms into technical language, as she outlines "Transport Guidelines" for moving live plant material across international borders, drawn from CITES (the Convention on International Trade in Endangered Species of Wild Fauna and Flora). It's all part of her charming wit as an artist-environmentalist with a literally dogged empathy demonstrating the basis of creativity in life and its beings. That reverence lifted her spirits enough to return to the canvas with a paintbrush, as her "Raven Portraits" assert the immemorial prestige and penetrating cleverness behind the visage of the fabled black bird. She glorifies the feathery bust and avian features into profiles of quirky magnetism and luminous attraction.

After we left Africa, as a species, we needed to create life support. We don't have an immediate relation with nature, especially with animals. We don't observe animals anymore. That's delegated to scientists. We get information from news. It's an indirect relation," said Deniz as she stands in front of her series of "Raven Portraits" beside delicately lit, letter-pressed acrylic canvases, "Ravens have a theory of mind, says scientists" (2018) imprinted with a 19th century, Poe-like literary aesthetic. "Everything is anthropocentric, related to us, not with the animal really. Ravens know that others have intelligence. It's another level of intellect."

The earliest works at "A Year Without A Summer" are a diptych of framed plastic bags, one biodegradable, the other not, titled "Mistakes" (2015). It is part of a line of thought that she adapted for her contribution to the 14th Istanbul Biennial, a piece called "Under the Panorama" in which she reimagines the Bosporus as the top layer sandwiching a plastic bag between seafloor sand and the iconic aquatic cityscape. Welded by her brother, her sculptural design, "Greenhouse for Nothing" (2018) is a windowed iron frame housing a bit of soil, as she laments the lack of natural light in most gallery spaces while aspiring to install ethically-sound exhibitions of living organisms in future works.