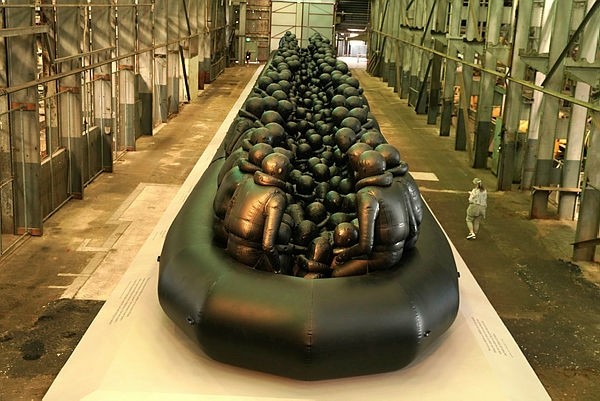 A view of the installation u201cLaw of the Journey,u201d featuring a giant inflatable boat filled with people wearing life jackets made from PVC, by Chinese contemporary artist Ai Weiwei at the 21st Biennale of Sydney.
by German Press Agency - DPA Mar 19, 2018 12:00 am

Australia's largest art exhibition began its three-month showing on March 16. Tens of thousands are expected to visit the Biennale of Sydney, with Chinese artist Ai Weiwei the most significant attraction.

Chinese artist Ai Weiwei's massive inflatable boat, housed on isolated Cockatoo Island in the Sydney harbor, is one of the top attractions at the Biennale of Sydney.

The 60-meter-long lifeboat featuring 300 refugee figures, called "Law of the Journey," is displayed in a shipyard warehouse of the former penal colony for Australia's first immigrant convicts which is now a UNESCO World Heritage Site.

The Chinese artist's work is one of the hundreds of exhibits at the three-month-long Biennale, which will feature artworks by 70 artists and collectives from 35 countries.

It started Friday across seven venues, including the Art Gallery of New South Wales and the Sydney Opera House.

"It is based on the idea of coexistence of the five elements of the universe - water, fire, wood, metal and earth - according to the Chinese philosophy of Wuxing, which is ever-changing but also same. I wanted the title to become a metaphor of the world today."

"The artists have been chosen to offer a panoramic view of how opposing interpretations can come together [...] and collectively reflect the movements, migration of people and cultures away from conflict in the 20th century across the world," she added.

It is Australia's oldest and most well-known contemporary art event, recognized for commissioning and showcasing innovative and thought-provoking Australian and international art.

One of the recurring themes in this year's Biennale is migration, which many artists reflect from personal experiences. Ai Weiwei's latest works are inspired by global refugee crises and harsh immigration policies.

"I'm still in this exiled state from my country, from China," said Ai, who now lives in Berlin.

"Law of the Journey," which has been launched to coincide with the Australia debut of Ai's powerful refugee film "Human Flow," was first shown at the National Museum in Prague, where it was on display from March 2017 until January.

His other artwork is a 2-ton crystal ball being shown at the Artspace Gallery in Woolloomooloo.

It is a metaphor which considers gazing into the complex future of our world amid its ongoing humanitarian crisis, Kataoka said.

Another artwork exploring migration and movement is Japanese artist Yukinori Yanagi's "Icarus Container," a labyrinthine tunnel made from shipping containers that use mirrors to reflect sunlight, representing capitalism and global distribution networks.

Interdisciplinary artist Brook Andrew, 47, an Indigenous Australian now a resident at Berlin's Kuenstlerhaus Bethanien, collaborated with four artists on an exhibit of five sculptures which represent the elements of the universe.

"The world is a richer place when you collaborate," he told dpa.

The exhibit "scrutinizes the dominance of Western colonial narratives," he said. "I am always looking for ultimate narrative. I have multiple identities. I am a child of a colony. It's not fixed."