Matter and meaning through black holes and universes 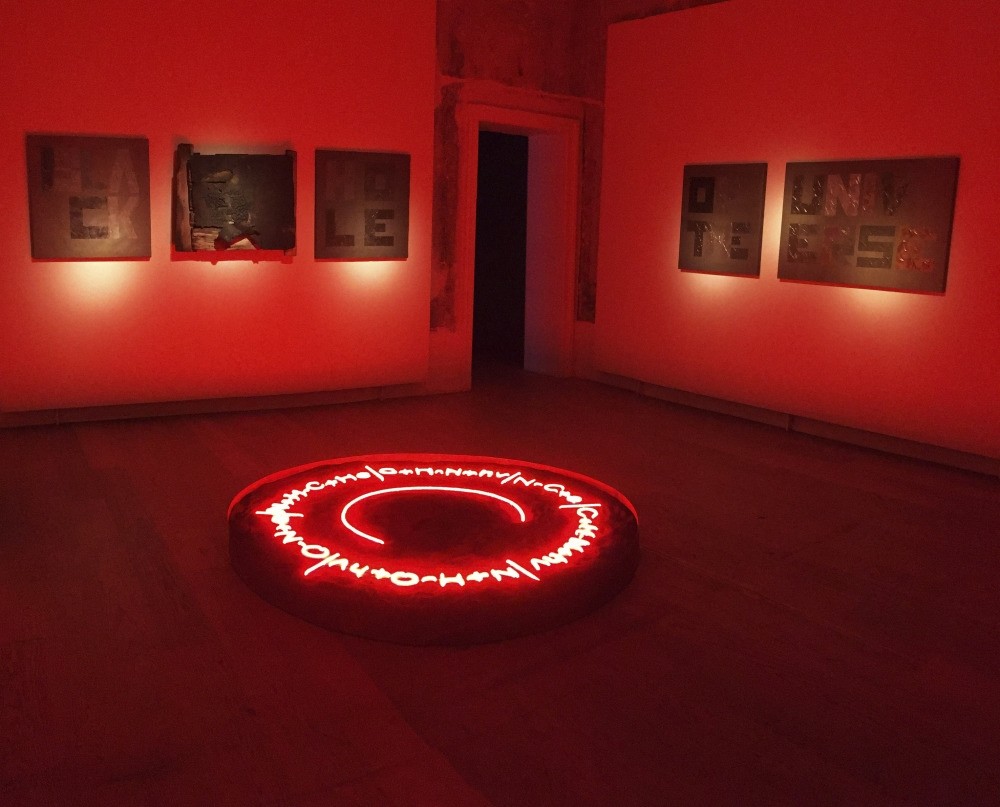 u201cKara Kumu201d investigates the images of darkness and closure and was inspired by Karakum Dessert and a crater called the Door to Hell.
by Cihad Caner Mar 21, 2018 12:00 am

Istanbul, my hometown, is in a constant transformation every time I visit it and is different than my memories. There is a famous saying among elderly Istanbulites "Nerede o eski İstanbul?" ("Where is the old Istanbul?"). Maybe I am also getting old; therefore I started to say the same.

Kara Kum (Black Sand) is the new solo exhibition of the artist Nil Yalter at Galerist curated by Melis Tezkan. Yalter picked Karakum Dessert and a crater called Door to Hell (A burning crater in the middle of Karakum Dessert in Uzbekistan) as a source for her research. Kara Kum shows new works of the artist, which investigates the images of darkness and closure, by putting the material transformation of burnt sand into black and a foundry in Hasköy, a neighborhood that is also in the process of urban transformation, to the center of the exhibition. Kara Kum can be visited until April 21 at Galerist. 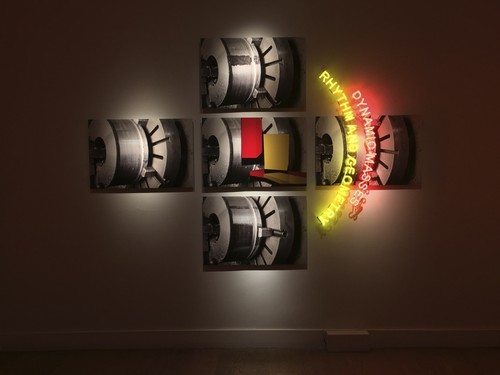 The show starts with an installation called "Prologue" in a small room that consists of wall size prints and 15 hourglasses that are placed on a pedestal and sound. My first impression was that time is stopped in this room, until I heard the voice of the artist in French from the speakers. This is a prologue, as we can also understand from the title of the work, because this is our first encounter with the black sand inside the hourglasses. The artist has the ability to freeze time and shows us an inquiry on images of darkness.

"Fire Wall" (2018) is the second work we see in the show, it is a five-channel, 1 minute and 10 seconds loop video installation placed on the wall that has a special structure. Yalter placed all the screens on the wall and then covered them with a wooden plaque structure to give the circular shape to the screens. It is obvious that videos are depicting scenes from the foundry workshops in Haskoy that use flame to produce products. It's hard to grasp the videos, but this ambiguity opens an abstract layer for the visitor where all the circular shape screens are becoming black holes and subatomic shapes. 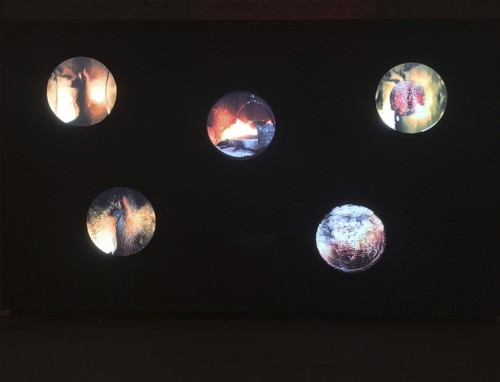 Nil Yalter's "Fire Wall" is a five-channel, 1 minute and 10 second loop video installation on a wall.

Yalter's neon installation "Black Sand"(2018) which is placed on the floor looks like her starting point for the show Door to Hell with all the flames we see. All the circular screens and the red neon installations are becoming a window to subatomic particles, a gate in between different dimensions and universes. The videos and the neon installation reminded me of the notion of existing and universe by Ibn al Arabi. He aligns well with what we know about subatomic space, the spiritual world (ghayb) is a subatomic space, everything in the physical world originates from there, all atoms begin from what occurred sub-atomically at the creation of the universe. If atoms did not exist we would not exist, when the universe was created everything began with the creation of subatomic particles that then formed atoms, and our world last of all, so the subatomic world is the barrier between existence and nonexistence. 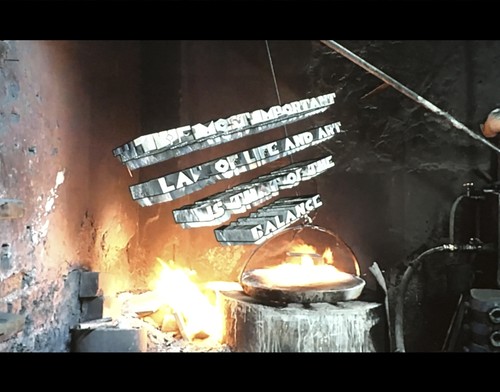 The epilogue of "Kara Kum" is a video called "Hasköy," depicting foundry workshops.

It is also quite interesting to see how the artist finds similarities with a sand-cast foundry workshop production process and the Dutch painter Piet Mondrian's paintings in her work "Dynamic Masses" (2018). This work directly referred to one of my favorite French Philosophers Bruno Latour's article called "Where Are the Missing Masses? The Sociology of a Few Mundane Artifacts" where he suggests a way to balance the society, "To balance our accounts of society, we simply have to turn our exclusive attention away from humans and look also at nonhumans." This is what Yalter is doing in the show; she is distributing our attention also on non-humans, that the flame is one of the core non-humans for the balance of the world. The 25 minute video "Hasköy" (2018) is the epilogue of the show. It depicts sand-cast foundry workshops in Hasköy neighborhood. We see a process of making products in these workshops, which are about to clear away due to urban transformation in the neighborhood. Most of the footage is close up and the video has the aesthetic of German filmmaker Harun Farocki, the genre in between documentary and video art. On the other hand, in some parts of the video, there are objects and sentences coming out of the image on the wall and they look like they are the projection of the objects physically created in the video.