Turkish artist explores myths and visions in ‘The Flood' 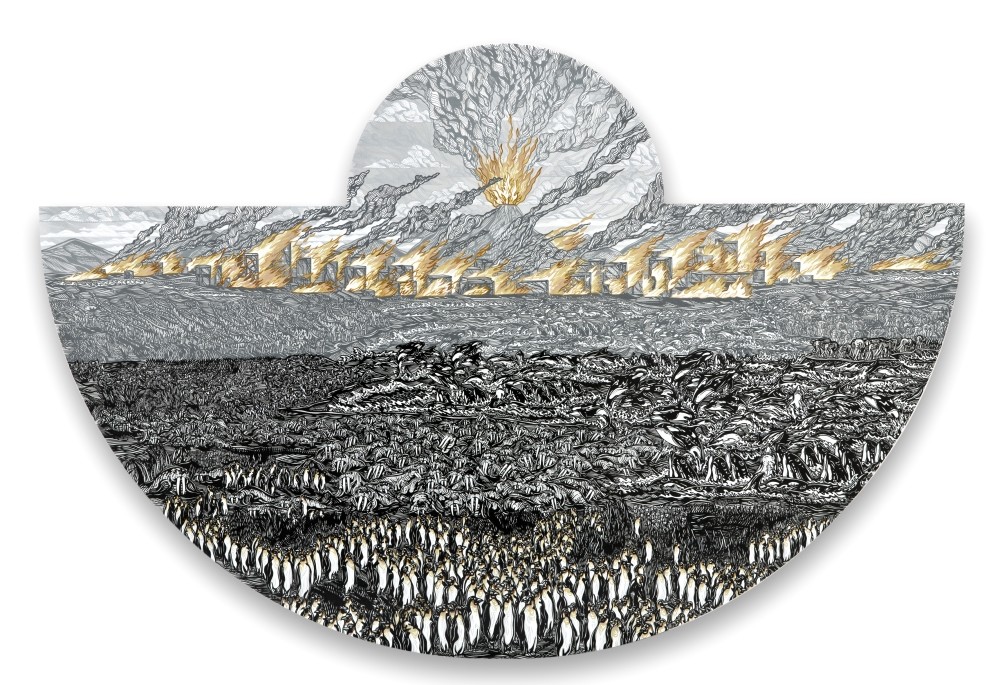 "The Flood" is an ambitious show both in intellectual scope and artistic execution. Emin Mete Erdoğan has produced a set of aluminum plates, sculptures and acrylics that focus on the biblical theme of the Great Flood. With a look toward a dystopian future, his visions belong to an unsettling alternate world.

This combination of myth and futurism invigorates the show, Erdoğan's second at Istanbul's x-ist, and introduces to it an element of expressionism. His biblical scenes have an uncanny resemblance to modern catastrophes of mass displacement and forced deportations. The Great Flood explored so meticulously here may as well describe the humanitarian crisis from the civil war in Syria.

"What kind of a scene would we have to deal with if the Great Flood happened today?" This is the question that drives Erdoğan's work. The artist says he wanted to interrogate and analyze the Great Flood, and his pieces make for unsettling viewing.

"In this series we generally see herds moving toward the human figures in the center or the structure in the form of a globe consisting of equilateral triangles that I used as the representation of human mind," the artist says. "This selection of composition indicates to man's positioning oneself just in the middle of the cosmos and having the illusion of holding the destiny of all the living beings in the world."

Beautiful Sadness IV is part of a series of sculptures scattered into the gallery space that resembles a submarine with its long, narrow corridor. In Beautiful Sadness I, men and women appear to prepare for the coming catastrophe, and their anxious postures are at times alarming.

Beautiful Sadness II, another sculpture in the series, builds a system between humans and animals. Tortoises, rhinos and sacrificial sheep are placed systematically inside a ritual whose rules and purpose remain unclear.

"The artist is impressed by how the Great Flood contains both an annihilation and a new beginning, and interprets the fact that throughout human history one encounters written narration in 2,000 different regions and time periods from the Sumerians to the Egyptians, Babylon to the divine religions as a story of a common history of humankind," the show's curators say.

"The artist thinks that as all the living beings on the world we are just in the middle of a pre-apocalyptic scenario similar to the Great Flood due to global warming and rising ocean levels and we share this, and while he interprets the Great Flood as a past narrative, he actually also depicts today's world. Including different materials into his production process, the artist will be sharing for the first time his sculptures and reliefs made of polyester casting." 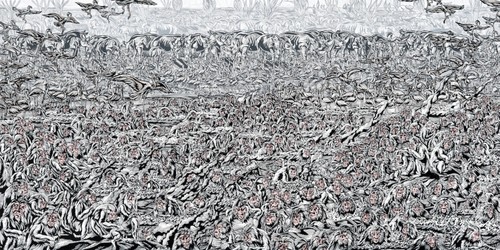 From American artist Edward Hicks's 1846 painting "Noah's Ark" to Thomas Cole's "The Subsiding of the Waters of the Deluge" and Gustave Dore's Bible illustrations, the story of Noah's ark inspired numerous works of classic art.

In Max Ernst's "Europe after the Rain" (1940) a storm that represents Nazism destroys Europe. In Leonardo da Vinci's "Deluge Drawings," floods destroy cities and represent the artist's interest in the force of water. In "The Shape of Water," this year's Best Picture winner at the Oscars, the most interesting scene features a bathroom filled with so much water that once its door is unlocked, a flood washes through a building.

In her text for the exhibition catalog, Merve Akar Akgün, an editor and critic based in Istanbul, points to the discovery of 6,000-year-old Sumerian clay tablets by British archaeologist Austin Henry Layard in 1849, as inspiration behind the show.

"Today Emin Mete Erdoğan borrows the form of the Sumerian clay tablet and creates reliefs," Akgün writes. "The artist by way of these reliefs questions the antrophic principle, which takes the human as the being at the center of the universe and the notion that the universe is designed and created for the human and thereby critiques this desire to constantly place oneself at the center of the universe. We are neither bird nor elephant, we are human. We cannot ignore our fixation with the idea that humans are the main actors on the timeline of evolution and that other creatures are mere extras."

In acrylic ink, Erdoğan's tone softens and even becomes humorous. "Follow the Water III," the massive panorama of animals waiting to be saved from the Great Flood, features moments of comic relief. Flamingoes dance happily while an ape ponders his uncertain future. Another one sleeps peacefully, happy to comply with the world's fate.

In such works the artist's tone combines binaries such as the epic and the mundane and the tragic and the mocking. This is a refreshing balance, with the grave tone of some of the pieces on display a bit over the top while the more playful elements energize the exhibition.

A graduate of Marmara University's Fine Arts Department, Erdoğan had two previous shows in Istanbul, "Entangled Cern Plans" at Sanatorium, and "Entroforming" at x-ist. He also had pieces at group exhibitions, "No 3" at Nesrin Esirtgen Collection, "The Break" at Kare Sanat and "Detail" at Blok Art Space.

"Erdoğan's work proposes adapting metaphors that constantly remind us to consider turning points, systems of thought and belief and further synthesize and consider the totality to face up to ourselves," Akgün, the critic, writes. The plates, sculptures and acrylics that constitute "The Flood" also ask us to face the precariousness of our future and the unsettling possibility that the disasters of our future may resemble those of the past.